Lake Nipigon is the big white area above Lake Superior

/ˈnɪpɨɡɒn/; French: lac Nipigon) is the largest lake entirely within the boundaries of the Canadian province of Ontario (since four of the five Great Lakes are split between the U.S. and Canada). It is sometimes described as the sixth Great Lake. Lying 260 metres (853 ft) above sea level, the lake drains into the Nipigon River and thence into Nipigon Bay of Lake Superior. The lake and river are the largest tributaries of Lake Superior. It lies about 120 kilometres (75 mi) northeast of the city of Thunder Bay, Ontario.

The lake is noted for its towering cliffs and unusual green-black sand beaches composed of the fine particles of a dark green mineral known as pyroxene. The lake basin provides an important habitat for woodland caribou.

As the last Ice Age was ending, Lake Nipigon was, at times, part of the drainage path for Lake Agassiz.

The French Jesuit Claude Allouez celebrated the first mass beside the Nipigon River May 29, 1667. He visited the village of the Nipissing Indians who had fled there during the Iroquois onslaught of 1649-50. In the Jesuit Relations the lake is called lac Alimibeg, and was subsequently known as Alemipigon or Alepigon. In the 19th century it was frequently spelled as Lake Nepigon. The may have originated from the Ojibwe language Animbiigoong, meaning 'at continuous water' or 'at waters that extends [over the horizon].' Though some sources claim the name may also be translated as 'deep, clear water,' this description is for Lake Temagami. Today, the Ojibwa bands call Lake Nipigon Animbiigoo-zaaga'igan.

The 1778 Il Paese de' Selvaggi Outauacesi, e Kilistinesi Intorno al Lago Superiore map by John Mitchell identifies the lake as Lago Nepigon and its outlet as F. Nempissaki. In the 1807 map A New Map of Upper & Lower Canada by John Cary, the lake was called Lake St Ann or Winnimpig, while the outflowing river as Red Stone R. Today, the Red Rock First Nation located along the Nipigon River still bears the "Red Stone" name. In the 1827 map Partie de la Nouvelle Bretagne. by Philippe Vandermaelen, the lake was called L. Ste Anne, while the outflowing river as R. Nipigeon. In the 1832 map North America sheet IV. Lake Superior. by the Society for the Diffusion of Useful Knowledge, the lake was called St Ann or Red L., while the outflowing river as Neepigeon and the heights near the outlet of the Gull River as Neepigon Ho. By 1883, maps such as Statistical & General Map of Canada by Letts, Son & Co., consistently began identify the lake as Lake Nipigon.

In 1683 Daniel Greysolon, Sieur du Lhut established a fur trading post on Lake Nipigon named Fort Tourette after his brother, Claude Greysolon, Sieur de la Tourette. The Alexis Hubert Jaillot map of 1685 (Partie de la Nouvelle-France) suggests that this fort was somewhere in Ombabika Bay at the northeast end of the lake where the Ombabika River and Little Jackfish River (Kabasakkandagaming) empty. (A copy of this map may be viewed at Brock University Map Library) The post remained active to the end of the French regime as part of the pays d'en haut.

On 17 April 1744, the Count de Maurepas, Minister of the Marine, informed the Canadian officials that Jean de La Porte was to be given the "fur ferme" (i.e. the profits) of Lac Alemipigon from that year forward as a reward for his services in New France.

After the Treaty of Paris (1763), the area passed into the hands of the British, and the Hudson's Bay Company expanded its trading area to include the Lake. Although it was considered to be within British North America, it was not until 1850 that the watershed draining into Lake Superior was ceded formally by the Ojibwe Indians to the Province of Canada (see Robinson Treaty, 1850, also known as the Robinson Superior Treaty). A four square mile reservation was set aside on Gull River near Lake Nipigon on both sides of the river for the Chief Mishe-muckqua (from Mishi-makwa, "Great Bear"). In 1871 Lake Nipigon was included in the new Thunder Bay District, Ontario.

In 1943 Canada and the United States agreed to the Ogoki diversion which diverts water into Lake Superior that would normally flow into James Bay and thence into Hudson Bay. The diversion connects the upper portion of the Ogoki River to Lake Nipigon. This water was diverted to support three hydroelectric plants on the Nipigon River. The diversion is governed by the International Lake Superior Board of Control which was established in 1914 by the International Joint Commission.

Lake Nipigon Provincial Park is located on the east side of Lake Nipigon. In 1999 the park boundary was amended to reduce the park area from 14.58 to 9.18 square kilometres (3,603 to 2,268 acres). The area was deregulated and transferred to the Government of Canada for a reserve for the Sand Point First Nation. 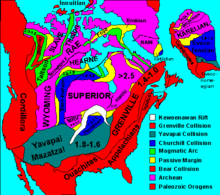 Abstract mafic rocks at Lake Nipigon give evidence of rift-related continental basaltic magmatism during the Midcontinent Rift System event 1,109 million years ago. Great sills up to 150 to 200 metres (490–660 ft) thick are also related with the rifting event, forming cliffs hundreds of meters high. The mafic and ultramafic intrusions centered on Lake Nipigon represent a failed arm of the main rift called the Nipigon Embayment.

The first nations CBC TV series Spirit Bay was filmed on the lake at the Biinjitiwabik Zaaging Anishnabek First Nation Reserve in the mid-1980s.