The original version was created for the Commodore Amiga and was released in November 1985. It was eventually ported to other platforms, but only had industry standard status on the Amiga.

DPaint was the product of an in-house art development tool called Prism. As Silva added additional features to Prism, it was turned into a showcase product to coincide with the Amiga's debut in 1985. After release, it was quickly embraced by the Amiga community and became the defacto graphics (and later animation) editor for the platform. It was used almost ubiquitously in the making of Amiga games, animation and demoscene productions. Amiga manufacturer Commodore International later commissioned EA to create version 4.5 AGA for bundling with the new Advanced Graphics Architecture chipset (A1200, A4000) capable Amigas. Version 5 was the final release after Commodore's bankruptcy in 1994.

With the development of Deluxe Paint, EA introduced the ILBM and ANIM file format standards for graphics. Although widely used on the Amiga, they never gained widespread end user acceptance on other platforms, but were heavily used by game development companies. Dpaint was used by Lucasarts to make graphics for their adventure games such as Monkey Island, and is the source of the name of the main character in the Monkey Island series, Guybrush Threepwood[1] - the character's name derived from the file used to store his image data. Contrary to popular belief however, the original source sprite was not named "guy.brush" as the file extension used was ".bbm" and not ".brush". The file was in fact named "guybrush.bbm", the "brush" portion of the file name being included by the artist behind the character, Steve Purcell.[2]

Early versions of Deluxe Paint were available in both protected and non copy-protected versions, the latter retailing for a slightly higher price. This copy-protection was later dropped. Deluxe Paint was part of a series of products from the Electronic Arts Tools group—later moved to the ICE (for Interactivity, Creativity, and Education) group—which included such Amiga programs as Deluxe Music, Deluxe Video, and the Studio series of paint programs for the Macintosh. 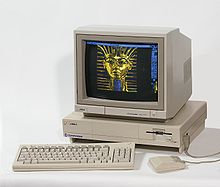 Unlike modern graphics editors, such as Adobe Photoshop, most Amiga graphics editors were heavily oriented towards the bitmapped and bitplaned display modes of the native Amiga chipset, and in Deluxe Paint this was most prominent.

The Amiga natively supports indexed colour, where a pixel's colour value does not carry any RGB hue information but instead is an index to a colour palette (a collection of unique colour values). By adjusting the colour value in the palette, all pixels with that palette value change simultaneously in the image or animation. Creative artists could use this in their animation by using "colour cycling".

Deluxe Paint III added support for Extra Halfbrite. It also added editing modes that allowed one to stencil certain colors, and perform blurs on the stencils in such a way as to produce an effect that with skill could be be made to look similar to light-sourcing in a 3D program. Deluxe Paint III also added the ability to create cel-like animation, and animbrushes. These let the user create cel-like animations, as well as the ability to pick up a section of an animation as an "animbrush", which can then be placed onto the canvas while it animates. Deluxe Paint III was one of the first paint programs to support animbrushes. These allow you to copy a section of the animation and paste it into another area of the screen and animation. Similar to copy and paste, except you can pick up more than one image.

Deluxe Paint IV, which did not feature Silva as the Lead Programmer, was significantly less elegant and crashed more often than its predecessors, though it did offer significant new features like non-bitplane-indexed Hold-and-Modify support. Version 4.5 AGA, which appeared the following year, addressed the stability issues along with providing support for the new A1200/A4000 AGA machines and a revamped screen mode interface. It appeared in both standalone and Commodore-bundled versions.

The final release of Deluxe Paint, version 5, had support for true 24-bit RGB images. However, using only the normal AGA native chipset, the 24-bit RGB colour was only held in computer memory, the on-screen image still appeared in indexed colour.

The heavy reliance on an indexed colour model allowed for a rather different way of working, not generally found on many popular paint programs since. The intimate linking of palette and image data made DPaint an excellent tool for creating bitmapped icons, animation and game graphics in the days before true colour images became commonplace.

For example, transparency was as simple as selecting a background colour index (a single right click on the palette GUI to change). Colours could be locked from editing by use of a stencil (a list of colour indexes whose pixels should not be altered in the image data). And simple colour-cycling animations could be created using contiguous entries in the palette. It was also easy to change the hue and tone of a section of the image by altering the corresponding colours in the palette. (The specific section would need to use a dedicated part of the palette for this technique to work.)

Brushes can be cut from the background by using the box, freehand, or polygon selection tools. They can then be used in the same manner as any other brush or pen. This functionality is simpler to use than the "stamp" tool of Photoshop or Alpha Channels as provided in later programs. Brushes can also be rotated and scaled, even in 3D. After a brush is selected, it appears attached to the mouse cursor, providing an exact preview of what will be drawn. This allows precise pixel positioning of brushes, unlike brushes in Photoshop CS3 and lower, which only show an outline.

Animations stored in IFF ANIM format were delta compressed (only differences between current and previous frames are stored), making animations even smaller and faster on playback.

The most successful PC version was Deluxe Paint II Enhanced 2.0, which was compatible with ZSoft's PC Paintbrush PCX image format file. It supported the CGA, EGA, MCGA and VGA IBM-compatible PC graphic cards, the Hercules, Tandy and Amstrad proprietary video cards and the main of the first Super VGA video cards (manufacturer dependent) modes, enabling it to support up to 800×600 pixel screen resolution with 256 (from 262,144) colors and 1024×768 pixels with 16 colors.

The MS-DOS conversion was carried out by Brent Iverson and its enhanced features were by Steve Shaw.

Its sister product Deluxe Paint Animation (only for 320×200 pixels and 256 colors) was widely used, especially in the videogame industry.

The music video for the 2003 single "Move Your Feet" by Danish alternative dance duo Junior Senior was created entirely using the Amiga version of Deluxe Paint by the art collective Shynola.[3]

The webcomic "Unicorn Jelly" was completed over the course of three years using Deluxe Paint 2, one panel posted every night at midnight. [4]