It was originally developed as a response to the first paintbrush program for the IBM PC, PCPaint, which had been released the prior year by Mouse Systems, the company responsible for bringing the mouse to the IBM PC for the first time.

In 1984 Mouse Systems had released PCPaint to compete with Apple Paint on the Apple II computer and was already positioned to compete with MacPaint on Apple Computer's new Macintosh platform. Unlike MacPaint, PCPaint enabled users to work in color.

When Paintbrush was released the following year, PCPaint had already added 16-color support for the PC's 64-color Enhanced Graphics Adapter (EGA), and Paintbrush followed with the PC's advantage of EGA support as well. (The EGA supported 64 colors, of which any 16 could be on the screen at a time in normal use.)

Also following the lead of Mouse Systems and PCPaint, one of the first pieces of software on the PC to use a mouse, the earliest versions of Paintbrush were distributed (by Microsoft) with a mouse included. Both Microsoft and their competitor Mouse Systems bundled their mice with Mouse Systems' PCPaint in 1984. At Christmas 1984, amidst record sales volumes in the home computer market, Microsoft had created a "sidecar"[1] bundle for the PCjr, complete with their mouse, but with their competitor's product PCPaint. With the release of Paintbrush the following year, Microsoft no longer needed to sell the software of their competitor in the PC mouse hardware market in order to have the same market advantage. 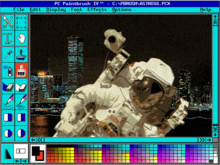 Unlike most other applications before and since, Paintbrush version numbers were recorded with Roman numerals.

Along with the release of Paintbrush, ZSoft, following in the footsteps of PCPaint's Pictor PIC format, the first popular image format for the PC, created the PCX image format.

The first version of Paintbrush only allowed the use of a limited EGA 16-color palette. By version III, 256 colors and extended SVGA resolutions were supported through the use of hundreds of custom-tailored graphics drivers. The PCX format grew in capability accordingly. By its final version, Paintbrush was able to open and save PCX, TIFF, and GIF files.

A screenshot of PC Paintbrush 5.0+ for DOS.

Paintbrush was later adapted to the Windows 3.0 operating system as Publisher's Paintbrush. Publisher's Paintbrush allowed importation of images via TWAIN-based capture devices like hand-held and flatbed scanners. Support for 24-bit color and simple photo retouching tools were also added, as well as the ability to open more than one image at a time. The program also added many simulations of real-world media such as oil paints, watercolors, and colored pencils, and it had a number of new smudge tools that took advantage of the increased color depth. Both PC Paintbrush and Publisher's Paintbrush were supplemented and later replaced with the more budget oriented PhotoFinish.

After ZSoft was sold, resold, and then finally absorbed by The Learning Company, an extremely low priced and simple graphics application was released under the title PC Paintbrush Designer.