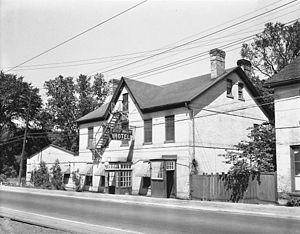 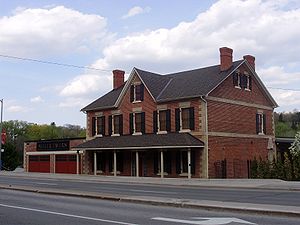 The Miller Tavern was one of many 19th century inns along Yonge Street in Toronto, Ontario (see John Finch's Hotel).

Originally called the York Mills Hotel, the three storey building dates to the 1860s. A barn to house horses was located on the north side of the building. The hotel was popular for travellers looking for a drink.

The hotel was renamed The Jolly Miller after a local mill owner. It later catered to gamblers and was often raided.

The hotel was renovated and turned into a seafood restaurant and renamed with the current name.

There has been a tavern at this spot as long as there has been a Yonge Street. Early in the 19th century, a tavern keeper here named Vallière was offering food, drink and shelter to soldiers returning from the battle area during the War of 1812. His was only one of many taverns that for years lined what was little more than a muddy trail leading north from the Town of York. In fact, Yonge Street boasted more taverns than any other road in the province. There were drinking establishments, on one side or another, every half-mile between Toronto and Lake Simcoe—how else could weary travelers survive such a difficult journey? Yonge Street was particularly hazardous for coaches heading down the treacherous hill that led from Hoggs Hollow towards the welcoming tavern at the bottom. Sliding down the slippery slope was a hair-raising experience for passengers, and frequently tree branches were tied to the wheels to prevent them from tipping.

The York Mills Hotel, known today as the Miller Tavern, was a hotel built circa 1857 to replace an earlier establishment which was destroyed by fire. The new hotel was constructed by John and William Hogg, who developed the Hoggs Hollow subdivision on their York Mills property in 1856.

The York Mills Hotel was a focal point for the mill village, and a prominent feature of the commercial core of the community. It was a stopping place for the mail stage and omnibus between Toronto and Richmond Hill.

Like other 19th century inns and taverns, the hotel went through a succession of proprietors and periods of changing fortunes. During Prohibition in the 20th century, the building housed a gambling den that was eventually closed down following several police raids. In 1930, the old hotel was remodelled with the intent of creating a prestigious dining establishment. It was renamed The Jolly Miller, a name that remains in use to the present day. The sign board depicting a Jolly Miller was painted by noted Canadian artist C.W. Jefferys.

In more recent times, The Miller continued to function as a hotel and tavern, offering accommodation until about 1964. A skating rink was built on the flats behind the building, with a change room provided in the neighbouring Hogg General Store, destroyed by fire in 1978.

Architecturally, the Jolly Miller Tavern evoked the Georgian Survival style of the 19th century buildings in Ontario. Constructed of red brick, laid in a common bond pattern, it measures 2½ storeys high and is based on a rectangular plan. It features a high-pitched gabled roof with boxed eaves. Generous amounts of wall space in relation to the size of the windows can be noted on most elevations. Elements such as the plinth, belt courses, quoins, jack arches, and ornate pendant frieze (east elevation) are highlighted in buff-colored brick. The south wall is intact as are the north, east and west walls above the ground floor level. The historic portion of the building has a rubblestone foundation that provides a basement under the west half of the building.

The symmetrical, 5-ranked front facade had a steep, centred cross-gable, containing a 6-over-6 sash. The four corbelled chimneys at the gable-ends are restored versions of the originals. At one time, a hip-roofed verandah supported by several posts spanned across the entire front elevation.

The much-altered interior originally had a centre hall plan. Vestiges of two fireplaces are thought to remain within broad projections on the south wall. Original interior elements of the building that also remain intact include mouldings, trims and doors located in the attic storey.

The Jolly Miller assumed great significance as the only 19th century commercial structure remaining on its original site in the locale. Moreover, the long history associated with the Tavern and its connection to the historic community of York Mills and neighbouring valley reinforces its special importance as a Yonge Street landmark in North York.

After a 10-month, $3 million renovation by Sunburst Design, the historical landmark has been updated and upscaled while still maintaining its 19th-century roots. Complete with an Oyster Lounge, one of the city's largest outdoor patios and a glass-enclosed, heated veranda, The Miller Tavern now offers a casual, comfortable dining environment.