Sony Centre for the Performing Arts

Sony Centre for the Performing Arts

The Sony Centre for the Performing Arts is a major performing arts venue in Toronto, Ontario, Canada.

The Sony Centre For The Performing Arts is Canada’s largest soft-seat theatre. The centre opened as the O’Keefe Centre on 1 October 1960, and has played host to a variety of international attractions and stars.

The theatre, designated a heritage building by the City of Toronto, underwent renovations to restore its iconic features such as the marquee canopy and York Wilson’s lobby mural, The Seven Lively Arts. Restoration of the wood, brass and marble that were hallmarks of the original facility was undertaken, along with audience seating, flooring upgrades, new washrooms, and reconfigured lobby spaces. Following two years of renovations and restoration work, the Sony Centre reopened its doors on 1 October 2010, fifty years to the date of the first opening night performance. 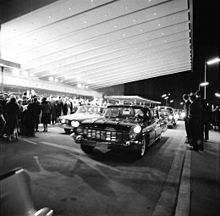 The idea for a performing arts centre that could serve the needs of an increasingly dynamic city predates the building's opening by almost 20 years. In the mid-1940s, Nathan Phillips issued a challenge to Toronto industrialists to underwrite the cost of a multipurpose centre for theatre, music and dance. Response to Phillips' challenge was not immediate. E.P. Taylor, the racehorse-loving head of the O'Keefe Brewing Company and Argus Corporation, was already one of the city's most generous philanthropists, and in 1954, he offered to build a performing arts centre that would not only serve the needs of local institutions but to increase the diversity of entertainment options available in Toronto.

Taylor assigned one of his key executives, Hugh Walker, to oversee building what was to be known as The O'Keefe Centre in its first 36 years. The O'Keefe Centre opened on 1 October 1960 with a red-carpet gala. The first production was Alexander H. Cohen's production of the pre-Broadway premiere of Lerner and Loewe's Camelot, starring Richard Burton, Julie Andrews and Robert Goulet. Camelot would prove to be just the first in a long and continuing line of spectacular productions, featuring such artists as Ethel Merman, Mickey Rooney, Angela Lansbury, Alfred Drake, Yul Brynner, Carol Channing, Pearl Bailey, and Katharine Hepburn. Even Rudolf Nureyev, more familiar to Centre audiences in his frequent role as a ballet superstar, tried his hand at musical theatre as the Siamese autocrat in The King and I.

Other great performing legends have graced the Sony Centre stage in a range of solo shows, revues and jazz spectaculars: Louis Armstrong, Duke Ellington, Marlene Dietrich, Diana Ross, Anne Murray, Tom Jones, Danny Kaye, Judy Garland, Sammy Davis, Jr., Bill Cosby, Jack Benny, Liza Minnelli and Liberace. Large-scale ballet and dance is another performing art well suited to the Centre's ample stage. Apart from regular seasons offered by The National Ballet of Canada at the Sony Centre from 1964 to 2006 and frequent visits by the Royal Winnipeg Ballet and Les Grands Ballets Canadiens, the theatre has welcomed a diverse range of international dance companies. One of the earliest, Les Ballets Africains, offered the unusual sight of topless women. Other visitors have included Britain's Royal Ballet, New York City Ballet, Dance Theater of Harlem, the Dutch National Ballet, the National Ballet of Cuba, Alvin Ailey American Dance Theater, Ballet Folklorico of Mexico, and Kirov and the Bolshoi. It was during a 1974 Bolshoi visit that a young Mikhail Baryshnikov, on loan from the Kirov, bolted from the Centre's stage door, down The Esplanade and into a waiting getaway car and freedom.

Like The National Ballet, The Canadian Opera Company also made the Sony Centre its home stage, from as early as 1961 to 2006. Many of Canada's greatest singers as well as a host of international opera stars have performed for Centre audiences in COC productions. In addition, although touring opera is now rare, in earlier days the Sony Centre played host to The Met and to such towering voices as those of Birgit Nilsson, Placido Domingo and Renata Scotto.

In 1996, the building was renamed in recognition of a major gift from the Canadian software company, Hummingbird Communications Ltd. The $5-million donation allowed the Centre to undertake a number of capital improvements and repairs, among them the installation of an elevator and an acoustic reinforcement system for the auditorium. In September 2007, Sony bought the naming rights to the Centre and a 10-year partnership was born. When the Ballet and Opera moved to the Four Seasons Centre in 2006, it meant a more open programming schedule which has allowed the Centre to place even greater emphasis on being an important community resource where people from all backgrounds can gather to share their distinct and vibrant cultures. Notable performances that reflect this mandate include the Last Empress with its dramatic, musical portrayal of an important figure in Korean history, the Virsky Ukrainian Dance Company, South Africa's Soweto Gospel Choir, Shaolin Warriors, Ricky Cheng, David Rudder & Friends and Club Tropicana.

In 2006, the Sony Centre received approval from the City of Toronto for the development of a high-rise condominium building beside the Centre. Designed by architect Daniel Libeskind (who also designed the Crystal addition to the Royal Ontario Museum), the L Tower is currently under construction on the southwest corner of the property. The Sony Centre closed on 26 June 2008 to begin the theatre renovations which were unveiled on 1 October 2010.

Designed by Peter Dickinson, the Sony Centre is a distinctive building and an example of a mid-twentieth century Modern performing arts venue. It is four stories high and is broken up into three main forms: the entrance block, auditorium and fly tower. The central form of the building is highly symmetrical with an open floor plan. Structurally, the Sony Centre is not overly complicated and uses steel trusses and concrete to hold the majority of the building together. In addition to the structure, the Sony Centre auditorium houses a very sophisticated acoustic system, which gives the audience the sense that the sound is surrounding them (Canadian Architect 18).

When it comes to materiality, the majority of the original materials are still in the building today. Materials used include: Alabama limestone, glazing, granite, copper, bronze, Carrara marble, carpet, cherry plywood panels and Brazilian Rosewood. The Sony Centre is very diverse with its range of materials and employs them in such a way that they are not overshadowed by the unique forms of the building. The interior also features a grand double-height foyer with coffered ceilings, a 30 metre wide mural by the famous Toronto-born artist R. York Wilson, cantilevering staircases that appear to be floating, bright bronze auditorium doors, and a fan-shaped auditorium with a huge curving balcony.