Mount de Sales Academy is an independent Catholic, college preparatory school in Macon, Georgia. It was founded in 1876 by five Sisters of Mercy as a boarding school for girls across the South, it became coeducational in 1959 and closed boarding school operations in 1963. The Sisters served in an administrative capacity until 2002 when the first lay head of school in the school's history was selected by the Mount de Sales Academy Board of Trustees. The school is operated by its trustees and continues to be sponsored by the Sisters of Mercy. It is part of the Roman Catholic Diocese of Savannah.

Over 130 years after its founding, the school remains at its original location atop Beall's Hill, the former home of Georgia Governor George W. Towns (1801–1854), in downtown Macon and overlooking the antebellum city. Opened in 1998, Cavalier Fields athletic complex is located apart from the academic campus. Mount de Sales—often referred to as MDS—is the oldest school in Macon and was the first school in Middle Georgia to desegregate in 1963.

While it has a Catholic heritage, the school has enrolled students of all faiths. It has nearly 700 students in grades 6-12. Its athletic teams as well as academic, literary, debate and thespian clubs, nicknamed the Cavaliers, compete in the Georgia Independent School Association.

In 1871, a group of five Sisters of Mercy from Columbus, Georgia began a small school known as the Academy of the Sacred Heart Jesus on the corner of Fourth and Walnut streets in Macon, Georgia.[2] The school taught students of a variety of faiths, and along with a free school that was operated out of the basement of Saint Joseph Church, predated the Bibb County public school system by nearly a year. The free school became one of the area's first public schools in 1872.[3] 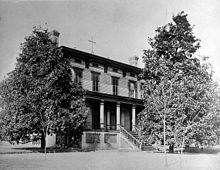 When the mother house of the Sisters relocated from Columbus to Macon in 1876, the Sisters, area Catholics and other donors provided funds to purchase the former governor's mansion on Beall's Hill on the corner of Orange and Columbus streets as the new home for the sisters and novices as well as the boarding students at the Academy.[2] The name of the school was changed to Mount de Sales, in honor of Saint Francis de Sales, and the new school was chartered as a women's junior college with the right to confer degrees by the state of Georgia in 1876. The school grew quickly, and a second building was completed by 1877. When the school's first graduation exercises were held in 1882, Mount de Sales had expanded to comprise three divisions: primary, preparatory and senior, and was a boarding school for girls in grades one through twelve, housing girls from around the southeastern United States and Cuba.[3]

Mount de Sales discontinued its primary school in 1936, but continued to serve as a girls' secondary school for both boarding and day students until 1959 when the first boys were admitted as day students, and the girls' boarding school closed in 1963. The school's movement toward becoming a coeducational facility was at the request of the Bishop of Savannah, and the first coeducational graduating class included 16 boys of 46 total graduates in 1963. The fall of 1963 also marked the racial integration of Mount de Sales, making it the first school in Middle Georgia to do so.[3]

The admission of boys and the racial integration of the school was the culmination of the expansion and modernization of the school that began in the 1950s. In addition to the already existing Cavalier Hall, newly constructed buildings on the campus included St. Joseph's Hall, McAuley Hall, Burke Hall, Mercy Hall, and De Sales Hall. In 1970, the original convent and boarding school building was demolished after the Sisters moved to a new convent building that had been erected on College Street. Mount de Sales' expansion and modernization continued at a steady pace throughout the last quarter of the 20th century. In 1975, the middle school was reinstated with the re-addition of an eighth grade to the school. A seventh grade was re-added in 1988, and in 2004 a sixth grade was added, though membership for this class is split between Mount de Sales and the nearby elementary school, St. Joseph Catholic School.[3]

In 1990, a new classroom building, Sheridan Hall, was completed and dedicated on the site of the original boarding school building. In addition to classrooms, the building houses a computer lab, administrative offices and a chapel. The building was the newest and most modern building on the campus until the completion of the Zuver Performing Arts Center in 2004. The site for the school's athletic complex, located near Macon State College, was acquired and dedicated in 1996, and was fully completed in 2002 with the opening of the field house. The athletic complex, named Cavalier Fields, is home to the school's football stadium and practice fields, soccer, baseball and softball fields, tennis courts and track. The site also includes a concession stand and patio as well as a practice cross country course. In the 2010 Cross country season the course will be used for racing.[3]

The completion of the Zuver Center in 2004 expanded the classroom space for art, drama, and music programs.[3]

In 2008, a new student parking lot was added on Columbus Street and there are plans for a new, $4.7 million middle school building that will be built where Burke Hall and Bonaventure Hall are currently located and require those buildings to be removed.[4]