The "Old World Warblers" is the name used to describe a large group of birds formerly grouped together in the bird family Sylviidae. The family held over 400 species in over 70 genera, and were the source of much taxonomic confusion. Two families were split out initially, the cisticolas into Cisticolidae and the kinglets into Regulidae. In the past ten years they have been the subject of much research and many species are now placed into other families, including the Acrocephalidae, Cettiidae, Phylloscopidae, and Megaluridae. In addition some species have been moved into existing families or have not yet had their placement fully resolved. A smaller family of warblers, together with some babblers formerly placed in the family Timaliidae and the parrotbills, are retained in a much smaller family Sylviidae.

Most Old World Warblers are of generally undistinguished appearance, though some Asian species are boldly marked. The sexes are often identical, but may be clearly distinct, notably in the genus Sylvia. They are of small to medium size, varying from 9 to 16 centimetres in length, with a small, finely pointed bill. Almost all species are primarily insectivorous, although some will also eat fruit, nectar, or tiny seeds.[1]

The majority of species are monogamous and build simple, cup-shaped nests in dense vegetation. They lay between two and six eggs per clutch, depending on species. Both parents typically help in raising the young, which are able to fly at around two weeks of age.[1]

In the late 20th century, the Sylviidae were thought to unite nearly 300 small insectivorous bird species in nearly 50 genera. They had themselves been split out of the Muscicapidae. The latter family had for most of its existence served as perhaps the ultimate wastebin taxon on the history of ornithology.[citation needed] By the early 20th century, about every insectivorous Old World "songster" known to science had at one point been placed therein, and most continued to be so.

Only after the mid-20th century did the dismantling of the "pan-Muscicapidae" begin in earnest. However, the Sylviidae remained a huge family, with few clear patterns of relationships recognisable. Though by no means as diverse as the Timaliidae (Old World babblers) (another "wastebin taxon" containing more thrush-like forms), the frontiers between the former "pan-Muscicapidae" were much blurred. The largely southern warbler family Cisticolidae was traditionally included in the Sylviidae. The kinglets, a small genus in a monotypic family Regulidae, were also frequently placed in this family. The American Ornithologists' Union includes the gnatcatchers, as subfamily Polioptilinae, in the Sylviidae.[2]

Sibley & Ahlquist (1990) united the "Old World warblers" with the babblers and other taxa in a superfamily Sylvioidea as a result of DNA-DNA hybridisation studies. This demonstrated that the Muscicapidae as initially defined were a form taxon which collected entirely unrelated songbirds. Consequently, the monophyly of the individual "songster" lineages themselves was increasingly being questioned.

More recently, analysis of DNA sequence data has provided information on the Sylvioidea. Usually, the scope of the clade was vastly underestimated and only one or two specimens were sampled for each presumed "family". Minor or little-known groups such as the parrotbills were left out entirely (e.g. Ericson & Johansson 2003, Barker et al. 2004). These could only confirm that the Cisticolidae were indeed distinct, and suggested that bulbuls (Pycnonotidae) were apparently the closest relatives of a group containing Sylviidae, Timaliidae, cisticolids and white-eyes.

In 2003, a study of Timaliidae relationships (Cibois 2003a) using mtDNA cytochrome b and 12S/16S rRNA data indicated that the Sylviidae and Old World babblers were not reciprocally monophyletic to each other. Moreover, Sylvia, the type genus of the Sylvidae, turned out to be closer to taxa such as the Yellow-eyed Babbler (Chrysomma sinense) (traditionally held to be an atypical timaliid) and the Wrentit (Chamaea fasciata), an enigmatic species generally held to be the only American Old World babbler. The parrotbills, formerly considered a family Paradoxornithidae (roughly, "puzzling birds") of unclear affiliations also were part of what apparently was a well distinctive clade.

Cibois suggested that the Sylviidae should officially be suppressed by the ICZN as a taxon and the genus Sylvia merged into the Timaliidae (Cibois 2003b), but doubts remained. Clearly, the sheer extent of the groups concerned made it necessary to study a wide range of taxa. This was begun by Beresford et al. (2005) and Alström et al. (2006). They determined that the late-20th-century Sylviidae united at least 4, but probably as many as 7 major distinct lineages. The authors propose the creation of several new families (Phylloscopidae, Cettiidae, Acrocephalidae, Megaluridae) to better reflect the evolutionary history of the sylvioid group.

The Sylviidae, in turn, receive several taxa from other families. Nonetheless, the now-monophyletic family has shrunk by nearly 80% for the time being, now containing 55 species in 10 genera at least. It is entirely likely however that with further research, other taxa from those still incertae sedis among its former contents, the Timaliidae, the Cisticolinae, or even the Muscicapidae will be moved into this group.

True warblers (or sylviid warblers) and parrotbills. A fairly diverse group of smallish taxa with longish tails. Mostly in Asia, to a lesser extent in Africa. A few range into Europe; one monotypic genus on west coast of North America. 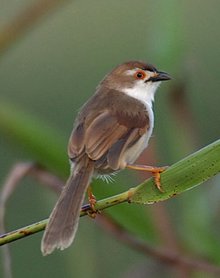 Chrysomma sinense, the Yellow-eyed "Babbler", is a sylviid closely related to parrotbills 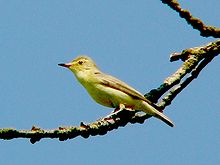 Marsh- and tree warblers or acrocephalid warblers. Usually rather large "warblers", most are olivaceous brown above with much yellow to beige below. Usually in open woodland, reedbeds or tall grass. Mainly southern Asia to western Europe and surroundings ranging far into Pacific, some in Africa. The genus limits are seriously in need of revision; either most species are moved into Acrocephalus, or the latter is split up though there is presently insufficient knowledge as to how. 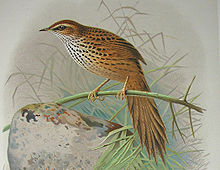 The Black-capped Donacobius Donacobius atricapillus, which was long considered an aberrant wren or mockingbird is apparently quite closely related, and might possibly be considered the only American species of this family.

Typical bush warblers and relatives or cettiid warblers. Another group of generally very drab species, tend to be smaller and shorter-tailed than Megaluridae. Usually frequent shrubland and undergrowth. Continental Asia, and surrounding regions, ranging into Africa and southern Europe. 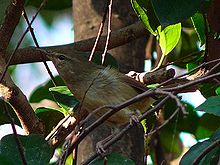 Leaf-warblers or phylloscopid warblers. A group very variable in size, often vivid green coloration above and yellow below, or more subdued with greyish-green to greyish-brown plumage. Catch food on the wing fairly often. Eurasia, ranging into Wallacea and Africa. 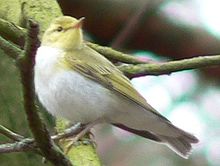 Taxa that have not been studied. Most are likely to belong to one of Sylvioidea families listed above. Those in the Australian-Pacific region are probably Megaluridae. These taxa are listed in the sequence used in recent years.

[still use obsolete taxomony. EoL has Panurus picture, which is as wrong as it can be!]