The Orphean Warbler, Sylvia hortensis, is a typical warbler of the genus Sylvia. This species occurs in summer around the Mediterranean, through Turkey and the Caucasus and extending into Central Asia. It is migratory, wintering in sub-Saharan Africa. It is a rare vagrant to northern and north-western Europe. 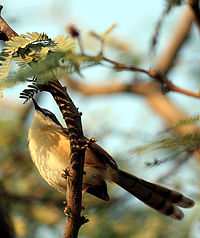 At 15–16 cm length - somewhat larger than a Blackcap - this is one of the largest species of typical warblers. The adult males have a plain grey back and whitish underparts. The bill is long and pointed and the legs black. The male has a dark grey head, black eye mask and white throat. The iris is white. Females and immatures have a paler head and buff underparts; their grey back has a brownish tinge. The iris is dark in young birds. The song is a series of warbling liroo-liroo and scolding notes.

These small passerine birds are found in open deciduous woodland. 4-6 eggs are laid in a nest in a bush or tree. Like most "warblers", Orphean Warbler is an insectivore.

Other common names are "greater pettychaps" or "European garden warbler". The latter should be by all means avoided as the Orphean Warbler does not occur in most parts of Europe, whereas the Garden Warbler proper does. In Italy, it is also known as beccafico ("figpecker") as they were believed to gorge themselves on figs when these are in season. Such birds were considered delicacies and consequently much hunted and snared.

Balkans via Turkey, the Caucasus and surrounding regions to Central Asia
Bill longer and stronger on average, though varies much. Little reddish wash on underparts, resulting in a crisper division between white belly and grey flanks. Song is more varied, approaching Nightingale in richness.(Snow 1998)

The Orphean Warbler is probably most closely allied to the Red Sea Warbler, as well as the Brown and Yemen Warblers which are sometimes placed in Parisoma. They together with the Lesser Whitethroat group seem to form a distinct clade of typical warblers. The species therein do not appear much alike at first glance, but they all have prominent white throats, lack rufous wing-patches, and usually having dark sides to the head.(Helbig 2001, Jønsson & Fjeldså 2006)