Crystalis
Not to be confused with Crystalise or Crystals.
"God Slayer" redirects here. For other uses, see God-slayer (disambiguation).

Crystalis, known in Japan as God Slayer: Haruka Tenkū no Sonata (ゴッド・スレイヤー はるか天空のソナタ?, lit. "God Slayer: Sonata of the Far-Away Sky"), is an action RPG/action-adventure video game produced by SNK for the Nintendo Entertainment System. It was released on April 13, 1990 in Japan and later that July in the United States. Though Crystalis never became a runaway hit, it is now considered a cult classic.[1] The game's initial success prompted a release for the Game Boy Color by Nintendo Software Technology in 2000, which is generally considered more of a remake than a simple port.[2][3][4] Many changes were made to the story, music, and other aspects of the game, upsetting many fans of the original.[5]

The game begins with a man's awakening from a cryogenic sleep one hundred years after a global nuclear war.[6] Even though he is unable to recall his name or who he was, he begins to discover that he may be the key to save this world from destruction.[7] Aided by four wise sages and a mysterious woman, he rises up against the tyrannical Draygonia Empire to ensure that humanity ultimately has a future.[8]

Crystalis takes place in a post-apocalyptic world,[9] one hundred years after a global thermonuclear war has reverted civilization to a primitive, medieval existence populated with fierce mutated creatures.[5] Science and advanced technology have been abandoned, though the old ways of magic have survived.[5][10] The survivors of the terrible destruction built a floating "Tower" to prevent any future cataclysms, as its occupants would have the power to govern the world due to the Tower's weapons systems.[5][8] A man known as Emperor Draygon, however, has revived the forbidden ways of science and combined them with magic.[9][10] With these skills, he controls the world's last remaining military power and seeks to conquer what's left of the planet by attempting to enter the Tower.[5][8]

The protagonist awakens with no memory, but, guided by four wise sages, gradually learns that the world is sinking into turmoil due to the Draygonia Empire's destructive influence.[5] Entrusted with the Sword of Wind, he seeks to aid Mesia, another survivor from his time, and to combine the four elemental Swords of Wind, Fire, Water, and Thunder into the legendary sword, Crystalis.[5] Together, they must defeat Draygon before he uses the Tower to achieve his evil ambitions.[8]

The gameplay of Crystalis is similar to that of other action RPGs.[10] The world is presented in a top-down perspective[9] so the player can move smoothly in eight directions using the control pad.[8] There are two action buttons; one is used for attacking with a sword, and the secondary button is mapped to a chosen action, such as a magical power or an item from the player's inventory.[10] The start and select buttons bring up the status screen and the inventory menu, respectively.[8] In addition, the player can equip various suits of armor and shields.[7][8] Defeating monsters allows the player to gain experience points and levels, which boost his health, defense, and attack strength.[10] 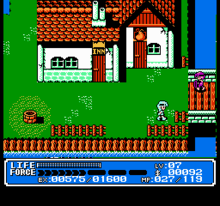 The primary means of defeating monsters is through the use of the four swords scattered throughout the game[8] (the fifth sword, Crystalis, is only obtained at the very end). The swords are capable of both normal slashes and powered-up attacks that launch energy projectiles.[7][10][11] Each of the four swords is imbued with a distinct elemental power (wind, fire, water, and thunder), making each sword more effective than the others in various situations.[8][10] The elemental nature of each sword also provides a necessary means of traversing otherwise impassable obstacles;[5] certain barriers succumb to the power blasts of individual swords, and the Sword of Water creates a bridge of ice across some shallow, narrow sections of rivers.[10], also some enemies are immune to certain types of elements and must be killed using their opposite element(Ice creatures are weak against fire). Also some bosses and enemies require a certain level for you to even get a hit on them, even if you use the correct sword.

The method of control is similar to the earlier NES action-adventure game, The Legend of Zelda.[2][10][12] The main difference is that the emphasis is much less on puzzle-solving and more on the combat.[2] The player is also not limited to moving in the four cardinal directions, but can also move diagonally, allowing for smoother control;[8] in this way, the mechanics are similar to those in the later The Legend of Zelda: A Link to the Past for the SNES (and its 2D sequels).[13] In the Game Boy Color version, the player can also jump over enemies,[14] and certain enemies can puddle and slide under the sword's reach, such as those in The Legend of Zelda: Link's Awakening. The gameplay of Crystalis is perhaps best described as having Zelda-style combat blended with traditional RPG spell-casting and earning of experience points.[15]

The anonymous male protagonist (named Simea by default in the Game Boy Color version) and his female accomplice, Mesia, are scientists who were cryogenically frozen, to be released when the tower began to activate.[5] The protagonist is assisted by four sages named Zebu, Tornel, Asina, and Kensu, primarily in learning magic spells and gaining information about the world and the quest.[10] They are encountered frequently throughout the game, and the player can seek their advice using the Telepathy spell.[5][7][10] In the GBC version, the sages are each responsible for creating one of the four swords:[10] Zebu for Wind, Tornel for Fire, Asina for Water, and Kensu for Thunder. The original game does not mention who forged the ancient swords.

There are also four recurring boss characters, "Dragonia's Finest Four."[16] Comprising this group are a warrior named General Kelbesque, Sabera the Witch, the Swordsman Mado, and Karmine the Wizard. Each of them has a distinct elemental weakness, and with the exception of Karmine, each is encountered twice during the adventure.[17] Though not the final adversary in the game, Emperor Draygon is the ultimate antagonist and the root of all of evil in Crystalis.[8] After defeating him in his human form, the hero encounters him again and reveals his true, dragon-like form. After defeating Draygon a second time, the hero gains access to the Tower for a final showdown[5] with a machine called DYNA.

Nearly ten years after the game's initial release, Nintendo gained the license to re-release Crystalis for the Game Boy Color on June 26, 2000. This version, however, is a significantly different game, exemplified by a different opening sequence.[4] The nature of the Tower's origin and its purpose were fundamentally altered, with the Tower now being a weapon created by the game's antagonist,[3] and the protagonist has been elevated to a hero of ancient prophecy destined to save the world.[5]

Other major changes include an almost completely new soundtrack,[14] re-translation differences (for example, Draygon is now known as Dragonia,[6] as in the Japanese version) and rewriting of story-items and events[2][6] (Kensu's Body and the dialogue in the Dwarven village, for example). The game now has a longer end due to the incorporation of a new dungeon,[10] the Tower dungeon being redone, and re-ordering of the ultimate and penultimate boss battles,[5] excluded from the original game due to space constraints (Draygon's second form serves as the final boss in the remake as opposed to DYNA).[15] Also, a digital voice was added to state the name of each sword upon discovery.[6][14]

Unlike the original version, enemies are no longer immune to certain elemental swords,[5] negating the strategic element of continually switching between weapons during the game.[14] The reduced resolution of the Game Boy Color screen, compared to that of the NES, results in a field of view far smaller than in the original, making the GBC port considerably more difficult,[15] as it is much more difficult to see approaching enemies in time to deal with them, and some enemies can attack the player from off-screen.[14] Due to these and various other modifications to the plot, soundtrack, and gameplay, the Game Boy Color version is largely seen as an inferior release.[4][14][15]

The original NES version of Crystalis was praised for its advanced graphics[7][11][16] and high quality soundtrack,[8][16][18] and also for its elaborate plot.[5][7][16] The main criticism of the game was its repetitive gameplay,[11] as many enemies can be overcome by continuous rapid pressing of one button.[2] Some reviewers have also mentioned flawed collision detection,[2][12] which sometimes allows enemies to harm the player without visibly coming in contact with him.[8][9] In December 2005, Nintendo Power ranked the NES release of Crystalis at #115 in a list of the 200 best games ever to appear on a Nintendo system, the "NP Top 200".[19]

The Game Boy Color port was not received as favorably, the majority of reviews citing it as an inferior copy, due to reduced screen resolution[14][15] and altered plot,[2][3][5][14] as well as the fact that the game is seen as "dated" compared to more recently made games.[15] The music is regarded as one of the port's worst aspects,[3][5][14] said to be "annoying"[2] and "begs to be turned down."[12] The port was given an 8.0 rating by the gaming site IGN, however, which denotes an "impressive" game, but the reviewer in question had not played the original game. IGN criticized the game for being too linear and having a low difficulty level but praised the game for its large world and visually detailed "cinema cutscenes".[12] GameSpot also gave the Game Boy Color port an 8.0, saying of the original NES release: "Crystalis' sheer depth - and the quality of its presentation - was without peer, and it is still regarded as a milestone title in the [action RPG] genre."[10]

Influences from other media

There are several aspects of Crystalis that are based on specific elements in other media. The game's story appears to be somewhat influenced by that of the Hayao Miyazaki anime film Nausicaä of the Valley of the Wind,[1][15][16] and some aspects of the art design appear to be, as well (for example, the giant insect boss in the swamp appears almost identical to the Ohmu giant insects seen in the movie).[5] The "Valley of Wind village, Leaf"[20] also may have been influenced by Nausicaä. Two of the characters from Crystalis are subtle nods to earlier SNK characters who later became part of The King of Fighters series; the latter two sages, Kensu and Asina, are based on Kensou Sie and Athena Asamiya from the Psycho Soldier arcade game.[5] In The King of Fighters series, Kensou is well-known for his obsession with Athena,[21] a quality demonstrated even in Crystalis.