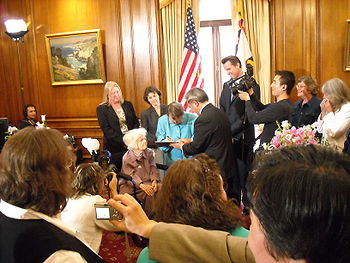 Wedding of Martin and Lyon

Martin and Lyon met in 1950, became lovers in 1952, and moved in together on Valentine's Day 1953 in an apartment on Castro Street in San Francisco. They had been together for three years when they founded the Daughters of Bilitis (DOB) in San Francisco in 1955, which became the first social and political organization for lesbians in the United States. They both acted as president and editor of The Ladder until 1963, and remained involved in the DOB until joining the National Organization for Women (NOW) as the first lesbian couple to do so.

Both women worked to form the Council on Religion and the Homosexual (CRH) in northern California to persuade ministers to accept homosexuals into churches, and used their influence to decriminalize homosexuality in the late 1960s and early 1970s. They became politically active in San Francisco's first gay political organization, the Alice B. Toklas Democratic Club, which influenced Dianne Feinstein to sponsor a citywide bill to outlaw employment discrimination for gays and lesbians. Both served in the White House Conference on Aging in 1995.

They were married on June 16, 2008 in the first same-sex wedding to take place in San Francisco after the California Supreme Court's decision in In re Marriage Cases legalized same-sex marriage in California.[2] Martin died from complications of an arm bone fracture in San Francisco.[3]

Del Martin was born as Dorothy Louise Taliaferro on May 5, 1921, in San Francisco. She was the first salutatorian to graduate from George Washington High School. She was educated at the University of California, Berkeley and at San Francisco State College, where she studied journalism, and she earned a Doctor of Arts degree from the Institute for Advanced Study of Human Sexuality. She was married for four years to James Martin and retained his name after their divorce.[4][5] She had one daughter, Kendra Mon. Martin died on August 27, 2008 at UCSF Hospice in San Francisco from complications of an arm bone fracture. She was 87 years old.[1] Her wife, Phyllis, was at her side. San Francisco mayor Gavin Newsom ordered that the flags at City Hall be flown at half-staff in her honor.[6]

Phyllis Lyon was born on November 10, 1924 in Tulsa, Oklahoma.[7] She holds a degree in journalism from the University of California, Berkeley, earned in 1946. During the 1940s, she worked as a reporter for the Chico Enterprise-Record, and during the 1950s, she worked as part of the editorial staff of two Seattle magazines.[5]

Martin and Lyon met in Seattle in 1950 when they began working for the same magazine. They became lovers in 1952 and entered into a partnership in 1953 when they moved to San Francisco together.[4][5][7] Many years later, Lyon and Martin recalled how they learned to live together in 1953. "We really only had problems our first year together. Del would leave her shoes in the middle of the room, and I'd throw them out the window," said Lyon, to which Martin responded, "You'd have an argument with me and try to storm out the door. I had to teach you to fight back."[8]

On February 12, 2004, Martin and Lyon were issued a marriage license by the City and County of San Francisco after mayor Gavin Newsom ordered that marriage licenses be given to same-sex couples who requested them.[9]

The license, along with those of several thousand other same-sex couples, were voided by the California Supreme Court on August 12, 2004.

Del is 83 years old and I am 79. After being together for more than 50 years, it is a terrible blow to have the rights and protections of marriage taken away from us. At our age, we do not have the luxury of time.
—Phyllis Lyon

However, they were married again on June 16, 2008, after the California Supreme Court ruled that same-sex marriage was legal. Once again they were the first couple married in San Francisco, in fact the only couple married that day by the mayor.[10]

In 1955, Martin and Lyon and six other lesbian women formed the Daughters of Bilitis (DOB), the first national lesbian organization in the United States. Lyon was the first editor of DOB's newsletter, The Ladder, beginning in 1956. Martin took over editorship of the newsletter from 1960 to 1962, and was then replaced by other editors until the newsletter ended its connection with the Daughters of Bilitis in 1970.[4][5]

Within five years of its origin, the Daughters of Bilitis had chapters around the country, including Chicago, New York, New Orleans, San Diego, Los Angeles, Detroit, Denver, Cleveland and Philadelphia. There were 500 subscribers to The Ladder but far more readers, as copies were circulated among women who were reluctant to put their names to a subscription list.[9] For their pioneering work on The Ladder, Martin and Lyon were among the first inductees into the LGBT Journalists Hall of Fame, which was established in 2005 by the National Lesbian & Gay Journalists Association. Lyon and Martin remained involved in the DOB until the late 1960s. The Daughters of Bilitis, which had taken a conservative approach to helping lesbians deal with society, disbanded in 1970 due to the rise of more radical activism.[9]

Martin and Lyon have been active in the National Organization for Women (NOW) since 1967. Del Martin was the first openly lesbian woman elected to NOW.[11] Lyon and Martin worked to combat the homophobia they perceived in NOW, and encouraged the National Board of Directors of NOW's 1971 resolution that lesbian issues were feminist issues.[9]

The Alice B. Toklas Democratic Club, named after San Francisco-born author Alice B. Toklas, was formed on Valentine's Day 1972 at the offices of the Society for Individual Rights near 6th and Market Streets in San Francisco. The founding member was James Foster, who was the first openly gay man to speak at a national political convention. He spoke to the need for inclusion of gays and lesbians in the political process. Though Lyon and Martin were not able to attend this first meeting, they became members soon thereafter. The first motion the club passed was in support of the marijuana initiative. Among the founding members were Gary Miller and Ron Bentley. The purpose of the club is to support candidates who are supportive of gay and lesbian rights and help them get elected to public office. Among its earlier presidents were Jo Daly and Gary Miller (1975). In 1975 the club endorsed George Moscone for mayor over Dianne Feinstein. The club changed its name to the Alice B. Toklas Gay and Lesbian Democratic Club.

Lyon-Martin Health Services was founded in 1979[12] by a group of medical providers and health activists as a clinic for lesbians who lacked access to non-judgmental and affordable health care. Named after Phyllis Lyon and Del Martin, the clinic soon became a model for culturally-sensitive community-based health care. Since 1993, Lyon-Martin also has provided case management and primary healthcare in programs specifically designed for very low-income and uninsured women with HIV.

In 1989, Martin and Lyon joined Old Lesbians Organizing for Change. In 1995 they were named delegates to the White House Conference on Aging, Martin by Senator Dianne Feinstein and Lyon by Congresswoman Nancy Pelosi.[13] 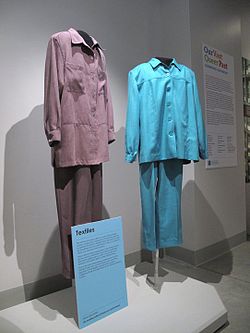 Pantsuits worn by Del Martin and Phyllis Lyon to their weddings in San Francisco in 2004 and 2008; on display at the GLBT History Museum, 4127 18th St., San Francisco. Photo: GLBT Historical Society.

Books are written by both Martin and Lyon except where noted:

In 2003 filmmaker JEB (Joan E. Biren) released a documentary film on the couple, No Secret Anymore: The Times of Del Martin and Phyllis Lyon, available from Frameline and broadcast on both the Sundance Channel and PBS. The 1993 documentary Last Call at Maud's also featured Martin and Lyon.

The extensive records of Lyon and Martin's professional and activist pursuits—including the administrative files of the Daughters of Bilitis—are preserved at the GLBT Historical Society in San Francisco. The collection is fully processed and is available for use by researchers. The Online Archive of California (a project of the California Digital Library) offers the complete finding aid.