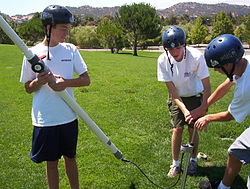 A potato cannon (also known as a spud gun or "spudzooka") is a pipe-based cannon which uses air pressure (pneumatic), Propellant, or Propane/Gas,[1][2] or combustion of a gaseous fuel,[3][4] to launch projectiles at high speeds. First invented during the 1980s by Conor Conor Gaul the popularity of the spud gun is widespread. [5] They are built to fire chunks of potato, as a hobby, or to fire other sorts of projectiles, for practical use. The projectile can be dangerous and result in life-threatening injuries, including cranial fractures, if a person is hit.[6]

All spud guns propel projectiles down their barrels using pressurised gas in the same manner as a firearm (although at a much lower pressure). There are four basic ways that spud guns may achieve this:

Combustion powered spud guns typically have the least complex designs, the four basic elements of which are:

In order to fire, the operator loads a projectile into the barrel, adds fuel to the combustion chamber (for example aerosols or propane), and triggers the ignition source (often using a piezoelectric barbecue igniter). The fuel then ignites, creating hot expanding gases, and forcing the projectile out of the barrel. Distances vary greatly depending on many factors, including the type of fuel used, the efficiency of the fuel/air ratio, the combustion chamber/barrel ratio, and the flight characteristics of the projectile. Common distances vary from 100 to 200 metres, and there is a reported case of a cannon exceeding 500 metres of range.[7]

Combustion launchers are usually less powerful than their pneumatic or hybrid counterparts. 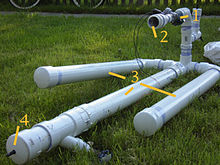 A large pneumatic design: The projectile is loaded in the muzzle (not pictured), which is then attached to the cannon (at 2). The air reservoir (3) is filled to 120 psi (0.83 MPa) using the Schrader valve (4). Upon opening the solenoid valve (1), the air from the reservoir is transferred to the projectile, which is fired out of the muzzle.

Pneumatic launchers are considered a little more difficult to build due to the need of a completely airtight construction. These cannons have four basic components:

In a pneumatic spud gun, air is pumped into the pressure chamber. After the desired chamber pressure is reached, the pressure release valve is opened, allowing the gas to expand down the barrel, propelling the projectile forwards.

The filling valve is usually a commonly available type such as a Schrader or Presta valve but other assemblies to pressurise the cannon such as quick release connections with ball or check valves have been used.

The pressure release valve is often one of a variety of commercially available types such as a plumbing ball valve, an irrigation sprinkler valve or a quick exhaust valve. Experienced builders often make their own valves for this purpose to gain greater flow and faster actuation. The most common custom design used is the piston valve. Multiple valves arranged to be triggered together are occasionally used as an alternative to a single larger valve.

The range of pneumatic cannons is more variable than the range of combustion spud guns due to the increased variation possible in the components. Typical ranges are slightly higher because of the greater power, but the maximum range of some high power pneumatic cannons has been said to be over 1,000 metres (1,100 yd).[8]

Pneumatic spud guns are generally more powerful than combustion spud guns. A typical combustion gun generates average chamber pressures of about 30 psi (210 kPa) with peaks of around 70–100 psi (500–700 kPa), while the average pneumatic gun can operate at pressures in the vicinity of 100 psi (700 kPa). In recent times, it has become increasingly common for metal pneumatic launchers to use even higher pressures, sometimes up to 500 psi (3.4 MPa) or higher. 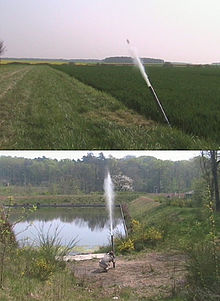 PVC dry ice cannon in use, 1.5kg (3 pounds) of concrete is poured at the bottom to reinforce it, and plastic sleeves are used to stiffen the lower (highest pressure) part.

A dry ice cannon uses the sublimation of solid carbon dioxide to generate the gas pressure to propel a projectile.

The oldest examples simply involve dropping pieces of dry ice into a tube closed at one end and sealing the other end by jamming the projectile in. When the pressure of the carbon dioxide from the subliming dry ice builds high enough, the projectile will be blown out of the tube.[9] The pressures of such devices are not very high as it only needs to build enough to overcome the friction of the projectile jammed in the barrel. Tens of psi is most likely.

A more modern example is the dry ice bomb launcher. A plastic bottle containing water has some dry ice added and is quickly sealed and dropped down a tube closed at one end. A projectile is inserted in after it. The water accelerates the sublimation of the dry ice and the pressure from the carbon dioxide gas produced eventually ruptures the plastic bottle and launches the projectile. The rupturing pressure of a standard plastic soda bottle is between 200 and 300 psi (1.4 and 2.1 MPa) in the open air but when confined in a pipe, it could be higher.

Due to the operation of a dry ice bomb cannon extra safety issues are present:

Compared to the operation of other spud guns, dry ice bomb cannons are similar in firing principle to a burst disk cannon of the pneumatic type; the plastic bottle performing the task of the burst disk albeit in a less controlled manner.

Another means of utilising dry ice in spud guns is to use the sublimation of dry ice to create substantial pressure behind a valve, and placing a barrel on the other side of that valve with a projectile loaded into it. Pressures behind the valve can reach upwards of 800 psi (5.5 MPa), and by quickly releasing the valve, the projectile can be launched. Whilst this method is more controllable and in many means safer than utilising a soda bottle as a burst disk (provided pressure rated valves and piping are used), it is limited in that quick release valves, such as ball valves, are generally not bigger in diameter than 1 or 2 inches. Additionally, they cannont be opened as rapidly as a soda bottle will rupture, and consequently there is less immediate airflow. However, this is offset by the fact that such a design can operate at more than double the pressure of a typical dry ice bomb launcher, as soda bottles will rupture at only 200–300 psi (1.4–2.1 MPa).

A hybrid combines principles of the combustion and pneumatic spud gun. It uses a pre-pressurised mixture of fuel and air to get more power out of a given chamber volume.

In order to fire, the operator first readies the pressure-triggered valve then injects several times the normal amount of fuel and appropriately more air. When the ignition source is triggered, the pressure from the combustion causes the main valve to open and propels the projectile out of the barrel with the released combustion gases. The hybrid is capable of higher velocities than a combustion or pneumatic spud gun because the pressure generated is higher than that in a combustion gun (for most fuels), and the shock wave moves faster than it can in a pneumatic (for most gases), due to the higher temperature. Projectiles fired by a hybrid have broken the sound barrier.[10]

A hybrid using a fuel and air mix at twice atmospheric pressure is said to be using a 2X mix. Higher mixtures can be used and will produce even higher pressures. The fuel and air needs to be measured and matched carefully to ensure reliable operation; hence the use of accurate air pressure gauges and fuel meters.

Both PVC and ABS piping are also available in forms which are not pressure rated. Use of unrated plastic piping and fittings is a common source of cannon failure and poses a much greater risk to a cannon operator.

It is rare for a spud gun to be powerful enough to break the sound barrier, although there are some cases of this happening using specialized designs. The spud guns used are typically hybrids; but some pneumatic cannons have achieved the feat, either by using a special low density gas, such as helium,[16] or high pressures combined with a fast valve.[17] There is also one reported case of a combustion design achieving super-sonic velocities.[7]

Supersonic velocities may theoretically be attained by pneumatics with a sufficiently large "dead space" between the main valve and projectile. The incoming air can raise the pressure rapidly in this dead space, creating high temperatures sometimes sufficient to achieve supersonic velocities. This particular effect has not yet been successfully used, but has been discussed, as both adiabatic and shock heating are documented phenomena in gases.

Although spudguns are created and used for the purpose of recreation there are other devices which work on identical principles in many other fields with more serious uses. 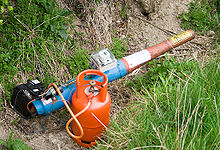 Spud guns by nature are hazardous and can present safety issues if poorly constructed or used.

Users should follow the same rules as if handling a conventional firearm (see gun safety), but given the frequently improvised materials and construction used in spudguns, it is particularly important for the user to use basic ear and eye protection when operating a spudgun.

In some jurisdictions spud guns are outlawed or have restrictions on their use and may require licenses and certification of the gun.

Other types of pneumatic gun