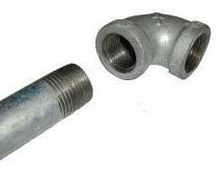 Threaded pipe and elbow. The pipe has a male NPT thread, while the elbow's is female.

Threaded pipes can provide an effective seal for pipes transporting liquids, gases, steam, and hydraulic fluid. These threads are now used in materials other than steel and brass, including PTFE,[2] PVC, nylon, bronze and cast iron.

The taper on NPT threads allows them to form a seal when torqued as the flanks of the threads compress against each other, as opposed to parallel/straight thread fittings or compression fittings in which the threads merely hold the pieces together and do not provide the seal. However, a clearance remains between the crests and roots of the threads, resulting in a leakage around this spiral. This means that NPT fittings must be made leak free with the aid of thread seal tape or a thread sealant compound. (The use of tape or sealant will also help to limit corrosion on the threads, which otherwise can make future disassembly nearly impossible.)

There is also a semi-compatible variant called National Pipe Taper Fuel (NPTF) also called Dryseal American National Standard Taper Pipe Thread, defined by ANSI B1.20.3, designed to provide a more leak-free seal without the use of teflon tape or other sealant compound. NPTF threads are the same basic shape but with crest and root heights adjusted for an interference fit, eliminating the spiral leakage path.

Sometimes NPT threads are referred to as MPT ('Male Pipe Thread'), MNPT, or NPT(M) for male (external) threads; and FPT ('Female Pipe Thread'), FNPT, or NPT(F) for female (internal) threads. An equivalent designation is MIP (Male iron pipe) and FIP (Female iron pipe). Also the terms NPS and NPSM are sometimes used to designate a straight, not tapered, thread. (this should not be confused with NPS meaning Nominal Pipe Size)

NPT and NPS threads have a 60° included angle and have a Sellers thread form (flattened peaks and valleys).

A female iron connection has a tapered thread, which thins out to the end of the pipe. As the fitting is tightened, the ever-decreasing thread depth means that the connection becomes watertight. To properly seal the fitting, paste thread sealant or PTFE (polytetrafluoroethylene) tape wrapped around the thread is required.