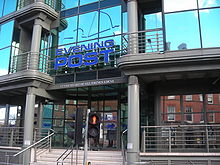 The Nottingham Post (formerly the Nottingham Evening Post) is an English tabloid newspaper which serves Nottingham, Nottinghamshire and parts of Derbyshire, Leicestershire and Lincolnshire.[1]

The Post is published between Monday and Saturday each week, and costs 38p. The paper is owned by the Northcliffe Newspapers Group, part of the Daily Mail & General Trust, and was formerly "Campaigning Newspaper of the Year".

From time-to-time the newspaper includes special features which focus on a particular aspect of life in Nottingham. An example of this was the paper's Muslims in Nottingham series in April 2007. This consisted of a week-long series of interviews and articles in both the newspaper and on the Evening Post website. They focused on Nottingham's Muslim community, giving them the opportunity to express their views of life in the city.

The first edition of The Evening Post was printed by Thomas Forman on 1 May 1878. It was sold for ½d and was four pages long.

In 1963, the Post's main competitor, the Nottingham Evening News, was closed and merged with the Post. Also, the city's two morning papers, the Guardian and the Journal, were merged into The Guardian Journal, which survived until 1973, when it was closed during a period of industrial turmoil in the company.

During the protracted dispute, some Post journalists launched their own newspaper, receiving moral support from Brian Clough, then manager of Nottingham Forest.

The writer Graham Greene was a sub-editor on The Nottingham Journal before joining The Times and, subsequently, launching his career as a novelist.

Over the years, several Post journalists moved to Fleet Street. Among them were Robert Bolton of The Sun, Robert Stephens of the Evening Standard and John Marquis of Reuters and Thomson Newspapers, who later went on to become an author and editor of the Bahamas' best-selling daily, The Tribune. Marquis was also voted Provincial Journalist of the Year in the 1974 National Press Awards (now British Press Awards) and was for many years London Sports Editor and Chief Boxing Correspondent of the Thomson newspaper empire, covering many Muhammad Ali fights. The late political sketchwriter Frank Johnson (Daily Telegraph and The Spectator) was briefly a Post journalist, while well-known pop music and sports writer Richard Williams trained on the Post in the early 1960s. Another Post reporter, BBC regional broadcaster John Barsby, became president of the National Union of Journalists.

Among the Post's more illustrious journalists of recent times was Duncan Hamilton, whose highly-acclaimed book about Brian Clough (Provided You Don't Kiss Me) was described by TV commentator John Motson as 'one of the best football books I've ever read.' After 20 years on the Post, Hamilton became deputy editor of the Yorkshire Post.

In March 1996 the Post was relaunched as a full-colour tabloid, although the Saturday edition had switched to the smaller paper size as far back as 1982.

The Post was based at offices on Forman Street in the centre of Nottingham until 1998 when the paper relocated to Castle Wharf.

As well as the main newspaper, the Post also publishes a weekly sports paper on a Saturday throughout the football (soccer) season, The Football Post (no longer published) which includes coverage of the two local Football League clubs, Nottingham Forest, and Notts County, as well as coverage of local non-league football, cricket, ice hockey and rugby union. In addition to this, the Post also previously published Forest Fever, a weekly newspaper-style magazine dedicated to Nottingham Forest Football Club. Its weekly in-depth look at events at The City Ground featured interviews with players, former players, management and supporters.

There is also a monthly Bygones paper, which publishes features and stories on the history of Nottingham.

The previous editor of the Post, Graham Glen, retired in August 2006. Current editor is Malcolm Pheby. One of its longest-serving editors in recent times was Barrie Williams, who served for 14 years before becoming editor of the Western Morning News in Plymouth. Following retirement, Williams wrote a book about his 40-year newspaper career (Ink in My Blood ISBN 1-84683-039-7) and a biography of Tommy Lawton, the great England and Notts County centre-forward who fell on hard times in later life and was taken on as a Post columnist. The book is called Get in There, a phrase Lawton often muttered as he headed the ball into the net. In April, 2011, it was shortlisted for a major sports book award.

From October 2011 the printing of the Post moved from Derby to Birmingham.[2]