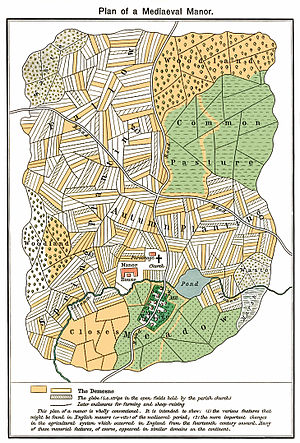 The open field system was the prevalent agricultural system in much of Europe from the Middle Ages to as recently as the 20th century in some places, particularly Russia and Iran. Under this system, each manor or village had several very large fields, farmed in strips by individual families. From the 12th century onwards open fields were gradually replaced by private fields through various reforms in agricultural technology and local government.

Open fields appear to have developed in the medieval period, and were particularly well suited to the very heavy ploughs that were used to cut through the heavy clay soils common in north-western Europe. The ox teams which pulled the ploughs were very expensive, and thus tended to be shared among the families of a village. This form of settlement is sometimes referred to as champion land.

Each village would be surrounded by several large open fields, usually not physically divided from each other, with each field containing a different crop as part of a three-field crop rotation. The fields would be split into sections a furlong (220 yards, about 200 metres) wide, each of which would be subdivided cross-wise into strips covering an area of half an acre (about 0.2 hectares) or less. Under their commoner's rights, each villager was allocated a set number of strips in each field (traditionally about thirty) which they would subsistence-farm. The strips were generally allocated by lot in a public meeting at the start of the year. The individual holdings were widely scattered, so that no single farmer would end up with all the good or bad land. The land was usually managed using ridge and furrow cultivation.

In addition to the three fields, there would be large common meadows (allocated in strips in a similar way), common pasture land or waste where the villagers would graze their livestock throughout the year, woodland for the pigs and for timber, and a communal village green for social events. There was also some private fenced land (paddocks, orchards and gardens), called closes, and often also a park for the use of the owner of the manor for hunting. The ploughed fields and the meadows were also used for livestock grazing outside the growing season.

As populations increased, the land available for each family diminished as more strips were required. From the late Middle Ages onwards, a gradual movement towards consolidation took place as small plots were amalgamated into fewer but larger holdings, with a corresponding increase in the power of the landowners.

Contrary to popular belief, not all areas of England had open-field farming in the medieval period. Parts of south-east England, notably parts of Essex and Kent retained a pre-Roman system of farming in small, square, enclosed fields. In much of west and north-west England, fields were similarly either never open, or enclosed earlier. The primary area of open field management was in the lowland areas of England in a broad swath from Yorkshire and Lincolnshire diagonally across England to the south, taking in parts of Norfolk and Suffolk, Cambridgeshire, large areas of the Midlands, and most of south central England. This area was some of the most populous and profitable; it was also the main grain-growing region (as opposed to pastoral farming).

From as early as the 12th century, some open fields in Britain were being enclosed into individually owned fields. In Great Britain, the process sped up during the 15th and 16th centuries as sheep farming grew more profitable. In the 16th and early 17th centuries, the practice of enclosure (particularly depopulating enclosure) was denounced by the Church and the government, and legislation was drawn up against it. However, the tide of elite opinion began to turn towards support for enclosure, and the rate of enclosure increased in the seventeenth century. This led to a series of government acts addressing individual regions, which were given a common framework in the Inclosure Consolidation Act of 1801.

Throughout the 19th century, the developments in Britain were exported across the world, and the various contributions made upon the working population by warfare and increased mechanization finally finished the open field system off. However, to this day there is still more communally managed open agricultural land in Continental Europe than in England.

The open field system, administered by the mir (the community of the peasants) remained as the main system of peasant land ownership in Russia until the Stolypin reform process that started in 1905.

One place in England where the open field system continues to be used is the village of Laxton in Nottinghamshire. It is thought that its anomalous survival is due to the inability of two early 19th century landowners to agree on how the land was to be enclosed, thus resulting in the perpetuation of the existing system.

The only other surviving medieval open strip field system in England is located in Braunton, North Devon. It is still farmed with due regard to its ancient origins and is conserved by those who recognise its importance although the number of owners has fallen dramatically throughout the years and this has resulted in the amalgamation of some of the strips.

There is also a surviving medieval open strip field system in Wales in the township of Laugharne, which is also the last town in the UK with an intact medieval charter.

Vestiges of an open field system also persist in the Isle of Axholme, North Lincolnshire, around the villages of Haxey, Epworth and Belton, where long strips, of an average size of half an acre, curve to follow the gently sloping ground and are used for growing vegetables or cereal crops. The boundaries are mostly unmarked, although where several strips have been amalgamated a deep furrow is sometimes used to divide them. The ancient village game of Haxey Hood is played in this open landscape.

A similar system to open fields survives in the United Kingdom as allotment gardens. In many towns and cities there are areas of land of one or two acres (up to about one hectare) interspersed between the buildings. These areas are usually owned by local authorities, or by allotment associations. Small patches of the land are allocated at a low rent to local individuals or families for growing food.