The MOWAG Piranha is a family of armoured fighting vehicles designed by the Swiss MOWAG (since April 2010 the name has changed to General Dynamics European Land Systems - Mowag GmbH), corporation.

Five generations of vehicles have been produced, manufactured by MOWAG or under licence by other companies, and variants are in service with military forces throughout the world. 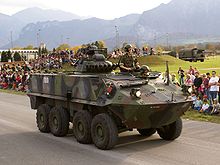 A Romanian MOWAG Piranha IIIC on the Romanian National Day parade on December 1, at the Triumph Arch in Bucharest. 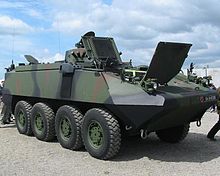 Piranhas are available in 4x4, 6x6, 8x8, and 10x10 wheel versions. There are several variants within these versions, giving different degrees of armour protection and several kinds of turret, for use in a variety of roles. Piranha derivatives have been assigned roles as troop transports, command vehicles, fire support vehicles, tank trainers, and police vehicles.

Piranhas are used by the Swiss Army. Swiss-built Piranha derivatives have been exported to Sweden, Denmark, Ireland, Romania, Spain and Belgium. The Romanian Army and the Belgian Army have selected the Piranha IIIC 8x8. It has decided to convert to all wheeled vehicles, simultaneously removing the current main battle armoured transporter TAB and the Leopard 1 battle tanks, from the inventory. The Piranha is modern and armoured, but lacks the protection, firepower and manoeuvrability of a conventional tracked tank. In total 242 vehicles will be delivered, of which 104 optional.[clarification needed]

Piranha derivatives have been manufactured under licence by General Dynamics (Canada), BAE Systems Land Systems (UK), Komatsu (Japan), Cardoen and FAMAE (Chile), and in the USA. The 8x8 US Army Stryker vehicle is derived from the Canadian LAV III which in turn is based on the Piranha, as is the LAV-25 family in service with the USMC. The Australian Defence Force also has its own modified version of the Piranha I 8x8 known as the ASLAV (Australian Light Armoured Vehicle). The ASLAV is operated by two cavalry regiments (the 2nd Cavalry Regiment and 2nd/14th Light Horse Regiment) and is used in the armoured reconnaissance and armoured personnel carrier roles.

Some variants, like the United States Marine Corps's Light Armored Vehicle-25 (LAV-25) and its derivatives, are equipped with propellers for amphibious use, though their swimming capability is restricted to sheltered waters.

A new Piranha V version, weighing in between 25 to 30 tons, was announced as the provisional winner of the British Army's FRES program on 8 May 2008.[3] However this was withdrawn seven months later and bidding has started again.[citation needed]

General Dynamics European Land Systems launched their new Piranha Class 5 at EUROSATORY 2010 on 15 June and it is reported that the British MoD are showing renewed interest but struggle with budget constraints.[4]