The Model 700 series of firearms are bolt-action rifles manufactured by Remington Arms since 1962.[1][2] All are based on the same centerfire bolt action.[3] They often come with a 3, 4 or 5-round internal magazine depending on caliber, some of which have a floor-plate for quick-unloading, and some of which are "blind," (with no floor-plate). The rifle can also be ordered with a detachable box magazine. The Model 700 is available in many different stock, barrel and caliber configurations. It is a development of the Remington 721 and 722 series of rifles, which had been introduced in 1948.[4][5]

The Remington 700 action is designed for mass production.[6] Despite its cost-effective production methods, it is very strong and reliable, and has a large worldwide following. It is a manually-operated bolt action with 2 forward dual-opposed lugs and a rear safety lug formed by the bolt handle lug sitting in a receiver recess. The bolt face is recessed, fully enclosing the base of the cartridge, The extractor is a C-clip sitting within the bolt face. The ejector is a plunger on the bolt face actuated by a coil spring. The bolt is of 3-piece construction, brazed together (head, body and bolt handle). The receiver is milled from round cross-section steel of highest quality.[4]

The Remington 700 comes in a large number of variants, with different stocks, barrel configurations, metal finishes and calibers. In addition there are 3 lengths of action (not including the Model Seven's lightweight action, which is even shorter than the 'standard' short action). There is the short action for .308-length cartridges, the standard for .30-06 length cartridges and the long action for magnum calibers. To these can be added various magazine configurations; a blind magazine which has no floorplate, a conventional magazine with detachable floorplate and a detachable box magazine. There are standard consumer versions as well as versions designed for military and police use. Some variants come with bipods, slings and other accessories.

Remington produced a 700 ML muzzleloading rifle from 1996 onwards. The EtronX electronic primer ignition system was implemented in the Model 700 EtronX introduced in 2000.[5] 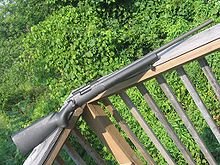 There are two main models of the 700P – the standard 700P with a 26" heavy barrel and the 700P Light Tactical Rifle (LTR) which has a 20" fluted heavy barrel. Both rifles also come (optionally) in a Tactical Weapons System (TWS) package, complete with telescopic sights, a bipod, and carrying case. Both rifles are capable of sub MOA accuracy right out of the box using match quality ammunition and a quality scope.

According to Remington Arms, the Model 700 is the top choice for police and military sharpshooter rifles in the United States.[8] The rifle is also very popular with law-enforcement agencies abroad.

Remington markets the 700 to military forces and civilian law-enforcement agencies under the Remington Law Enforcement and Remington Military banner, with the military/law enforcement 700s being called the Model 700P ("Police"). The 700P series appears to have been influenced by the designs, features, and success of the M24 Sniper Weapon System and the M40 series, with one feature of the Model 700P series being the heavier and thicker barrel for increased accuracy and reduced recoil. The rifle was chambered for .308 Winchester cartridge as well as the .223 Remington, .243 Winchester, 7 mm Remington Magnum, .300 Winchester Magnum, .300 Remington Ultra Magnum, and .338 Lapua Magnum. The 700P has a 26" barrel, an aluminium block bedded in its stock, which is made by HS Precision.

The police version (700P) is also marketed to private citizens and is very popular with shooters and hunters who like the "government issue" appearance as well as the handling and accuracy. Remington also sells the standard, U.S. Army-issue Leupold Mark IV M3 10x40 mm telescopic sight used by the Army's M24 as an optional feature. Remington offers similarly-styled, less expensive versions under the Special Purpose Synthetic (or SPS) name. They are similar in most respects to the 700P but lack the H-S Precision stock. The SPS Varmint has the 26" heavy barrel and the SPS Varmint Tactical has the 20" fluted heavy barrel.

Both the U.S. Army's M24 Sniper Weapon System and U.S. Marine Corps' M40 sniper rifles are built from the Remington Model 700 rifle, in different degrees of modification, the main difference being the custom fitted heavy contour barrel. The M24 uses the long action bolt-face, whereas the M40 uses the short action. The reason for this difference is that the M24 was originally intended to chamber the longer .300 Winchester Magnum round.[9][10]

The United States Army’s Joint Munitions and Lethality Contracting Center has awarded Remington a Firm Fixed Price (FFP) Indefinite Delivery/ Indefinite Quantity (ID/IQ) contract (W15QKN-10-R-0403) for the upgrade of up to 3,600 M24 Sniper Weapon Systems (SWS) currently fielded to the Army pending type classification as the “M24E1”. The major configuration change for this system is the caliber conversion from 7.62mm NATO (.308 Winchester) to .300 Winchester Magnum to provide soldiers with additional precision engagement capability and range. The contract is for a five (5) year period and has guaranteed minimum value of $192K with a potential value of up to $28.2 million.[11] This award follows a full and open competitive evaluation lasting 9 months, which began with the release of the Army’s Request for Proposal (RFP) on 13 January 2010. The program will be executed under the authority of Project Manager Soldier Weapons, Picatinny Arsenal, NJ, and managed by its subordinate unit, Product Manager Individual Weapons. In 2009 the U.S. Army has changed the weapon name from M24E1 to the XM2010 Enhanced Sniper Rifle.[12]

Remington maintains an up to date list of its "Centerfire Rifles by Caliber",[13] which includes current production and discontinued models. The following table (of unknown source or date) is said to provide a comprehensive overview of the available cartridges and barrel lengths in Model 700 firearms.

On 20 October 2010, CNBC televised a program, Remington Under Fire: a CNBC Investigation, reporting that the trigger mechanism used prior to 2007 on the model 700 could fire without the trigger being squeezed. The report stated that Remington has received thousands of customer complaints since the firing mechanism was introduced in the 1940s, and that nearly two dozen deaths and hundreds of injuries had been attributed to inadvertent discharges of 700 series rifles. Through internal Remington documents, the program showed that on multiple occasions, the company considered recalling the product. The inventor of the firing mechanism, Merle "Mike" Walker, now 98 years old, told CNBC he proposed what he called a safer trigger in 1948 while the product was still in the testing stage. Walker said his enhanced design was rejected because of the added cost, 5 1/2 cents per gun.[19] Critics of the documentary countered that every incident featured on the program involving loss of life was the result of firearms mishandling where owners pointed their rifles at other human beings.[20] Remington responded with the website Remington Model 700 Network which gives direct rebuttals to the program, and the context to the incidents the program makes claims apart.[21] Remington dismisses the allegations, pointing out that in every case either trigger mechanisms of the rifles were adjusted or altered beyond recommended specifications,[22] rifles were poorly maintained and left to rust, or the misuser of the rifle admitted to police they might "possibly" have pulled the trigger.[21] Though Remington has since changed to a new, cheaper, trigger mechanism design, the original Walker trigger continues in production to meet the needs of the US military and buyers of custom rifles.[21]