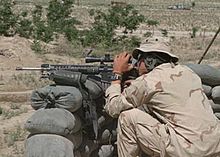 A US Marine Designated Marksman.

A marksman is a person who is skilled in precision, or a sharpshooter shooting,[1] using projectile weapons, such as with a rifle but most commonly with a sniper rifle, to shoot at long range targets. The main difference between a marksman and a normal sniper is that a marksman is usually considered an organic part of a team of soldiers, whereas regular snipers tend to work alone or with other snipers. In the military, marksmen are sometimes attached to an infantry squad where they take accurate long-range shots at valuable targets as needed, thus extending the reach of the squad.[original research?]

Another term for a marksman is a sharpshooter, which was used in the early 19th Century. It is derived from the German word Scharfschütze.[2]

In the Middle Ages, the first use of the term 'marksman' was given to the royal archers, or bowmen, of a palace guard, which was an elite group of troops chosen to guard a royal palace. This was approximately around the 10th century, although records of some 9th century English Kings show the listings of groups of marksmen specifically chosen for their military.

One of the first true appearances of units of sharpshooters was during the American Revolution.[original research?] American rifle companies, armed with the Pennsylvania Long Rifle served as skirmishers for the Continental Army. Because of the accuracy of these riflemen, many British officers removed their insignia to prevent the Americans from targeting them. The most famous unit of riflemen was Morgan's Riflemen.[citation needed]

Another use of units of marksmen was during the Napoleonic Wars in the British Army. While most troops at that time used inaccurate smoothbore muskets, the British "Green Jackets" (named for their distinctive green uniforms) used the famous Baker rifle. Through the combination of a leather wad and tight grooves on the inside of the barrel (rifling), this weapon was far more accurate, though slower to load. These Riflemen were the elite of the British Army, and served at the forefront of any engagement, most often in skirmish formation, scouting out and delaying the enemy.

During the American Civil War, sharpshooters saw limited action, as tacticians sought to avoid the heavy casualties inflicted through normal tactics, which involved close ranks of men at close ranges. The sharpshooters used by both sides in the Civil War were less used as snipers, and more as skirmishers and scouts. These elite troops were well equipped and trained, and placed at the front of any column to first engage the enemy.

Notable sharpshooter units of the Civil War included the 1st and 2nd United States Volunteer Sharpshooter Regiment (USSS), composed of companies provided by numerous (primarily eastern) Union states. The U.S.V.S.S. were organized by Colonel Hiram Berdan, a self-made millionaire who was reputed to be the best rifle marksman in the nation at that time.[citation needed]

There was also an all-Native American company of sharpshooters in the Army of the Potomac. These men, primarily Odawa,Ojibwe and Potawotami from northern Michigan, comprised the members of Company K of the 1st Regiment Michigan Volunteer Sharpshooters.

In the Western Theater were the well known 66th Illinois Veteran Volunteer Infantry Regiment (Western Sharpshooters), originally known as "Birge's Western Sharpshooters" and later the "Western Sharpshooters-14th Missouri Volunteers". The regiment, was raised by MG John C. Fremont at St. Louis' Benton Barracks, as the Western Theater counterpart to Berdan's sharpshooters. Members was recruited from most of the Western states, predominantly Ohio, Michigan, Illinois and Missouri. Competitive induction required candidates to place ten shots in a three inch circle at 200 yards. They were initially armed with half-stock Plains Rifles built and procured by St. Louis custom gunmaker Horace (H.E.) Dimick. These "Dimick Rifles" (as they were known in the unit) were modified for military use by the installation of the Lawrence Patent Sight, and fired a special "swiss-chasseur" minie ball selected by Horice Dimick for its ballistic accuracy. They were the only Federal unit completely armed with "sporting rifles". Beginning in the autumn of 1863 soldiers of the regiment began to reequip themselves with the new 16 shot, lever action Henry Repeating Rifle giving them a significant advantage in firepower over their opponents. Over 250 of the Western Sharpshooters purchased Henrys out of their own pocket, at an average price of forty dollars (over three months pay for a Private). Illinois Governor Richard Yates provided Henrys for some members of the 64th Illinois Volunteer Infantry Regiment or Yates Sharpshooters and other soldiers of the unit appear to have similarly equipped themselves with Henry Rifles in 1864.

Confederate sharpshooters were often less well equipped than Federal counterparts, often using the Enfield Rifled Musket or (the more uncommon) hexagonal bore British Whitworth rifles, rather than breech loading Berdan Sharps rifles. In his memoirs, Louis Leon detailed his service as a sharpshooter in the Fifty-Third North Carolina Regiment during the Civil War. As a sharpshooter, he volunteered as a skirmisher, served on picket duty, and engaged in considerable shooting practice. Of his company's original twelve sharpshooters, only he and one other were still alive after Gettysburg. As related by the regiment's commanding officer, Col. James Morehead, in a rare one-on-one encounter Pvt. Leon killed a Union sharpshooter, whom the Confederates identified as a Native American from Canada.[3]

The terms 'marksman' and 'sharpshooter' are often used interchangeably with the term 'sniper' (as often in history) within paramilitary counter-terrorism teams such as SWAT, since only a select few use long-range sniper rifles while the majority are armed with close quarter combat submachine guns.

In the Australian Army, marksmanship is currently recognized by the award of one of three skill-at-arms badges. The 'Skill at Arms Badge' consists of a representation of crossed .303 Short Magazine Lee Enfield (SMLE) rifles and is awarded for achieving a prescribed standard of shooting skill. This must be repeated within twelve months for the badge to be awarded in perpetuity to the recipient. The 'Sniper's Badge' is similar in design but incorporates the letter 'S' into the design and is awarded to soldiers who qualify on the Army Sniper's Course. The 'Army Top 20 Badge' consists of crossed .303 SMLE rifles upon a laurel wreath and is awarded to the final 20 competitors in the annual Champion Shot for the Army. The winner of this competition is also awarded the Champion Shots Medal. Only one badge may be worn.[4][5]

In the British Armed Forces, "marksman" is traditionally the highest shooting rating and holders may wear a crossed rifles badge on the lower sleeve.[verification needed]

From Army Operational Shooting Policy for the Annual Personal Weapons Test (APWT) Combat Infantryman (CI)
Marksman (Combat Infantryman). To qualify for Marksman all practices are to be completed and the firer must achieve a score of 55 (85%) or more of the total Highest Possible Score (65) for the entire shoot. Soldiers achieving a non-marksman passing score are NOT permitted to re-shoot practices in order to qualify for Marksman. Infantry soldiers who qualify as Marksmen during the Combat Infantryman's Course (CIC) are entitled to retain the award on joining their units. Soldiers who qualify as Marksmen are entitled to wear the Marksman badge for one year before they must requalify.

This sequence[clarification needed] comes from organized, competitive shooting where it was first created.[citation needed] Some civilian shooting organizations still use the same terms for classification purposes. However, the terms are not consistent between the military and civilians.[citation needed]

A "Squad Designated Marksman" or a "Designated Marksman" should not be confused with a regular sniper. United States marksmen rarely operate individually. Snipers are often deployed for specific objectives in teams consisting of snipers and observers. The marksman, however, operates as a regular member within a unit where his skills are called upon whenever the need for accurate shooting arises in the normal course of operations. While snipers are intensively trained to master fieldcraft and camouflage, these skills are not required for marksmen. There are differences in role and training that affect doctrines and equipment. Snipers rely almost exclusively on more accurate but slower-firing bolt-action rifles[citation needed], such as the M24, while a marksman can effectively use a faster-firing, but less accurate semi-automatic rifle[citation needed], such as the M14. A sniper's intensive training, forward placement and surveillance duties make their role more strategic than that of a squad-level marksman. Thus, marksmen are often attached at the squad level while snipers are often attached at higher levels such as battalion (cf.: designated marksman). In short, an "SDM" or "DM" is a sniper who operates with a combat squad, while a regular sniper is deployed to gather information and eliminate specific targets.

The United States has a long tradition of marksmanship going back to its beginnings including the role of common men in its Revolutionary War. There are several organizations which promote civilian marksmanship including the Civilian Marksmanship Program which began just after the turn of the 20th century as a government chartered program and the Division of Civilian Marksmanship. One of the newest and currently the fastest growing marksmanship programs in North America is the Appleseed Project which was developed by the Revolutionary War Veterans Association.