The Remington New Model, was a percussion revolver manufactured by Eliphalet Remington & Sons in .36-(Navy) or .44-(Army) caliber revolver used during the American Civil War. Known as it was used primarily by Union soldiers, and widely favored over the standard issue Colt Army Model 1860. It was expensive and those who could afford it, remarked due its durability and ability to quickly reload by switching to another pre-loaded cylinder. [1]

It saw use in the American West, both in its original percussion configuration and as a metallic cartridge conversion.

The Remington was a single-action, six-shot, percussion revolver produced by E. Remington & Sons, Ilion, N.Y., based on the Fordyce Beals patent of September 14, 1858 (Patent 21,478). The Remington Army revolver was large-framed, in .44 caliber, with an 8 inch barrel length. The Remington Navy revolver was slightly smaller framed than the Army, and in .36 caliber with an 7.375 inch [Beals Navy 7.5 inch] barrel length. There were three progressive models; the Remington-Beals Army & Navy (1860–1862), the 1861 Army & Navy (1862–1863), and the New Model Army & Navy (1863–1875).[2] The three models are nearly identical in size and appearance. Subtle but noticeable differences in hammers, loading levers, and cylinders help identify each model. The 1861 Remington actually transitioned into New Model appearance by late 1862, slowly transforming throughout 1862, due to continual improvement suggestions from the U. S. Ordnance Department.[3][4]

By the time of the Civil War, most percussion revolvers were fired with commercially made combustible cartridges, constructed of a powder envelope (usually paper cartridge) glued to the base of a conical bullet. The treated envelope self-consumed upon firing. To load a combustible, a cartridge was dropped envelope first into each chamber and seated firmly with the loading lever, the process continuing until all six chambers were loaded. After all six chambers were loaded, placing a percussion cap on each of the six nipples at the rear of the cylinder readied the revolver for firing. The six chambers of a revolver cylinder could also be loaded one chamber at a time, by dropping in a powder charge from a flask, followed by seating either a round ball or conical bullet in each chamber, using the loading lever. To help prevent chain firing (also known as "cross-firing") of the black powder charge and to reduce black powder fouling, grease (such as tallow) was often put into each chamber on top of the loaded projectile. Combustible cartridge bullets were already pre-greased with beeswax, so the greasing step was unnecessary. The final loading step was capping as in the combustible cartridge loading method described earlier.

Remington percussion revolvers are very accurate, and capable of considerable power with muzzle velocities in the range of 550 to 1000+ feet-per-second, depending upon the charge loaded by the shooter. Combustible cartridge velocities averaged from 700 to 900 feet per second (270 m/s), depending on powder quality, charge and conical bullet weight. Combustibles were usually loaded with a special high performance sporting grade black powder, using the minimum charge required for a specified impact level, usually determined by pine penetration tests. The special powder and minimal charge reduced black powder fouling, allowing revolvers to be fired as much as possible before cleaning was necessary.[5][6]

In 1868, Remington began offering cartridge conversions of the revolver in .46 Rimfire. Remington paid a royalty fee to Smith & Wesson, owners of the Rollin White patent (#12,648, April 3, 1855) on bored-through revolver cylinders for metallic cartridge use. The Remington Army cartridge-conversions were the first large-caliber cartridge revolvers available, beating even Smith & Wesson's .44 American to market by nearly two years.

Remington percussion revolvers have appeared in notable movie scenes in films such as Pale Rider, Gone with the Wind, and The Good, the Bad and the Ugly, as well as early episodes of Bonanza. Easily identified by octagonal barrel, top strap frame, brass trigger guard and distinctive loading lever web, the streamlined Remington is easy to spot in movie and television scenes. 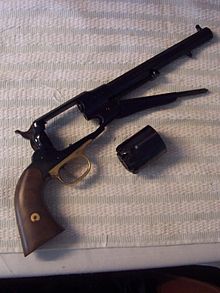 A New Model Army replica. The cylinder has been removed from the frame.

The New Model owes its durability to its innovative “top-strap”, solid frame design, which fully encloses the cylinder. The design is stronger and less wear-prone than the Colt revolvers of the same era. The internal lock-work of the Remington is somewhat simpler in construction. While the Colt employs separate screws for the hand and trigger, those components share the same through-frame screw in the Remington design.

For safety reasons, modern shooters using this technique should not have the percussion caps applied to the replacement cylinder until after it is installed in the revolver, in case it is accidentally dropped. The best solution is to avoid it by using properly fitting caps, grease or lube, nipples in good condition, and perhaps employing “cap guards,” short pieces of tubing that snug down over the sides of the cap and hold it in place, as well as seal it against moisture. Replacing the cap with safer firing pins also help.[7] Securing the cylinder in a pocket or saddlebag is also important, cause a small bump can ignite all the unsecured bullets.

Another innovative feature, (first appearing in late 1862 in the 1861 Model production series) was safety slots milled between chambers on the cylinder. Some 19th century revolver designs lacked such safety features. Early Whitney revolvers, for example, were similar to the Remington, but lacked safety slots between cylinder chambers. It was possible to lower the Whitney hammer between cylinder chambers for safe carry. However, lacking the Remington milled slot, the Whitney cylinder could possibly slip and rotate, allowing the hammer to strike a loaded, capped chamber, causing an accidental discharge. The Remington milled slot positively secured the hammer between chambers for safe carry by preventing accidental cylinder rotation.

A prized possession of the Remington Arms Company is an original New Model Army with ivory grips once carried by William F. "Buffalo Bill" Cody. The historic revolver is on display with Cody's simple handwritten note, "It never failed me". Cody carried the revolver in original percussion form well into the cartridge era, and never converted it to cartridge use.

The Remington-Beals design lives on today in the form of replicas from Italian manufacturers Uberti, Pietta, and Euroarms. The Euroarms and Uberti New Model Army replicas are nearly identical to originals, and most parts will interchange, based on 1959 through 2006 production examples. The Pietta New Model Army has a slightly enlarged grip area for more comfortable use by the larger hands of 21st century users. The Uberti and Pietta replicas are very popular in Cowboy Action Shooting as cartridge conversions or shooting black powder or modern replacements, just as the original Remington cartridge conversions were popular on the actual Western Frontier of the 1860s and 1870s. Several companies market drop-in "conversion" cylinders for both Uberti and Pietta replicas, enabling the firing of low-pressure cartridges without altering the revolver's frame. The cap & ball cylinder can be used interchangeably.

Modern metal conversion of the replica pistol are being produced by changeable cylinders. One of them is R&D Gun Shop that makes a cylinders that shoots .45 Colt cartridges and .38 Special in a replica 1858 Remington revolver. The new cylinder drops right in, replacing the cap and ball cylinder with no gunsmithing required.[8] R&D has also converted replicas to fire smokeless powder safely.[9] Kirst Konverter also produces them in a different cylinder model that has a safety chamber called the Kirst Safety Cylinder. It only has 5 loading chambers but makes it a six shot cylinder because the star is designed to index to six separate positions.[10]

The Remington-Beals design was 150 years old in 2008; replicas remain in use today in numbers far greater than original Remington production, a tribute to a rugged, simple design that remains practical and efficient in the 21st Century.