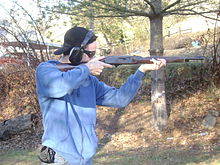 A man fires the Remington Nylon 66.

The auto-loading .22 caliber Remington Nylon 66 rifle was introduced by Remington Arms in 1959, featuring a synthetic stock built from the DuPont material Zytel, a compound similar to Nylon. The largely synthetic construction meant that the Nylon 66 could operate without any added lubricants. This made it very popular in arctic regions, and indeed there have been many reports of indigenous peoples taking large animals, such as moose, with a .22LR fired from a Nylon 66. Some have speculated that the light weight of the gun could potentially cause substandard accuracy in the field, but this does not seem to be a complaint from Nylon 66 shooters.

The Nylon 66 was fitted with leaf sights as well as a grooved receiver that could accommodate a mount for a telescopic sight. It was available in several colors, such as "Mohawk Brown", "Apache Black," and "Seneca Green". The "Seneca Green" version is the rarest, as it was discontinued in 1963.

The Apache version of the Remington Model 66 has a rather bright green stock and was sold by K-Mart. The Seneca Green is a rather dull colored green and, in some lighting conditions, Seneca Green is difficult to distinguish from the more common brown.

The Nylon 66 was also made under license in Brazil by CBC - Companhia Brasileira de Cartuchos (Brazilian Cartridge Company, aka Magtech outside Brazil) from 1962 to 1992 in three finish grades: standard (brown stock), deluxe (black stock with engraved blued receiver), and super deluxe (black stock with nickel plated barrel and receiver). CBC produced 201,210 Nylon 66 rifles. The Zytel was replaced with a similar, but less expensive material called Technyl, in the later Nylon 66 produced in Brazil.