The Rammelsberg is a mountain, 635 m high, on the northern edge of the Harz, south of the town of Goslar in the north German state of Lower Saxony. The mountain is the location of an important mine, the only mine which had been working continuously for over 1,000 years when it finally closed in 1988.[1] Since 1992, the visitors' mine of Rammelsberg has become a UNESCO World heritage site.[1]

According to legend, the mountain was named after a knight called "Ramm". Whilst out hunting the knight, who was a henchman of Emperor Otto the Great, tied his horse to a tree, in order to pursue some deer through almost impassable terrain. His charger impatiently pawed the ground with its hooves whilst waiting for his master to return and so exposed a vein of silver ore.

Unlike the mineral deposits of the Upper Harz, the ore deposits at the Rammelsberg were caused by the escape of hot, metal-bearing, thermal springs on the sea floor in the Devonian period. This formation is referred to as a sedimentary exhalative deposit. At the bottom of the Devonian sea, two large lenses of ore were formed that were later caught up in the folding of rocks during the Carboniferous period and so lie overturned at an angle in the mountain. Ore mining started in the "Old Bed" or "Old Orebody" (Alter Lager), exposed on the surface by erosion, during the Bronze Age.[1] The "New Bed" (Neuer Lager) was only discovered in the 19th century as a result of specific exploration.

The mining history of the Rammelsberg occurred as a continuous process in different phases. Initially the main product was silver ore, then later copper, and finally lead. The mines were exhausted only in the 1980s, and were shut down in 1988. The ore contained an average of 14% of zinc, 6% lead, 2% copper, 1 g/t gold and 140 g/t silver.[2]

The analysis of unsmelted pieces of ore and slag found during archaeological excavations between 1981 and 1985 at Düna (near Osterode) in the South Harz indicates mining activity at the Rammelsberg in the 3rd century AD.[3] Layers of an early settlement dated to about the 3rd or 4th century AD located about 25 miles south of the Rammelsberg contained not only pre-industrial melting equipment but also remains of ore, which could clearly be identified as Rammelsberg ore.

Mining on the Rammelsberg was first mentioned in the records around 968 by the Saxon chronicler, Widukind of Corvey, in his Res gestae saxonicae .

In 1005, attracted by the presence of silver ore Emperor Henry II had an imperial palace or Kaiserpfalz built on the southern slope of the Rammelsberg. The mines remained an imperial estate and were later held in pledge by the Imperial town of Goslar in the period 1360-1460. In 1552 - after armed conflict - Duke Henry V of Brunswick-Lüneburg seized ownership of the mines (under the Riechenberg Treaty). The main ores mined at Rammelsberg were lead-zinc ore, copper ore, sulphur ore, mixed ore (Melierterz), brown spar (Braunerz), barite ore (Grauerz), banding ore (Banderz) and kniest along with the important minerals of galena, chalcopyrite, sphalerite, baryte and vitriols. The chief metals extracted from these ores included silver, lead, copper and zinc, on which the wealth of Goslar was based in the Middle Ages. From the 18th century, gold was also won.

Because the Nazis saw the Rammelsberg with its metal ores as vital to the war effort and the difficulty of mineral dressing the ore had been technically solved (using froth flotation), the mine was greatly expanded as part of the Nazi's Four Year Plan. This led to the construction of the present-day surface installations in 1936/37 under the Rammelsberg project with their hillside processing plant and Rammelsberg shaft. The architects were Fritz Schupp and Martin Kremmer, by whom other important industrial buildings were designed (including the Zollverein in the Ruhr area, now also a UNESCO World Heritage Site).

Water wheel in the mining museum

After more than 1000 years during which almost 30 million tonnes of ore were extracted, the mine was closed by the Preussag company on 30 June 1988 as the mineral deposits had been largely exhausted. A citizens' association argued forcefully against plans to demolish the surface installations and fill in the historic underground mine workings. Consequently the disused mine was developed into a unique museum to preserve its heritage and display the history of the mine and its industrial equipment. In 1992 the museum became a UNESCO world heritage project together with Goslar's Old Town. In 2010 this world heritage site was expanded to include the Upper Harz Water Regale,[4] Walkenried Abbey and the historic Samson Pit. The Rammelsberg Museum and Visitor Mine is an anchor point on the European Route of Industrial Heritage (ERIH).

The historic mine has a number of special attractions including:

In February 2009, the company, Scandinavian Highlands Holding A/S, published the results of geophysical investigations by its subsidiary, Harz Minerals GmbH, according to which hitherto unknown mineral deposits of the size of those at the Rammelsberg may be present, two kilometres west of the Rammelsberg ore deposits.[5] In autumn 2009 several exploratory bores were sunk in the area of the Hessenkopf and Gosetal to a depth of 500–600 metres depth. At the end of January 2010, after a news blackout of several months, the company announced that they would soon be drilling to a depth of 800 metres, where they suspected there would be rich mineral deposits.[6]

The Master Malter's Tower (Maltermeisterturm) is the oldest surviving above-ground mine building on the Rammelsberg and, probably, in Germany as well. It was built around 1500 on a slagheap on the side of the Rammelsberg. To begin with the tower was used to oversee the pits; from 1578 it was used as a bell tower (Anläuteturm).

Since the mid-18th century the master malter (Maltermeister) lived in the tower hence the name. He managed the wood needed for the mine, which was measured in in malters. Hence the name of the tower. 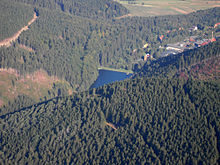 In order to have enough water to drive water wheels during times of drought the Herzberg Pond was created in 1561. Since 1926, this has been used as a woodland swimming pool. Until the closure of the mine, water was used for cooling and the warm water was pumped back into the pond where it heated the swimming basin of the woodland pool.

Low-grade ore dressing on the Bollrich

Due to the German Wirtschaftswunder ("economic miracle") after the Second World War and sharply rising lead and zinc prices in 1950, investigations were undertaken into the deposits of banding ore (Banderz). After successful trials into the processing of this low-grade ore (recoverable metal content of about 25%), the dressing of banding ore was begun in 1953 on the Bollrich above the village of Oker. Once again the mine architect, Fritz Schupp, was responsible for planning the facilities.

The site was linked to the Rammelsberg mine via the pit railway through the Gelenbeek Gallery. The removal of concentrates to the lead smelter at Oker and the Harlingerode zinc works was facilitated by a standard gauge railway line.

In 2008 Goslar's "Old Town" and the Rammelsberg Mine formed the motif for the annually issued 100 Euro gold coins from the series of UNESCO World Heritage Sites.

The Rammelsberg Museum is No. 91 in the system of checkpoints forming the Harzer Wandernadel hiking network.