Apicomplexa life cycle stages have evolved to allow intracellular parasites to survive the wide variety of environments they are exposed to during their complex life cycles.[1] Each stage is typified by a cellular variety with a distinct morphology and biochemistry.

Not all apicomplexa develop all the following cellular varieties and division methods. This presentation is intended as an outline of a hypothetical generalised apicomplexan organism.

Merogony is an asexually reproductive process of apicomplexa. After infecting a host cell, a trophozoite increases in size while repeatedly replicating its nucleus and other organelles.[2] During this process, the organism is known as a meront or schizont. Cytokinesis next subdivides the multinucleated schizont into numerous identical daughter cells called merozoites, which are released into the blood when the host cell ruptures. Organisms whose life cycles rely on this process include Theileria, Babesia,[3] as well as the malaria parasite Plasmodium.[4] Merogony is sometimes referred to as schizogony, though the latter term correctly applies to sporogony and gametogony as well.[5]

Sporogony is a type of sexual or asexual reproduction by multiple fission of a spore or zygote. It is characteristic of a group of parasites called the sporozoans.

Endodyogeny is a process of asexual reproduction, favoured by parasites such as Toxoplasma gondii. It involves an unusual process in which two daughter cells are produced inside a mother cell, which is then consumed by the offspring prior to their separation.[6]

Endopolygeny is the division into several organisms at once by internal budding.[6] 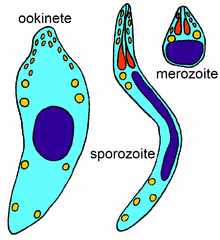 An ookinete, a sporozoite and a merozoite of Plasmodium falciparum.

An ookinete (G. oon, egg + kinetos, motile) is a fertilised zygote capable of moving spontaneously. It penetrates epithelial cells lining the midgut of mosquitos to form a thick-walled structure known as an oocyst under the mosquito's outer gut lining.[7]

A sporozoite (G. sporos, seed + zoon, animal) is the cell form that infects new hosts. In Plasmodium, for instance, the sporozoites are cells that develop in the mosquito's salivary glands, leave the mosquito during a blood meal, and enter the liver where they multiply. Cells infected with sporozoites eventually burst, releasing merozoites into the bloodstream.[8]

A merozoite (G. meros, part [of a series], +zoon, animal) are the result of merogony that takes place within a host cell. In coccidiosis, merozoites form the first phase of the internal life cycle of coccidian. In the case of Plasmodium, merozoites infect red blood cells and then rapidly reproduce asexually. The red blood cell host is destroyed by this process, which releases many new merozoites that go on to find new blood-borne hosts.

A trophozoite (G. trope, nourishment + zoon, animal) is the activated, intracellular feeding stage in the apicomplexan life cycle. After gorging itself on its host, the trophozoite undergoes schizogony and develops into a schizont, later releasing merozoites.

A bradyzoite (G. brady, slow + zoon, animal) is a sessile, slow-growing form of zoonotic microorganisms such as Toxoplasma gondii, among others responsible for parasitic infections. In chronic (latent) toxoplasmosis, bradyzoite microscopically presents as clusters enclosed by an irregular crescent-shaped wall (a pseudocyst), in infected muscle and brain tissues.

A tachyzoite (G. tachy, fast + zoon, animal), contrasting with a bradyzoite, is a form typified by rapid growth and replication. Tachyzoites are motile forms of coccidians that form tissue cysts, such as Toxoplasma and Sarcocystis. Typically infecting cellular vacuoles, tachyzoites divide by endodyogeny and endopolygeny.

An oocyst (G. oon, egg + kystis, bladder) is a hardy, thick-walled spore able to survive for lengthy periods outside a host. The zygote develops within the spore, which acts to protect it during transfer to new hosts. Organisms that create oocysts include Cryptosporidium and Toxoplasma.