Management of schizophrenia depends largely on medications and on psychosocial interventions. No single approach is widely considered effective for all patients, though in the United States and most Western countries, psychiatric medication is often the primary method of treatment. Currently, there is a movement towards utilizing a recovery model that emphasizes hope, empowerment and social inclusion, though this is not yet a mainstream mental health concept .[1]

Criteria for the remission of symptoms were suggested in 2006.[2] Management of symptoms and improving function may be more achievable than a permanent cure[citation needed] .

Antipsychotics have been a mainstay of therapy since the introduction of chlorpromazine in the mid-1950s, which revolutionized treatment[citation needed]. Significant adverse effects have attracted controversy. Older concerns of sedation, tardive dyskinesia and neuroleptic malignant syndrome have been largely replaced with those of drug-related obesity and diabetes.

In many non-Western societies, schizophrenia may only be treated with more informal, community-led methods. The outcome for people diagnosed with schizophrenia in non-Western countries may actually be better than for people in the West.[3] The reasons for this effect are not clear, although cross-cultural studies are being conducted.

The effectiveness of interventions is often assessed using standardized methods, one of the most common being the Positive and Negative Syndrome Scale (PANSS).[4] This instrument only measures the presence of psychiatric symptoms, and does not adequately assess the characteristics of the recovery model which emphasize psychosocial constructs of recovery, such as hope, identity formation, empowerment and social inclusion.[1]

Hospitalization may occur with severe episodes of schizophrenia. This can be voluntary or (if mental health legislation allows it) involuntary (called civil or involuntary commitment). Long-term inpatient stays are now less common due to deinstitutionalization, although still occur.[5] Following (or in lieu of) a hospital admission, support services available can include drop-in centers, visits from members of a community mental health team or Assertive Community Treatment team, supported employment[6] and patient-led support groups.

The mainstay of psychiatric treatment for schizophrenia is antipsychotic medication.[7] These can reduce the "positive" symptoms of psychosis. Most antipsychotics are thought to take around 7–14 days to have their main effect. 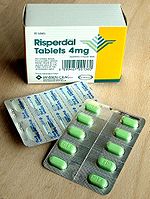 Treatment of schizophrenia changed dramatically in the mid 1950s with the development and introduction of the first antipsychotic chlorpromazine.[8] Others such as haloperidol and trifluoperazine soon followed.

It remains unclear whether the newer antipsychotics reduce the chances of developing neuroleptic malignant syndrome, a rare but serious and potentially fatal neurological disorder most often caused by an adverse reaction to neuroleptic or antipsychotic drugs.[12]

Response of symptoms to medication is variable; "Treatment-resistant schizophrenia" is the failure to respond to 2 or more anti-psychotic medications given in therapeutic doses for 6 weeks or more.[14]Patients in this category may be prescribed clozapine,[15] a medication of superior effectiveness but several potentially lethal side effects including agranulocytosis and myocarditis.[16] Clozapine is the only medication proven to be more effective for persons who do not respond to other types of antipsychotics.[citation needed] It also appears to reduce suicide in people with schizophrenia. As clozapine suppresses the development of bone marrow,in turn reducing white blood cells which can lead to infection, blood tests are taken for the first six months on this medication.[17]

For other patients who are unwilling or unable to take medication regularly, long-acting depot preparations of antipsychotics may be given every two weeks to achieve control. America and Australia are two countries with laws allowing the forced administration of this type of medication on those who refuse but are otherwise stable and living in the community.

Some findings indicate that, in the long term, many schizophrenic individuals function better without antipsychotic medicine.[18] In a 2007 study, only 28% of patients who were not being treated medicinally showed signs of psychotic activity, while 64% of those on antipsychotics had psychotic activity. The authors of the study cautioned that some of this gap may be accounted for by the increased likelihood of symptomatic patients to be placed on antipsychotic medicine, but also noted that some of the difference held even when on-antipsychotic and off-medicine patients of similar prognosis were compared. [19]

Persons diagnosed as having schizophrenia are advised to avoid dietary supplementation of arginine above 30 milligrams per day.[20]

Following an observation that tobacco smoking eases effects of schizophrenia, the nicotine patch has been proposed as a treatment for schizophrenia.[21]

Psychotherapy is also widely recommended, though not widely used in the treatment of schizophrenia, due to reimbursement problems or lack of training.As a result, treatment is often confined to psychiatric medication. [22]

Cognitive behavioral therapy (CBT) is used to target specific symptoms and improve related issues such as self-esteem, social functioning, and insight. Although the results of early trials were inconclusive [23] as the therapy advanced from its initial applications in the mid 1990s, more recent reviews clearly show CBT is an effective treatment for the psychotic symptoms of schizophrenia.[24][25]

Another approach is cognitive remediation therapy, a technique aimed at remediating the neurocognitive deficits sometimes present in schizophrenia. Based on techniques of neuropsychological rehabilitation, early evidence has shown it to be cognitively effective, resulting in the improvement of previous deficits in psychomotor speed, verbal memory, nonverbal memory, and executive function, such improvements being related to measurable changes in brain activation as measured by fMRI.[26]

Metacognitive training: In view of a many empirical findings [27] suggesting deficits of metacognition (thinking about one’s thinking, reflecting upon one’s cognitive process) in patients with schizophrenia, metacognitive training (MCT) [27][28] is increasingly adopted as a complementary treatment approach. MCT aims at sharpening the awareness of patients for a variety of cognitive biases (e.g. jumping to conclusions, attributional biases, over-confidence in errors), which are implicated in the formation and maintenance of schizophrenia positive symptoms (especially delusions),[29] and to ultimately replace these biases with functional cognitive strategies.

The training consists of 8 modules and can be obtained cost-free from the internet in 15 languages.[27][28] Studies confirm the feasibility [30] and lend preliminary support to the efficacy [27][31][32] of the intervention. Recently, an individualized format has been developed which combines the metacognitive approach with methods derived from cognitive-behavioral therapy.[33]

Family Therapy or Education, which addresses the whole family system of an individual with a diagnosis of schizophrenia, has been consistently found to be beneficial, at least if the duration of intervention is longer-term.[34][35][36] Aside from therapy, the impact of schizophrenia on families and the burden on careers has been recognized, with the increasing availability of self-help books on the subject.[37][38] There is also some evidence for benefits from social skills training, although there have also been significant negative findings.[39][40] Some studies have explored the possible benefits of music therapy and other creative therapies.[41][42][43]

The Soteria model is alternative to inpatient hospitalization using full non professional care and a minimal medication approach.[44] Although evidence is limited, a review found the programme equally as effective as treatment with medications but due to the limited evidence did not recommend it as a standard treatment.[45]

Electroconvulsive therapy is not considered a first line treatment but may be prescribed in cases where other treatments have failed. It is more effective where symptoms of catatonia are present,[46] and is recommended for use under NICE guidelines in the UK for catatonia if previously effective, though there is no recommendation for use for schizophrenia otherwise.[47] Psychosurgery has now become a rare procedure and is not a recommended treatment for schizophrenia.[48]

An unconventional approach is the use of omega-3 fatty acids, with one study finding some benefits from their use as a dietary supplement.[49]

A 2003 review of four randomized controlled trials of EPA (an omega-3 fatty acid) vs. placebo as adjunctive treatment for schizophrenia found that two of the trials detected a significant improvement on positive and negative symptoms, and suggested that EPA may be an effective adjunct to antipsychotics.[50] The most recent meta-analysis (2006) failed however to find a significant effect.[51] A 2007 review found that studies of omega-3 fatty acids in schizophrenia, despite being mostly of high quality, have produced inconsistent results and small effect sizes of doubtful clinical significance.[52]