Museum of Vuk and Dositej

Museum of Vuk and Dositej

The Museum of Vuk and Dositej (Serbian: Музеј Вука и Доситеја/Muzej Vuka i Dositeja) is one of the most important memorial museums in Belgrade, the capital of Serbia. Founded in 1949, it depicts the life, work and legacy of Vuk Stefanović Karadžić (1787–1864), the reformer of the Serbian language, and Dositej Obradović (1742–1811), a writer who was the country's first Minister of Education. The museum is a crucial site for understanding the revival of Serbian culture at the time of the First Serbian Uprising against the Ottoman Empire. Since 1979, this institution has been governed by the National Museum of Serbia.[1]

Established in 1949, the Museum of Vuk and Dositej is located in the Ottoman-style building of the former Belgrade Higher School, the first institution in Serbia providing higher education, founded in 1808 by Serbian key figure of the Age of Enlightenment Dositej Obradović during his mandate as Minister of Education; Vuk Stefanović Karadžić was one of the first students of this institution. Subsequently, the Higher School evolved into the University of Belgrade.[2] The building was raised as a residence probably for the Belgrade Defterdar (head of the Ottoman provincial treasury). It is also believed that it used to be home to a harem.[3][4] 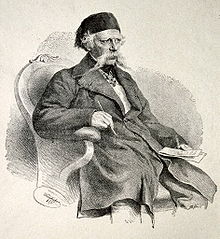 Built in 1739, the structure is the oldest preserved residential building fashioned after a typical Turkish town house in Belgrade. It is an important cultural historic monument of Belgrade and Southeastern Europe. The building consists of two floors and an attic. The museum’s wooden floor construction was repaired in 2010.[5][6][7]

The upper floor of the building is dedicated to Vuk Stefanović Karadžić. The museum has been compiled by his daughter Mina Vukomanović. Exhibits include objects that belonged to the writer (travel bags, glasses, stilt, rod, holster, smoking accessories), various documents transferred from the Serbian Academy of Sciences and Arts (diplomas, business cards, bills, vouchers), portraits, correspondence and a number of books from his personal library, including a copy of John Bowring's English translation of Vuk Karadžić's poetry from 1827.[8][9]

The ground floor is devoted to Dositej Obradović. The museum's library, some of his belongings and a large number of manuscripts are stored there.[10] Exhibits include a copy of the plaque that commemorates Obradović's 1784 residency in London at St. Clement's Court EC4.[11] Unfortunately, very few of his personal items are preseved, because they were destroyed in the 1813 bombing of Belgrade.[12] 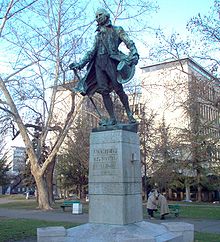 The museum holds thematic exhibits, including presentation of items not presented within the regular exhibition. Some of them are included in the outreach program all over Serbia. The museum occasionally organizes lectures, with the participation of eminent scholars, writers and historians, as well as musical and dramatic artists.

Since 1958, the museum is publishing an annual publication, entitled "Small Case", which is composed of materials and contributions of both Dositej Obradović and Vuk Karadžić, and their followers. This specialized journal was the first publication exclusively engaged on the study of Dositej Obradović and Vuk Karadžić. Besides the "Small Case" journal, the museum is distributing other publications, such as guides, monographs and catalogs of thematic exhibits, published both in Serbian and English.[13]