University of the Philippines Diliman

In 1948, the newly-established Republic of the Philippines sited an area now known as Quezon City as the nation's capital. The next year, the university acquired a 493-hectare area in the Diliman district of the city.[2] The new campus was named University of the Philippines Diliman and was assigned to be the university's seat of administration and main campus. Since its establishment in 1949, UP Diliman has expanded into offering more than 296 graduate, undergraduate and diploma courses,[5] with nine units declared as Centers of Excellence by the Commission on Higher Education as of 2009, currently the highest number recognized by this agency.[6] Between the 70s and 80s, UP Diliman was the site of much student activism.[7] It was during these times that student demonstration and opposition against Marcos' administration became heavy and aggressive. This was one of the precursors to Marcos' declaration of martial law in 1972.[8] 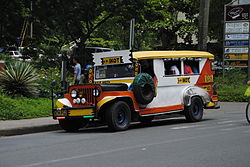 The UP Ikot Jeepney Shuttle Service

UP Diliman has a total land area of 493 hectares.[2] Much of this property is utilized by the university in the form of building infrastructures and research facilities, while the remaining area is forested, reserved for development and residential use, or unoccupied.

The main campus, the science and technology parks located on the eastern and western sides of the university, and the residential(Area 2) and Barangay UP Campus communities stretching from the western side to the northern tip of the university comprise the area most actively used by UP Diliman.

Road map of UP Diliman 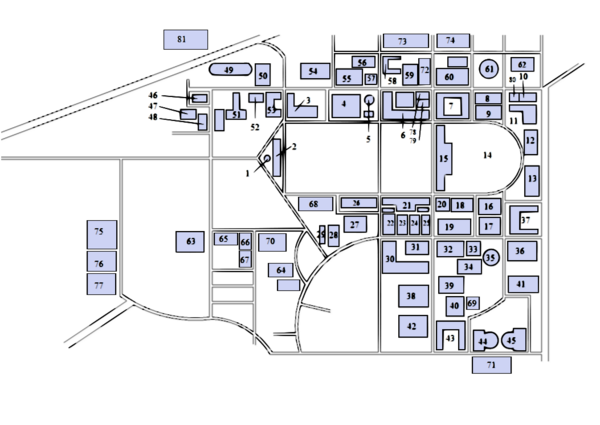 Road map of UP Diliman. Note that the image is not drawn to scale.

The Oblation and Academic Oval

UP Diliman's Oblation statue as viewed from the University Avenue.

Coming from the Commonwealth Avenue in Quezon City, UP Diliman is connected by a road named as University Avenue. The avenue stretches 800 meters where traffic enters the campus or going towards C.P. Garcia St., which connects Commonwealth Avenue to Katipunan Avenue. At the end of University Avenue, the Oblation Plaza of Diliman campus faces the road. Behind it, the main building façade of the campus can be seen, the Quezon Hall.

The Oblation statue (Tagalog: Pahinungod/Oblasyon) is the most iconic figure of the UP System. The statue was originally made by National Artist Guillermo E. Tolentino in 1935 in a collective effort by the students of the UP System.[9] During the 40th anniversary of the University of the Philippines, the Oblation was transferred to Diliman campus as a symbol of transfer of administrative seat. The Oblation was originally naked and made of concrete and stands 3.5 meters in height.[9] To promote morality and censorship, UP President Jorge Bocobo suggested to put fig leaf to cover genitals.[10] In 1950, the Board of Regents ordered the statue to be cast in bronze, which was furnished in Italy and was put into display in 1958.[11]

Several replicas of Tolentino's Oblation statue were created during the creation of new UP campuses, some were made by the National Artist Napoleon Abueva. UP Diliman's Oblation statue located in the Oblation Plaza is also a concrete-made replica of Tolentino's. The original statue is now put on display on the third floor of the university's Main Library.[10]

The main and largest road in the university is the Academic Oval, sometimes known as Acad Oval. This road is composed of two joining avenues, the Roxas and Osmeña Avenues. Having a total circumference of about 2.2 kilometers, the oval connects the rest of the colleges of the university from the main University Avenue. The avenue had its name from several colleges around the oval, namely College of Mass Communication, College of Music, College of Engineering, College of Law, School of Economics, College of Business Administration, College of Education, College of Social Sciences and Philosophy and School of Library and Information Studies. The oval also covers Quezon Hall, the UP Theater, National Engineering Center, Student Activity Center/Vinzons Hall, Center for International Studies and Jorge B. Vargas Museum.[12] Additionally, the Academic Oval is planted with over 500 acacia and fire trees.[12][13]

During the centennial celebration of UP System, UP President Emerlinda Roman rehabilitated the inner circle of the Academic Oval. The transformation included the paving of the inner Oval and creation of commemorative tiles around the walkway for an exchange of price. The efforts are collected and distributed to form the UP Diliman Faculty Development Fund.[14] On March 2008, however, the Academic Oval was turned into one-way in order to lessen traffic volume entering the university. According to Vice Chancellor for Community Affairs Cynthia Grace Gregorio, this policy also promotes to lower air pollution by creating biking lanes on the inner side of the circle.[15] 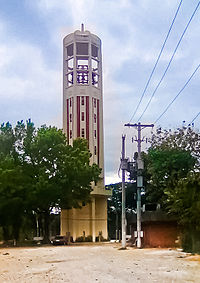 The UP Carillon Tower as seen from Magsaysay Avenue near the UP Film Institute.

The only carillon tower in the Philippines and in Southeast Asia that is manually played by a clavier or a wooden keyboard, the UP Carillon towers about 130 feet tall.[16] The UP Carillon was originally constructed in 1940 by National Artist Juan Nakpil, Conservatory of Music director Ramon Tapales and UP President Bienvenido Gonzales with an initial idea of building a concrete structure that may tower the grounds of the university.[17] Several years later, on 1 August 1952, the tower was finished and dedicated as the UP Carillon. Forty-eight bells with four octaves were installed by the Dutch carilloneeur Adrian Antonisse, with the efforts laid by the UP Alumni Association.[17] These bells were forged by Van Bergen Co. in Netherlands and the largest of the them weighs five tons, where the total cost of construction summed up to PhP 200,000.[18]

Apart from playing the UP's anthem UP Naming Mahal (UP Beloved), the Carillon tuned many music such as the Magtanim ay Di Biro (Planting Rice, a Filipino folk song) and The Beatles sounds.[18] One of the most important tunings of the Carillon was when it played the socialist anthem The Internationale at the 1971 Diliman Commune.[19][20] During this time, UP students declared the university as a republic and as a separate entity from the Philippines.[21]

Due to age and rust, the Carillon ceased to play in 1981. In 1988, the last symphonies of UP Naming Mahal and Push On UP! (UP Diliman's athletic cheer) from the tower was played during the December's Lantern Parade. Since then, the Carillon was never tuned.[16] But as late as 2001, students say that they can hear the rhymes of London Bridge Is Falling Down and Sing a Song of Six Pence despite that it was closed to prevent further mishaps.[16]

In 2005, through the collective efforts of UP Alumni Association and various private donors, the UP Carillon Restoration Project of the UP Centennial Commission launched a fund-raising program to collect PhP 20 million to restore the Carillon, as a projection of using the tower again in the coming 100th year of the University of the Philippines.[22] After two years, the Project was able to collect PhP 14 million which will be used to cleanup and repair the tower itself and to replace the bells.[23]

In 2007, the Carillon was formally reintroduced to the public after two years of restoration. The original 48 bells were put into archives and are now replaced by 36 bells bought from Dutch company Petit and Fritsen for PhP 12 million whereas the construction engineers were provided by the Royal Bell Philippines. According to project engineer Matthew Bergers, each bell was made from 80% bronze and 20% combination of zinc, magnesium and phosphorus. At the same time, the largest of these bells weighs 635 kilograms and the smallest weighs 14 kilograms.[16] The original wood claviers were replaced by heavy duty oakwood while all bells are designed to hold refurbished steel pipes.[23] Another project engineer Eduardo Otacan also said that the new bells will have 3 octaves and they can be programmed using computers attached to the clavier.[16]

At the same time, a small amphitheater named Carillon Plaza was constructed at the base of the tower. After about two decades of silence, the UP Carillon was heard again during the Lantern Parade of 2007.[16] 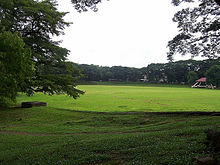 The Sunken Garden in UP Diliman.

The Gen. Antonio Luna Parade Grounds, or commonly known as the Sunken Garden, is a 5-hectare natural depression found on the eastern side of the campus and at the end of the Academic Oval circle. Sunken Garden is enclosed by the UP Diliman Main Library (also houses the School of Library and Information Studies), College of Social Sciences and Philosophy's Department of Psychology, College of Education, Student Activity Center/Vinzons Hall, College of Business Administration, School of Economics and College of Law. The Grounds was the original property of the UP-ROTC when Diliman campus was founded in 1949.[24]

Gen. Antonio Luna Parade Grounds acquired its name Sunken Garden due to its basin-shaped low-level formation that has the deepest point of 65 meters above sea level (contrary to university's height of over hundreds of meters above sea level).[25] The Sunken Garden is usually the venue for sports tournament like frisbee, soccer, and volleyball clinics as well as the annual UP Fair. Sometimes, ROTC trainings are done here by the Department of Military Science and Tactics.[24]

The Sunken Garden actually sinks by about two inches every year. There are two possible reasons of this sinking: first, it is because of underground trenches that mingle with the campus' sewer system. These trenches branch from the rear side of NIGS building, Sampaguita Residence Hall, the UP Integrated School, down to the National Institute of Physics, until near the former Narra Residence Hall. These trenches then connects to the so-called Marikina Fault Line, an active geologic structure that runs across the east of Metro Manila.[26] Another theory is that the depression was due to the emptying of former streams in the Sunken Garden that were prominent in the 1950s. These streams formerly run from the Katipunan Avenue, going to the garden itself and leaves the campus for the Commonwealth Avenue.[25]

The academic arms of the university are called colleges, institutes, or schools. A number of colleges and schools offer a variety of undergraduate, graduate, and diploma programs, while some offer programs only within a specific field. Most institutes offer no degrees, but provide research facilities for academic development.

Some of UP Diliman's academic arms assume the title of "Institute" (such as the Asian Institute of Tourism or the Institute of Islamic Studies) and function as their own units, with their own departments. Some institutes are within colleges (such as the Institute of Civil Engineering within the College of Engineering). Some of UP Diliman's academic arms also assume the title of "School" (such as the School of Economics), which might function independently and have their own departments or which may operate as a unit within a particular college.

UP Diliman's institutes are headed by institute directors, who assume the duties assigned by the chancellor. Each director has a tenure of three years, which may be extended for up to two terms upon the reappointment of the chancellor. A director cannot not be an academic head of any department or division under his institute. Each college or school is composed of clusters of institutes or departments.

The university's departments are headed by department chairs, who assume the duties assigned by the dean and the chancellor. Each chair is appointed by the chancellor, as recommended by the dean or institute director, and has a tenure of three years, which may be extended for up to two terms upon reappointment.[33]

UP Diliman is composed of 26 colleges, schools, and institutes. Officially, these are called degree-granting units.[35] The oldest of these colleges is the College of Fine Arts, established in 1908 and originally located in Manila.[36] On the other hand, the first college to operate on the Diliman campus is the Conservatory of Music (then College of Music) in 1949.

In addition, the University has units that do not grant degrees: