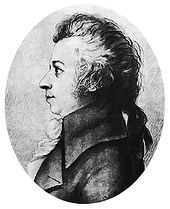 A 1789 portrait of Mozart in silverpoint by Doris Stock

The composer Wolfgang Amadeus Mozart died at 1:00 am on 5 December 1791 at the age of 35, following a short illness.

Mozart experienced issues with his health throughout his life, suffering from smallpox, tonsillitis, bronchitis, pneumonia, typhoid fever, rheumatism and gum disease.[1] His final illness began when he visited Prague to supervise the performance of his new opera La clemenza di Tito in 1791. The visit was fairly successful from a professional standpoint,[2] however, while in Prague Mozart began to feel ill. Early Mozart biographer Franz Niemetschek wrote, "...he was pale and expression was sad, although his good humour was often shown in merry jest with his friends."[3]

Following his return to Vienna, Mozart's condition gradually worsened.[4] For a while, he was still able to work and completed his Clarinet Concerto, worked toward the completion of the Requiem, and conducted the premiere performance of The Magic Flute on 30 September. Still, he became increasingly alarmed and despondent about his health. A famous anecdote from his wife, Constanze, is related in Niemetschek's early biography:

On his return to Vienna, his indisposition increased visibly and made him gloomily depressed. His wife was truly distressed over this. One day when she was driving in the Prater with him, to give him a little distraction and amusement, and they were sitting by themselves, Mozart began to speak of death, and declared that he was writing the Requiem for himself. Tears came to the eyes of the sensitive man: 'I feel definitely,' he continued, 'that I will not last much longer; I am sure I have been poisoned. I cannot rid myself of this idea.'

Constanze attempted to cheer her husband by persuading him to give up work on the Requiem for a while, encouraging him instead to complete the "Freimaurerkantate", K. 623, composed to celebrate the opening of a new Masonic temple for Mozart's own lodge.[5] The strategy worked for a time – the cantata was completed and successfully premiered 18 November[6]. He told Constanze he felt "elated" over the premiere.[7] Mozart is reported to have stated, "Yes I see I was ill to have had such an absurd idea of having taken poison, give me back the Requiem and I will go on with it."

Even so, Mozart's worst symptoms of illness soon returned, together with the strong feeling that he was being poisoned. He became bedridden on 20 November, suffering from swelling, pain and vomiting.[citation needed]

The details of Mozart's death are described by his early biographer – and Constanze's future husband – Georg Nikolaus von Nissen; Nissen took many of his details from an account provided him by Constanze's sister, Sophie Weber.[8] He wrote, "[the illness] began with swelling in the hands and feet, which were almost completely immobilized, followed later by sudden vomiting. ... Until two hours before his passing he remained completely conscious."[9] His body swelled up so much he could no longer sit up in bed, or even move on his own.[10]

While dying, Mozart was comforted by members of his wife's family. His mother-in-law Cäcilia Weber and his sister-in-law made him a bed jacket "which he could put on frontways, since on account of his swollen condition he was unable to turn in bed."[11]

Wolfgang Amadeus Mozart died at 1:00 in the morning on 5 December, 1791. Sophie, his wife's sister, recalled, "I cannot possibly describe the boundless misery of his faithful wife as she threw herself on her knees and implored succour from the Almighty for His aid. She could not tear herself away from him, beg her as I did."[12]

The funeral arrangements were made by Mozart's friend and patron Baron Gottfried van Swieten. Describing his funeral, the Grove Dictionary states, "Mozart was buried in a common grave, in accordance with contemporary Viennese custom, at the St. Marx Cemetery outside the city on 7 December." Jahn (1856) wrote that Salieri, Süssmayr, van Swieten and two other musicians were present.[13] The tale of a storm and snow is false; the day was calm and mild."[14]

Following he husband's death, Constanze recovered from her despair and addressed the task of providing financial security for her family; the Mozart's had two young children, and Mozart had died with outstanding debts. She successfully appealed to the Emperor (11 December 1791) for a widow's pension due to her as a result of Mozart's service to the Emperor as a part-time chamber composer. Additionally, she organized a series of concerts of Mozart's music and the publication of many of her husband's works. As a result, Constanze became financially secure over time.[15]

Soon after the composer's death a Mozart biography was started by Friedrich Schlichtegroll wrote an early account based on information from Mozart's sister, Nannerl. Working with Constanze, Franz Niemetschek wrote a biography as well. Much later, Constanze assisted her second husband, Georg Nikolaus von Nissen in a more detailed biography published in 1826.

Mozart's musical reputation rose following his death; Solomon describes an "unprecedented wave of enthusiasm"[15] for his work, and a number of publishers issued editions of his compositions.

Individuals present at the time of Mozart's death eventually committed their memories to writing, either on their own or through interviews by others. The stories they told are not entirely mutually compatible, which may be due in part to some of them not being recorded until the 1820s, when the witnesses' memories might have faded.[citation needed]

Benedikt Schack, Mozart's close friend for whom he wrote the role of Tamino in The Magic Flute, told an interviewer that on the last day of Mozart's life, he participated in a rehearsal of the Requiem in progress: Schack's questionable account appeared in an obituary for Schack which was published in the 25 July 1827 issue of Allgemeine musikalische Zeitung:

On the very eve of his death, [Mozart] had the score of the Requiem brought to his bed, and himself (it was two o'clock in the afternoon) sang the alto part; Schack, the family friend, sang the soprano line, as he had always previously done, Hofer, Mozart's brother-in-law, took the tenor, Gerl, later a bass singer at the Mannheim Theater, the bass. They were at the first bars of the Lacrimosa when Mozart began to weep bitterly, laid the score on one side, and eleven hours later, at one o'clock in the morning (of 5 December 1791, as is well known), departed this life.[16]

On the day of his death he asked for the score to be brought to his bedside. 'Did I not say before, that I was writing this Requiem for myself?' After saying this, he looked yet again with tears in his eyes through the whole work.[17]

The widely repeated claim that, on his deathbed, Mozart dictated passages of the Requiem to his pupil Süssmayr is strongly discounted by Solomon, who notes that the earliest reference for this claim dates to 1856. Sophie Weber did claim to recall, however, that Mozart gave instructions to Süssmayr.[18]

An 1840 letter from the composer Ignaz von Seyfried states that on his last night, Mozart was mentally occupied with currently running opera The Magic Flute. Mozart is said to have whispered the following to Constanze in reference to her sister Josepha Hofer, the coloratura soprano who premiered the role of the Queen of the Night:

Solomon, while noting that Mozart's biographers often left out the "crueler memories" surrounding his death,[18], stated, "Constanze Mozart told Nissen that just before the end Mozart asked her what [his physician] Dr. Closset had said. When she answered with a soothing lie, he said, 'It isn't true,' and he was very distressed: 'I shall die, now when I am able to take care of you and the children.[20] Ah, now I will leave you unprovided for.' And as he spoke these words, 'suddenly he vomited —it gushed out of him in an arc— it was brown, and he was dead.'"[18]

Mozart's older, seven year-old son Karl, was present at his father's death and later wrote, "Particularly remarkable is in my opinion that fact that a few days before he died, his whole body became so swollen that the patient was unable to make the smallest movement, moreover, there was stench, which reflected an internal disintegration which, after death, increased to the extent that an autopsy was impossible."[18]

Because forensic medicine was in a primitive state during in Mozart's day, it was impossible at the time to determine what specifically had caused the composer's death. In the parish register, the entry concerning Mozart's death states he died of "severe miliary fever"[21] – "miliary" referring to the appearance of millet-sized bumps on the skin, but not naming the actual disease.

A later theorizing rumor addressing the cause of Mozart's death was that he was poisoned by his colleague Antonio Salieri. These rumours, however, were not proven to be true as the signs of illness Mozart displayed did not indicate poisoning.[22] Despite denying the rumors and allegations, Salieri was greatly affected by the accusations he contributed to Mozart's death and contributed to his nervous breakdowns in later life.[23]

Some ascribe Mozart's death to malpractice on the part of his physician, Dr. Closset. Sophie Weber, in her 1825 account, makes the implication. Borowitz summarizes:

When Mozart appeared to be sinking, one of his doctors, Dr. Nikolaus Closset, was sent for and finally located at the theater. However, according to Sophie's account, that drama-lover "had to wait till the piece was over." When he arrived, he ordered cold compresses put on Mozart's feverish brow, but these "provided such a shock that he did not regain consciousness again before he died."[8]

A suggestion is that Mozart died as a result of his hypochondria and his predilection to taking patent medicines containing antimony. In his final days, this was compounded by further prescriptions of antimony to relieve the fever he clearly suffered.[24]

A panel of experts concluded in February 2000 that Mozart died of natural causes; physicians at the University of Maryland, Baltimore have concluded Mozart died from rheumatic fever. Among the physicians was Mozart scholar Neal Zaslaw, who stated that while rheumatic fever was the most likely diagnosis, it is not be possible to confirm the illness as the indisputable cause of death. He further stated that he believes it is highly unlikely Mozart died of unnatural causes.[10]

In 2009, British, Viennese and Dutch researchers performed epidemiological research combined with a study of other deaths in Vienna at the time of Mozart's death. They concluded that Mozart may have died of a streptococcal infection leading to an acute nephritic syndrome caused by poststreptococcal glomerulonephritis. This disease was also called "Wassersucht" in Austria.[25]

In a journal article dated 1908, it was suggested that Vitamin D deficiency could have played a role in Mozart's underlying medical conditions leading to his death.[26]

A 1994 neurology article in PubMed suggests Mozart died of a subdural hematoma. A skull believed to the Mozart's was saved by the successor of the gravedigger who had supervised Mozart's burial, and later passed on to anatomist Josef Hyrtl, the municipality of Salzburg, and the Mozarteum museum (Salzburg). Forensic reconstruction of soft tissues related to the skull reveals substantial concordance with Mozart's portraits. Examination of the skull suggested a premature closure of the metopic suture, which has been suggested on the basis of his physiognomy. A left temporal fracture and concomitant erosions raise the question of a chronic subdural hematoma, which would be consistent with several falls in 1789 and 1790 and could have caused the weakness, headaches, and fainting Mozart experienced in 1790 and 1791. Additionally, aggressive bloodletting used to treat suspected rheumatic fever could have decompensated such a lesion, leading to his death.[27]