Reproduction of the original manuscript of Mozart's canon "Difficile Lectu". The words "lectu mihi mars" were intended to be heard as "Leck du mich im Arsch", for which a relatively polite English rendering is "kiss my arse".

Wolfgang Amadeus Mozart displayed scatological humor in his letters and a few recreational compositions. This material has long been a puzzle for Mozart scholarship. One view held by scholars deals with the scatology by seeking an understanding of the role of it in Mozart's family, his society and his times, while another view holds that such humor was the result of an "impressive list"[1] of psychiatric conditions from which Mozart is claimed to have suffered. 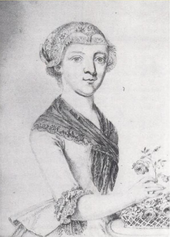 Self portrait in pencil of Maria Anna Thekla Mozart, from 1777 or 1778

A letter of 5 November 1777 to Mozart's cousin Maria Anna Thekla Mozart is an example of Mozart's use of scatology. The German original[2] is in rhymed verse.

Well, I wish you good night
But first shit into your bed and make it burst.
Sleep soundly, my love
Into your mouth your arse you'll shove.[3]

This would be translated into English as "lick me in the arse/ass,[4] quickly, quickly!" "Leck mich im Arsch" is a standard vulgarism in German;[5] its closest English counterpart is "Kiss my arse/ass."

The passage of time has created an almost unbridgeable gulf between ourselves and Mozart's time, forcing us to misread his scatological letters even more drastically than his other letters. Very simply, these letters embarrass us, and we have tried to suppress them, trivialize them, or explain them out of the epistolary canon with pathological excuses.[6]

For example, when Margaret Thatcher was apprised of Mozart's scatology during a visit to the theater to see Peter Schaffer's famous play Amadeus, director Peter Hall relates: "She was not pleased. In her best headmistress style, she gave me a severe wigging for putting on a play that depicted Mozart as a scatological imp with a love of four-letter words. It was inconceivable, she said, that a man who wrote such exquisite and elegant music could be so foul mouthed". I said that Mozart's letters proved he was just that: he had an extraordinarily infantile sense of humour ... "I don't think you heard what I said," replied the Prime Minister. "He couldn't have been like that." I offered (and sent) a copy of Mozart’s letters to Number Ten the next day; I was even thanked by the appropriate Private Secretary. But it was useless: the Prime Minster said I was wrong, so wrong I was." Source: Hall's preface to Amadeus (Schaffer 1981).

Benjamin Simkin, an endocrinologist,[7] estimates that 39 of Mozart's letters include scatological passages. Almost all of these are directed to Mozart's own family, specifically his father Leopold, his mother Anna Maria, his sister Nannerl, and his cousin Maria Anna Thekla Mozart. According to Simkin, Leopold, Anna Maria, and Nannerl also included scatological humor in their own letters.[8] Thus, Anna Maria wrote to her husband (26 September 1777; original is in rhyme):

Addio, ben mio. Keep well, my love.
Into your mouth your arse you'll shove.
I wish you good night, my dear,
But first shit in your bed and make it burst.[9]

Even the relatively straight-laced Leopold used a scatological expression in one letter.[10]

Several of Mozart's scatological letters were written to his cousin (and probable love interest, according to Solomon)[11] Maria Anna Thekla Mozart; these are often called the "Bäsle letters", after the German word Bäsle, a diminutive form meaning "little cousin". In these letters, written after Mozart had spent a pleasant two weeks with his cousin in her native Augsburg,[12] the scatology is combined with extravagant word play and sexual references.[citation needed] Robert Spaethling's rendered translation of part of a letter Mozart sent from Mannheim November 5, 1777:

I have received reprieved your highly esteemed writing biting, and I have noted doted thy my uncle garfuncle, my aunt slant, and you too, are all well mell. We, too thank god, are in good fettle kettle ... You write further, indeed you let it all out, you expose yourself, you let yourself be heard, you give me notice, you declare yourself, you indicate to me, you bring me the news, you announce unto me, you state in broad daylight, you demand, you desire, you wish, you want, you like, you command that I, too, should could send you my Portrait. Eh bien, I shall mail fail it for sure. Oui, by the love of my skin, I shit on your nose, so it runs down your chin...[13]

One of the letters Mozart wrote to his father while visiting Augsburg reports an encounter Mozart and his cousin had with a priest named Father Emilian:

[He was] an arrogant ass and a simple-minded little wit of his profession ... finally when he was a little drunk, which happened soon, he started on about music. He sang a canon, and said: I have never in my life heard anything more beautiful ... He started. I took the third voice, but I slipped in an entirely different text: 'P[ater] E: o du schwanz, leck mich im arsch' ["Father Emilian, oh you prick, lick me in the ass"]. Sotto voce, to my cousin. Then we laughed together for another half hour.[14]

Mozart's scatological music was recreational and shared among friends. All of it takes the form of canons (rounds), in which each voice enters with the same words and music following a delay after the previous voice. Based on the testimony of Gottfried Weber[15] it appears this music was sung in social gatherings. None of it was published in Mozart's lifetime.[citation needed]

Reactions of family and friends

Both the letters and the music were written on repeated occasions, suggesting that the recipients probably were not offended by them.[citation needed] There appears to be nothing in the correspondence requesting Mozart to stop his scatologizing.[citation needed][original research?]

On the other hand, it seems to have been recognized that things said or sung within the family or among friends might be unsuitable for public consumption.[citation needed][original research?] In 1798, Constanze sent her late husband's Bäsle letters to the publishers Breitkopf & Härtel, who at the time were gathering material in hopes of preparing a Mozart biography.[16] In the accompanying letter she wrote "Although in dubious taste, the letters to his cousin are full of wit and deserve mentioning, although they cannot of course be published in their entirety."[17]

In the 18th century 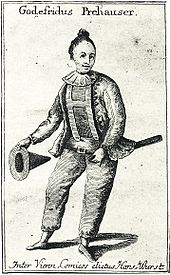 Schroeder (1999) suggests that in the 18th century it was far more public and "mainstream". The German-language popular theater of Mozart's time was influenced by the Italian commedia dell' arte and emphasized the stock character of Hanswurst, a coarse and robust character who would entertain his audience by pretending to eat large and unlikely objects (for instance, a whole calf), then defecating them.[18]

Schroeder suggests a political underlay to the scatology in popular theater: its viewers lived under a system of hereditary aristocracy that excluded them from political participation. The vulgarity of scatological popular theater was a counterpoint to the refined culture imposed from above.[19] One of Mozart's own letters describes aristrocrats in scatological terms; he identified the aristocrats present at a concert in Augsburg (1777) as "the Duchess Smackarse, the Countess Pleasurepisser, the Princess Stinkmess, and the two Princes Potbelly von Pigtail".[20]

The folklorist and cultural anthropologist Alan Dundes suggested that interest in or tolerance for scatalogical matters is a specific trait of German national culture, one which is retained to this day:[21]

In German folklore, one finds an inordinate number of texts concerned with anality. Scheisse (shit), Dreck (dirt), Mist (manure), Arsch (ass), and other locutions are commonplace. Folksongs, folktales, proverbs, folk speech—all attest to the Germans' longstanding special interest in this area of human activity. I am not claiming that other peoples of the world do not express a healthy concern for this area, but rather that the Germans appear to be preoccupied with such themes. It is thus not so much a matter of difference as it is of degree.[22]

Some of the phrases used by Mozart in his scatological material were not original with him but were part of the folklore and culture of his day: Mieder (2003) describes the Bäsle letters as involving "Mozart's intentional play with what is for the most part preformulated folk speech."[24] An example given by Robert Spaethling is the folkloric origin of a phrase seen above, "Gute Nacht, scheiss ins Bett dass' Kracht," said by Spaethling to be a "children's rhyme that is still current in south German language areas today."[25] Likewise, when Mozart sang to Aloysia Weber the words "Leck mich das Mensch im Arsch, das mich nicht will" ("The one who doesn't want me can lick my ass") on the occasion of being romantically rejected by her, he was evidently singing an existing folk tune, not a song of his own invention.[26]

An early 20th century observer who suspected that Mozart's scatological materials could be interpreted in terms of psychological pathologies was the Austrian writer Stefan Zweig, who amassed a large collection of musical manuscripts. His collection included the Bäsle letters (at the time, unpublished) as well as the autographs of Mozart's scatological canons Difficile lectu and O du eselhafter Peierl.[27] Zweig sent copies of the Bäsle letters to the celebrated psychiatrist Sigmund Freud with the following suggestion:

Some authors in the 1990s interpreted the material as evidence that Mozart had Tourette syndrome (TS).[30] Simkin catalogued the scatological letters and compared their frequencies with similar vulgarisms from other members of Mozart's family—they are far more frequent. The scatological materials were combined by Simkin with biographical accounts from Mozart's own time that suggested that Mozart suffered from the tics characteristic of Tourette syndrome.[31] His claim was picked up by newspapers worldwide, causing an international sensation, and internet websites have fueled the speculation.[32]

While often discussed, the Mozart/Tourette hypothesis has failed to sway mainstream opinion on this issue. Indeed, Kammer (2007) states that the work proposing the hypothesis has been "promptly and harshly" criticized.[1] The critical commentary asserts both medical misdiagnosis and errors of Mozart scholarship.[33] Kammer concluded that "Tourette’s syndrome is an inventive but implausible diagnosis in the medical history of Mozart". Evidence of motor tics was found lacking and the notion that involuntary vocal tics are transferred to the written form was labeled "problematic".[1] Neurologist and author Oliver Sacks published an editorial disputing Simkin's claim,[34] and the Tourette Syndrome Association pointed out the speculative nature of this information.[32] No Tourette's syndrome expert or organization has voiced concurrence that there is credible evidence to conclude that Mozart had Tourette's.[35] One TS specialist stated that, "although some web sites list Mozart as an individual who had Tourette's and/or OCD, it's not clear from the descriptions of his behavior that he actually had either."[36]

The canons were first published after Mozart's death with bowdlerized lyrics;[citation needed] for instance "Leck mir den Arsch fein rein" ("Lick me in the arse nice and clean") became "Nichts labt mich mehr als Wein" ("Nothing refreshes me more than wine"). In some cases, only the first line of the original scatological lyrics is preserved. The following list is ordered by Köchel catalog number. Voices and conjectured dates are from Zaslaw and Cowdery (1990:101–105); and links marked "score" lead to the online edition of the Neue Mozart Ausgabe.

The following articles have advanced the theory that Mozart had Tourette syndrome:

The following articles direct criticism at the hypothesis: