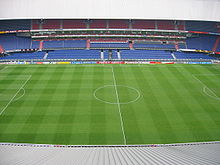 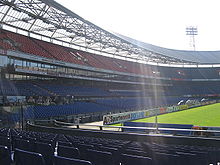 Another view inside the stadium. 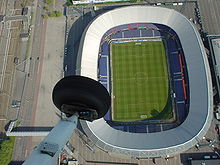 De Kuip from above

The Feijenoord Stadion, better known by its nickname De Kuip (Dutch pronunciation: [də ˈkœyp]) (the Tub), is a stadium in Rotterdam, Netherlands that was completed in 1937. The name is derived from the area "Feijenoord" in Rotterdam, and from the club with the same name (although the club's name was internationalised to Feyenoord in 1973).

It is the home stadium of football club Feyenoord, one of the traditional top teams in the Netherlands. It has also long been one of the home grounds of the Dutch national team, having hosted over 150 international matches, with the first one being a match against Belgium on 2 May 1937. Also, a record ten European finals have taken place in the Feijenoord stadium. The last one was the 2002 UEFA Cup Final in which Feyenoord, coincidentally playing a home match, defeated Borussia Dortmund 3–2.

In 2000, the Feijenoord stadium hosted the final of Euro 2000, played in the Netherlands and Belgium, where France defeated Italy 2–1 in extra time.[1]

Leen van Zandvliet, Feyenoord's president in the 1930s, came up with the idea of building an entirely new stadium, unlike any other on the continent, with two free hanging tiers and no obstacles blocking the view. The great examples at that time were Highbury, where the West and East stands had been recently built as a double deck, and Yankee Stadium in New York City. Johannes Brinkman and Leendert van der Vlugt, the famous designers of the van Nelle factories in Rotterdam were asked to design a stadium out of glass, concrete and steel, cheap materials at that time. They came up with a design that is modern even in this era. In fact, "de Kuip" acted as an example for many of the greatest stadia we know today, eg Camp Nou. The stadium was co-financed by the billionaire Daniël George van Beuningen, who made his fortune in World War I, exporting coal from Germany to England through neutral Netherlands.

In World War II, the stadium nearly got torn down, because the German occupiers needed the materials. Fortunately it didn't come to that. After the war the stadium got extra seats (1949) and stadium lights (1958).

On 29 October 1991 De Kuip was named as being one of Rotterdam's monuments.[1] In 1994 the stadium was extensively renovated to its present form.[1] It became an all seater and the roof was extended to cover all the seats. An extra building was constructed for commercial use by Feyenoord, it also houses a restaurant and a museum, The Home of History.[2]

The stadium has hosted concerts since 1978. The first ones were Bob Dylan and Eric Clapton.[1]

Since 1996, the stadium hasn't hosted many concerts, because of the competition of the Amsterdam ArenA.

Next to De Kuip and Feyenoord's training ground there is another, but smaller sports arena, the Topsportcentrum Rotterdam. This arena hosts events in many sports and in various levels of competition. Some examples of sports that can be seen in the topsportcentrum are judo, volleyball and handball.[6]

A new stadium for Feyenoord is currently being designed. Already nicknamed 'De Nieuwe Kuip', it will be located a few hundred meters from the current Feijenoord Stadion, on the shores of the river Nieuwe Maas (New Meuse). Feyenoord officials have expressed a desire for the new stadium to have a similar atmosphere as the current one. The projected capacity will be 80,000–100,000.[7] The new stadium must be completed in 2016, and could possibly also be Rotterdam's main weapon in a bid for the 2028 Summer Olympics. A definitive design is expected in the following years. Unfortunately, the outlook for the new Feyenoord stadium doesn't look good as one political party from the Netherlands (PVDA) has already said it would not support the build. The PVDA considers it irresponsible to spend hundreds of millions of euros on the new stadium which they don't consider important and thus don't treat it as a priority.[8]