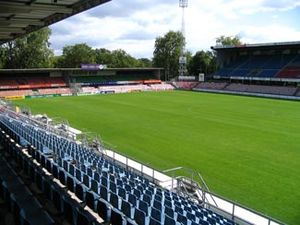 Oosterpark Stadion was the stadium of football club FC Groningen until December 2005. The all-seater stadium in Groningen's Oosterpark neighbourhood was inaugurated on September 30, 1933, and renovated in 1960, 1984 and 1987/88. The stadium has been replaced by the new, larger Euroborg stadium, and the ground it occupied is being redeveloped.

Clubs that played in the stadium earlier are BRC, GVAV Rapiditas and De Oosterparkers. The best visited game ever was FC Groningen-Servette with 19,500 spectators.

The stadium in Groningen hosted two international matches of the Dutch national football team in the early 1980s, with the last being a qualifying match for Euro 1984 on September 7, 1983 against Iceland: 3-0. The goals were scored by Ronald Koeman, Ruud Gullit and Peter Houtman.