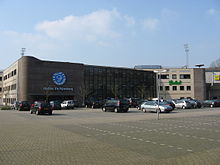 De Vijverberg (Dutch pronunciation: [də ˈvɛi̯.vər.ˌbɛrx]) (English: The Pond Hill) is the football stadium of the football club De Graafschap from Doetinchem. It has a capacity of 12,600 seats.

The name is derived from a hotel with the same name, which stood on the present location of the stadium. Because of all the ponds that had to be filled up, the name Vijverberg arose. The stadium, which was built in 1954, was renovated in 1970, with the construction of the Vijverberg-, Groenendaal- and Spinnenkop stands and the light installation. After the construction of the roofs above the stands in the late eighties, the radical renovation of the Vijverberg began in the summer of 1998. However, with the positioning of seats on the Spinnekop stand, one of the characteristic parts went lost, so in 2008 De Graafschap decided to remove the seats again.