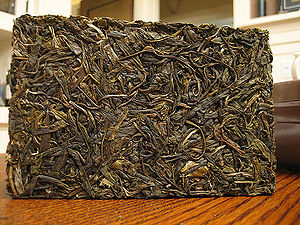 A compressed brick of pu-erh tea . Individual leaves can be seen on the surface of the brick.

Tea bricks (traditional Chinese: 磚茶; simplified Chinese: 砖茶, zhūan chá) or compressed tea (traditional: 緊壓茶; simplified: 紧压茶, jǐnyā chá) are blocks of whole or finely ground black tea, green tea, or post-fermented tea leaves that have been packed in molds and pressed into block form. This was the most commonly produced and used form of tea in ancient China prior to the Ming Dynasty. Although tea bricks are less commonly produced in modern times, many post-fermented teas, such as pu-erh, are still commonly found in bricks, discs, and other pressed forms. Tea bricks can be made into beverages or eaten as food, and were also used in the past as a form of currency.

In ancient China, compressed teas were usually made with thoroughly dried and ground tea leaves that were pressed into various bricks or other shapes, although partially dried and whole leaves were also used. Some tea bricks were also mixed with binding agents such as flour, blood, or manure to better preserve their form so they could withstand physical use as currency.[1] Newly formed tea bricks were then left to cure, dry, and age prior to being sold or traded. Tea bricks were preferred in trade prior to the 19th century in Asia since they were more compact than loose leaf tea and were also less susceptible to physical damage incurred through transportation over land by caravans on the Ancient tea route.

Tea bricks are still currently manufactured for drinking, as in pu-erh teas, as well as for souvenirs and novelty items, though most compressed teas produced in modern times are usually made from whole leaves. The compressed tea can take various traditional forms, many of them still being produced. A dome-shaped nugget of 100g (standard size) is simply called tuóchá (沱茶), which is translated several ways, sometimes as "bird's nest tea" or "bowl tea." A small dome-shaped nugget with a dimple underneath just enough to make one pot or cup of tea is called a xiǎo tuóchá (小沱茶; the first word meaning "small") which usually weighs 3g–5g. A larger piece around 375g, which may be a disc with a dimple, is called bǐngchá (饼茶, literally "biscuit tea" or "cake tea"). A large, flat, square brick is called fángchá (方茶, literally "square tea").

To produce a tea brick, ground or whole tea is first steamed, then placed into one of a number of types of press and compressed into a solid form. Such presses may leave an intended imprint on the tea, such as an artistic design or simply the pattern of the cloth with which the tea was pressed. Many powdered tea bricks are moistened with rice water in pressing to assure that the tea powder sticks together. The pressed blocks of tea are then left to dry in storage until a suitable degree of moisture has evaporated.

Ya'an is the main market for a special kind of tea which is grown in this part of the country and exported in very large quantities to Tibet via Kangting and over the caravan routes through Batang (Paan) and Teko. Although the Chinese regard it as an inferior product, it is greatly esteemed by the Tibetans for its powerful flavor, which harmonizes particularly well with that of the rancid yak's butter which they mix with their tea. Brick tea comprises not only what we call tea leaves, but also the coarser leaves and some of the twigs of the shrub, as well as the leaves and fruit of other plants and trees (the alder, for instance). This amalgam is steamed, weighed, and compressed into hard bricks, which are packed up in coarse matting in subunits of four. These rectangular parcels weigh between twenty-two and twenty-six pounds—the quality of the tea makes a slight difference to the weight—and are carried to Kangting by coolies. A long string of them, moving slowly under their monstrous burdens of tea, was a familiar sight along the road I followed.[2]

The brick tea is packaged [in Kangting] either in the courtyard or in the street outside, and it is quite a complicated process. When the coolies bring it in from Ya'an, it has to be repacked before being consigned upcountry, for in a coolie's load the standard subunit is four bricks lashed together, and these would be the wrong shape for animal transport. So they are first cut in two, then put together in lots of three, leaving what they call a gam, which is half a yak's load. Tea which is going to be consumed reasonably soon is done up in a loose case of matting, but the gams, which are bound for remote destinations, perhaps even for Lhasa, are sewn up in yakhides. These hides are not tanned but are merely dried in the sun; when used for packing they are soaked in water to make them pliable and then sewn very tightly around the load, and when they dry out again the tea is enclosed in a container which is as hard as wood and is completely unaffected by rain, hard knocks, or immersion in streams. The Tibetan packers are a special guild of craftsmen, readily identifiable by the powerful aroma of untanned leather which they exude.

Another prominent guild in Kangting is that of the women tea coolies who shift the stuff from the warehouses to the inns where the caravans start. They have a monopoly on this work and the cheerful gangs of girls are a picturesque element in the city's life. They need to be immensely strong to do a job which consists of carrying over a short distance anything up to an entire yak's load several times a day. Many of them are quite pretty (and well aware of the fact); they look very gay and rather brazen as, giggling and chattering among themselves, they move along with their heavy burdens, which are held in place by a woolen girdle around the chest.[3] 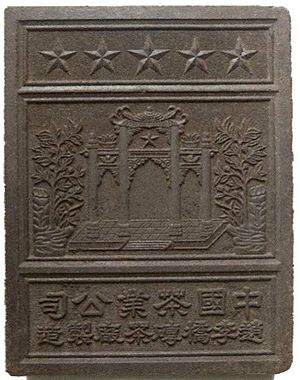 Due to their density and toughness tea bricks were traditionally consumed after they have been ground to a fine powder. The legacy of using of tea bricks in powdered form can be seen through modern Japanese tea powders as well as the pulverized tea leaves used in the lei cha (擂茶) eaten by the Hakka people.

In ancient China the use of tea bricks involved three separate steps:

In modern times, bricks of pu-erh type teas are flaked, chipped, or broken and directly steeped after thorough rinsing. The process of toasting, grinding, and whisking to make tea from tea bricks is now uncommon and not generally practiced.

Tea bricks are used as a form of food in parts of Central Asia and Tibet in the past as much as in modern times. In Tibet pieces of tea are broken from tea bricks, and boiled overnight in water, sometimes with salt. The resulting concentrated tea infusion is then mixed with butter, cream or milk and a little salt to make butter tea, a staple of Tibetan cuisine.[1]

The tea mixed with tsampa is called Pah. Individual portions of the mixture are kneaded in a small bowl, formed into balls and eaten. Some cities of the Fukui prefecture in Japan have food similar to tsampa, where concentrated tea is mixed with grain flour. However, the tea may or may not be made of tea bricks.

In parts of Mongolia and central Asia, a mixture of ground tea bricks, grain flours and boiling water is eaten directly. It has been suggested that tea eaten whole provides needed roughage normally lacking in the diet. 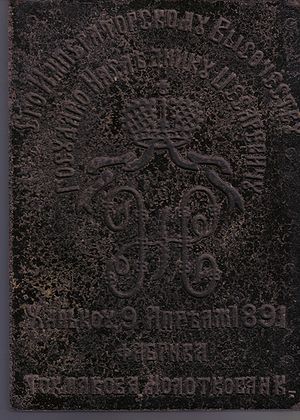 A brick of tea presented to Tzar Nicholas II, 1891

Due to the high value of tea in many parts of Asia, tea bricks were used as a form of currency throughout China, Tibet, Mongolia, and Central Asia. This is quite similar to the use of salt bricks as currency in parts of Africa. Tea bricks were in fact the preferred form of currency over metallic coins for the nomads of Mongolia and Siberia. The tea could not only be used as money and eaten as food in times of hunger but also brewed as allegedly beneficial medicine for treating coughs and colds. Up until World War II, tea bricks were still used as a form of edible currency in Siberia.[1]

Tea bricks for Tibet were mainly produced in the area of Ya'an (formerly Yachou-fu) in Sichuan province. The bricks were produced in five different qualities and valued accordingly. The kind of brick which was most commonly used as currency in the late 19th and early 20th century was that of the third quality which the Tibetans called "brgyad pa" ("eighth"), because at one time it was worth eight Tibetan tangkas (standard silver coin of Tibet which weighs about 5.4 grams) in Lhasa. Bricks of this standard were also exported by Tibet to Bhutan and Ladakh.[4]

While all tea plant tissues accumulated fluorine to some extent, tea bricks that are made from old tea leaves and stems can accumulate large amounts of these elements, which can make them unsafe for excessive or prolonged consumption. Use of such teas has led to fluorosis (a form of fluoride poisoning that affects the bones and teeth) in areas of high brick tea consumption, such as Tibet.[5][6]