DRDO Rustom
Not to be confused with Rostam.

Rustom (English: Warrior) is a Medium Altitude Long Endurance Unmanned combat Aerial Vehicle (UCAV) being developed by DRDO for the three services, Indian Army, Indian Navy and the Indian Air Force of the Indian Armed Forces.[1] Rustom is derived from the NAL's LCRA (Light Canard Research Aircraft) developed by a team under the leadership of late Prof. Rustom B. Damania in the 1980s. The UAV will have structural changes and a new engine.[2] Rustom will replace/supplement the Heron UAVs in service with the Indian armed forces.[3]

Rustom's basic design is derived from the NAL light canard research aircraft (LCRA). The aircraft has been named after Rustom Damania, a former professor of IISc, Bangalore who died in 2001. DRDO decided to name the UAV after him because it is derived from National Aeronautical Laboratories’ light canard research aircraft (LCRA) developed under Rustom Damania’s leadership in the 1980s.[4]

With the Rustom MALE UAV project, DRDO intends to move away from traditional ways of developing products whereby laboratories under DRDO, like the Aeronautical Development Establishment (ADE), which is involved in this project, develop and finalise the product and transfer technology to a production agency.

DRDO will follow a practice of concurrent engineering where initial design efforts also take into consideration production issues, with the production agency participating in the development of the system right from the design stage. The agency will also follow up issues related to infrastructure and expertise for the product and its support, thereby overcoming time delays in crucial projects.[5]

Rustom which bares an uncanny resemblance to Rutan Long-EZ designed by Burt Rutan has a wingspan of 20 metres and weighs 1,800 kg, will be launched by the conventional method and not the launcher as in the case of the Lakshya. Rustom will be able to see the enemy territory up to a distance of 250 km and carry a variety of cameras and radar for surveillance.[6] 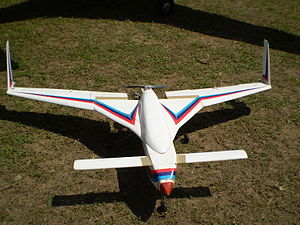 A scaled down model of the Rustom-1 MALE UAV

Currently, negotiations are underway between these companies and the three Indian armed forces since the private majors are looking for support and commitment from them before they start executing any development and production plans. This is because of the fact that the chosen PADP will also have a financial stake in the Rustom project. The Armed Forces would also be asked to take up a financial stake and the Indian government may have to guarantee that a specific number of Rustom UAVs will be bought.[5]

A prototype to validate the technology for the project has been built and the taxi trials has been completed.[7]

First flight of Rustom-I took place on 16-11-2009 at the Taneja Aerospace Air Field near Hosur. The demonstration resulted in the prototype crashing to the ground. Stated by the DRDO, the taxiing and takeoff was exactly as planned. Due to misjudgment of altitude of the flight, the on-board engine was switched off through ground command which made the on-board thrust developed to go to zero.[8] Despite the mishap, the state-owned Defence Research and Development Organisation stated: "The flight proved the functioning of a number of systems such as aerodynamics, redundant flight control, engine and datalink, which go a long way towards the development of a complex UAV."

At least 10 more test flights of the Rustom design are expected before the system can be taken up for production. The test work is being performed using a sub-scale version of the air vehicle (Rustom-I TD) with a 1.5 m (4.9 ft) wing span and an overall length of 3m.

Rustom-1, a prototype/technology demonstrator of the medium altitude UAV, had its second "maiden" flight on 15/10/2010. In this test flight, the UAV flew for 30 minutes at an altitude of 3000 feet. The test was conducted in Hosur.[9] The Indian army impressed with the Rustom-1 will use it as a MALE UAV.</ref>

RUSTOM-1 unmanned air system made its 5th SUCCESSFUL flight on morning of 12 Nov 2011, flying for 25 minutes at 2300-ft AGL at a speed 100 Knots. Other details of test are awaited.

There will be three variants of the Rustom UAV.[11]