First opened on December 5, 1980, Canada's Currency Museum is located on the ground floor of the Bank of Canada in Ottawa. It is the public face of the National Currency Collection, which contains over 100,000 currency-related artifacts from around the world. These include coins, bank notes, dies, plates, and engraving tools, bank and government ledgers, weights and scales, cash registers, wallets, numismatic medals and cards and examples of counterfeit money.

The National Currency Collection also encompasses a library and archive, which contain over 8,500 books, pamphlets, catalogues and journals dating back to the Middle Ages. [1]

The Museum offers various educational programs for school groups and the general public, in both English and French.[2] 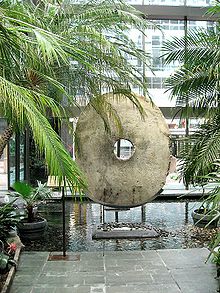 A rai stone, used as currency on the island of Yap, stands in the atrium of the Bank of Canada

The creation of a national currency collection was first proposed in the late 1950s by Bank Governor James Coyne.

Numismatic consultant G.R.L. Potter was hired in 1959 to help develop the collection. Under his guidance the Bank began collecting artifacts that depicted the development of Canadian currency over the previous 150 years.

By 1962 Sheldon S. Carroll had been hired as the Bank’s first Curator. Governor Louis Rasminsky directed Carroll to develop as complete as possible a collection of Canadian coins, tokens and paper money. Carroll also established collections of ancient, medieval and modern foreign currency, and of artifacts related to banking and monetary matters. The core of the Collection was assembled during this period. [3]

Artifacts were acquired from individual collectors, private-sector firms and public agencies. The collection of J. Douglas Ferguson, perhaps the best-known Canadian numismatist of his time, was purchased in 1963. This acquisition included paper money issued during the French regime, and a selection of ancient, medieval and contemporary coins.

Another significant acquisition came in 1965 with the transfer of a large collection of coins from the Public Archives of Canada. These included the Hart Collection, which had been purchased by the Canadian government in 1883.

In 1974 the Bank purchased a large collection from the Château de Ramezay, home of the Numismatic and Antiquarian Society of Montréal, Canada’s first numismatic society. This acquisition included the collection of R.W. McLachlan, Canada’s leading numismatist of the late 19th and early 20th centuries. [4]

In 1977 the Canadian Secretary of State formally designated the Bank’s acquisitions as the National Currency Collection. [5]

The Currency Museum opened its doors to the public in the newly-expanded Bank of Canada Building on December 5, 1980.