The Canadian Museum of Nature (French: Musée Canadien de la nature) is a natural history museum in Ottawa, Ontario, Canada. Its collections, which were started by the Geological Survey of Canada in 1856, include all aspects of the intersection of human society and nature, from gardening to gene-splicing.[1] The Museum is affiliated with the Canadian Museums Association, the Canadian Heritage Information Network, and the Virtual Museum of Canada.

The building, known as the Victoria Memorial Museum Building, was built in former farm fields known as Appin Place, the estate of the Scottish-born merchant, William Stewart. The neighbourhood became known as Stewarton and residential development started in the area during the 1870s.[2] The government purchased the land in 1905 hoping to develop the site as a sort of 'end piece' to complement the stone structure of the Canadian Parliament Buildings at the opposite end of Metcalfe Street, on Parliament Hill.[3] 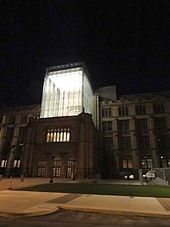 This massive stone structure is an excellent example of early 20th-century architecture in Ottawa, and was built for $1,250,000 by architect David Ewart who is responsible for many similar structures around the city.[3] The construction of the building involved the importing of 300 skilled stonemasons from Scotland.[3] The architectural style is sometimes described as Scottish baronial. Ewart was sent to Britain to study the architecture of Hampton Court and Windsor Castle, which greatly influenced his design of this building.[4]

Unfortunately, because of the presence of unstable Leda clay in the geology of the site, a tall tower that was situated at the front of the building had to be taken down in 1915 due to settling and the concern that the foundation could not support the weight. The unstable site forced some workers to stop working, as shifting foundations in the basement shot bricks and stones out from the walls, hitting some construction workers.[5]

The building found itself filling a more auspicious role than originally intended when in 1916, fire consumed the majority of the Centre Block on Parliament Hill. The recently completed Victoria Museum Building became the temporary home of the House of Commons from 1916 to 1919 and the affairs of the government were run from the site until the completion of the new Parliament building in 1922.[3][6] The Senate used the first floor mineral room (now Talisman Energy Fossil Gallery) and the Commons used the amphitheatre on third floor (now the Salon). Chairs and tables for members were brought in, as well as the speaker's chair for both the Senate and Commons.

The Victoria Memorial Museum building was designated a National Historic Site of Canada in 1990.[7][8]

A major renovation of all parts of the building began in 2004 and was completed in 2010, including a lighter-weight glass "lantern" taking the place of the tower removed in 1915. For most of the duration of the renovation, parts of the building were still open to the public, but the entire building was closed temporarily on 26 April 2010 for final changes. The newly renovated museum re-opened again on 22 May 2010, and the lantern structure was christened the "Queens' Lantern" in honour of both Elizabeth II, who visited the building on her 2010 royal tour, and Queen Victoria.[9][10][11]