Argyreia nervosa is a perennial climbing vine that is native to the Indian subcontinent and introduced to numerous areas worldwide, including Hawaii, Africa and the Caribbean. Though it can be invasive, it is often prized for its aesthetic value. Common names include Hawaiian Baby Woodrose, Adhoguda अधोगुडा or Vidhara विधारा (Sanskrit), Elephant Creeper and Woolly Morning Glory. There are two botanical varieties: Argyreia nervosa var. nervosa described here, and Argyrea nervosa var. speciosa, a species used in ayurvedic medicine, but with little to no psychoactive value.

The plant is a rare example of a plant whose hallucinogenic properties were not recognized until recent times. While its cousins in the Convolvulaceae family, such as the Rivea corymbosa (Ololiuhqui) and Ipomoea tricolor (Tlitliltzin), were used in shamanic rituals of Latin America for centuries, the Hawaiian Baby Woodrose was not traditionally recognized as a hallucinogen. Its properties were first brought to attention in the 1960s, despite the fact that the chemical composition of its seeds is nearly identical to those of the two species mentioned above, and the seeds contain the highest concentration of psychoactive compounds in the entire family.[citation needed]

Within the first one to two years of growth, this plant grows into a compact bush. After that, some of the leaves will fall off and it will elongate into vines. The vines have been known to grow up to 10 metres (33 ft) in length. If consistent water availability is not maintained, these vines may die out and be replaced by fresh growth. The vine will dry out to the closest node during this point.[citation needed]

Hawaiian Baby Woodrose is very well adapted to a dry tropical climate such as areas near rivers and creeks but with a distinct wet and dry season. It is not naturally found in the Wet tropics.[citation needed]

The plant can start growing flowers as early as 18 months from seed. For this to occur, there must be sufficient watering and adequate room for the roots to grow; it can take up to five years for the first signs of flowering to become visible.[citation needed]

If the leaves receive too much light they will scorch or wilt; this is also seen with lack of watering.[citation needed]

Some people place approximately 2–5 centimetres (1–2 in) in rich potting soil with a good drainage system. It is very important during the first stages of growth to keep the soil moist, though well drained, as saturation will cause root rot. It is important to keep the mix well aerated.[citation needed]

The massive root system of this plant can cause the plant to become rootbound within the first year or so. For example, a 5-year-old plant in a 15-gallon pot (after only six months) will begin to show signs of becoming rootbound. It is suggested to use a 55-gallon drum or a feeding trough (commonly used for livestock and horses).[citation needed] 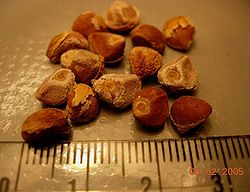 The seeds are found in the pods of dried flowers. These cannot be harvested until the pods are completely dried. There are 3 to 5 seeds, commonly 4, per flower.[citation needed]

In most countries it is legal to purchase, sell or germinate Argyreia nervosa seeds, but they are generally unapproved for human consumption. Depending on the country, it may be illegal to buy seeds with the intention to consume them, and several countries have outlawed ergine-containing seeds altogether. In Australia, retailers are required to treat their seeds with chemicals to discourage consumption, and it is illegal to buy or possess untreated seeds.[4][unreliable source?]

Extracting ergine from Argyreia speciosa seeds is illegal in the USA, since it is a scheduled substance. It is classified as a schedule III depressant by the DEA, although the substance has hallucinogenic/psychedelic properties.[5][unreliable source?]

In an animal model of ulcers in rats, large doses of the extract of Argyreia speciosa leaves (50, 100 and 200 mg/kg body weight) showed dose-dependent antiulcer activity.[6]