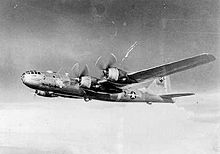 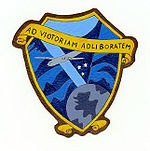 Emblem of the 444th Bombardment Squadron

During World War II, the airfield hosted the United States Army Air Force 444th Bombardment Group. Charra was originally designed for B-24 Liberator use. In 1943 it was designated as a B-29 Superfortress Base for the planned deployment of the United States Army Air Forces XX Bomber Command to India. Advance Army Air Forces echelons arrived in India in December 1943 to organize the upgrading of the airfield and thousands of Indians labored to upgrade the facility for Superfortress operations.

On 11 April 1944 the 444th arrived after a month-long deployment over the South Atlantic transport route after completing training at Great Bend AAF, Kansas. The deployment consisted of traveling to Morrision Field, Florida, then south though the Caribbean to Natal, Brazil. From Brazil the South Atlantic was crossed arriving in West Africa and re-assembling at Marrakesh, Morocco. The group then flew north and west from Morocco through Algeria and Egypt, before arriving at Karachi. By the time the group arrived at Charra, the month-long trip had taken its toll on the aircraft and personnel. Support elements of the group included the 5th, 6th, 7th and 8th Bomb Maintenance Squadrons; the 12th Photo Lab, and the 25th Air Service Group.

Almost immediately upon arrival, the groups B-29s were grounded due to engine fires, which were caused by the engines not being designed to operate at ground temperatures higher than 115 degrees F, which were typically exceeded in India. Modifications had to be made to the engines and also to the cowl flaps. After these modifications, B-29 flights were resumed

From India, the 444th Bomb Group planned to fly missions against Japan from airfields in China. Kwanghan Airfield (A-3), located just to the southwest of Chendu in south-central China was designated as the forward staging base for the group.

However, all the supplies of fuel, bombs, and spares needed to support operations from Kwanghan had to be flown 1,200 miles from India over "The Hump" (the name given by Allied pilots to the eastern end of the Himalayan Mountains), since Japanese control of the seas around the Chinese coast made seaborne supply of China impossible. Many of the supplies had to be delivered to China by the B-29s themselves. For this role, they were stripped of nearly all combat equipment and used as flying tankers and each carried seven tons of fuel for the six hour (one way) flight, which itself was almost at the limit of the B-29's range. The Hump route was so dangerous and difficult that each time a B-29 flew from India to China it was counted as a combat mission. It took six round-trip flights by each Superfortress to Kwanghan in order to mount one combat mission from the forward base.

The first combat mission by the group finally took place on 5 June 5 when squadrons of the group off from India to attack the Makasan railroad yards at Bangkok, Thailand. This involved a 2261-mile round trip, the longest bombing mission yet attempted during the war.

Difficulties encountered at Charra forced the unit to move to Dudhkundi Airfield on 1 July 1944, leaving Charra to become a transport base for Tenth Air Force. C-87 Liberators and C-46 Commandos flew from Charra into China to support the XX Bomber Command forward bases as well as to the Air Transport Command depot at Barrackpore, picking up supplies. In June 1945 the last Americans left the base, turning it over to the British colonial government.

The postwar history of the airfield is unclear, however today it is long abandoned. No structures remain, however traces of runways and taxiways can be viewed from the air. Some small villages appear to have taken over the former billeting areas.