Born among the ancient Saxon settlers of east Transylvania, Arz was the product of a noble "Seven Mountains" family.[2] His father, Albert Arz von Straussenburg served as an evangelical preacher and curate as well as a member of the House of Magnates. Schooled in Dresden and Sibiu, Arz graduated "with great achievement", and went on to read law at university during which time he volunteered for one years service in a Hungarian Feldjäger battalion during 1876–1877.

Having successfully completed a year's military service, Arz sat, and passed, the reserve officers examination and went on to apply for and successfully obtain a commission as a regular officer. In 1878 he received a commission with the rank of Leutnant. 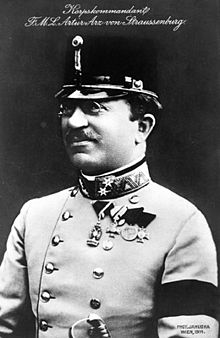 Arz as a Lieutenant-Field Marshal in 1912

Attaining the rank of Oberleutnant, he attended the Imperial Kriegschule in Vienna 1885–1887, which saw him again excel and appointment to the General Staff in 1888. Promoted to Hauptmann, and assigned to a corps staff, Arz was made Adjutant to Feldzeugmeister Baron Schönfelda and then oncemore to the General Staff in 1898 where he was to remain with a few exceptions until 1908.

Already having been promoted to the rank of Major, Arz was appointed Oberstleutnant and attached to the 2nd Corps, commanded by Archduke Eugen, following his assignment to the General Staff. Promotion to Oberst on 1 May 1902 saw him appointed to the management bureau of the General Staff, a department which he was appointed head of in May 1903. In 1903 he also married a Hungarian noblewoman, Stefanie Tomka von Tomkahaza und Falkusfalva, with whom he had a daughter.

In 1908 Arz was once again promoted, this time to the rank of Generalmajor following which he received command of the 61st infantry brigade. Having been steadily promoted and seen as a promising and competent officer, he received an "outstanding evaluation" from his old commander Erzherzog Eugen during 1911's fall manouvres. 1912 saw him promoted to command a division – the 15th infantry at Miskolc. Soon afterwar Arz attained the rank of Feldmarschall-Leutnant and in 1913 was reassigned to the war ministry in Vienna to head up a section.

At war's break in Summer 1914, von Straussenburg requested a transfer to a field assignment and was again given command of the 15th infantry [3] which participated in the closing stages of Komarów. Almost immediately thereafter, on 7 September, Arz was given command of the 6th corps, taking over from Boroević.[4] In charge of the 6th corps he performed outstandingly and with great energy at Limanowa-Lapanów where his unit formed part of the fourth army. At Gorlice-Tarnów he was gain to pay an outstanding role and was in command again at Grodek-Magierow and Brest-litowsk during the summer of 1915. In September 1915 he was promoted to the rank of General der Infanterie, and having fought alongside Mackensen's 11th army he gained the respect of the Germans in his abilities as a commander.

With the threatened entry of Romania into the war on the Entente side, Arz was reassigned for 6th corps and appointed to command the newly reorganised 1st Army on 16 August 1916. Arriving at Klausenburg where forces were being marshalled to repel an expected Romanian advance into Transylvania, he stated "I am an Army Commander without an Army". Indeed on the Romanian declaration of war on August 27, the 1st 'Army' comprised a mere 10,000 men (half a division)[citation needed]. A slow Rumanian advance combined with hysterical outcry from Budapest led to the 1st Army being considerably and rapidly strengthened to drive back the challenge from the south. 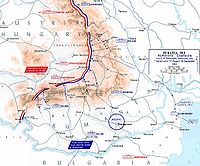 Romanian forces crossed the frontier on 28 August 1916 with six separate forces pushing through the six Carpathian passes to converge on Braşov. They succeeded in pushing nearly as far as Sepsiszentgyörgy in the Szekler lands by 4 September. In order to fend off these six separate invasions, Arz, now fighting on home turf, ordered the 71st Infantry Division and 141st & 142nd Brigades to the sector. Simultaneously, the Romanian North Army sought to advance along the entire Moldavian front in the Eastern Carpathians, though in fact this amounted to an advance in the northern sector where the Russian 9th Army was best placed to aid the advance. To counter this strike Arz deployed the 16th, 19th and elements of the 61st divisions.

In cooperation with the German 9th Army the Romanian invasion was repelled and their forces were thrown back across the border within eight weeks, leading to Arz receiving the respect and appreciation of the new Kaiser, Karl I. Other commanders also hailed his achievements during the campaign with Conrad writing he "has proved to be an energetic resolute leader in the most difficult situations..." and Boroević stating Arz was an "Honourable, noble character....outstanding general.."

Arz was to remain in charge of the 1st Army until February 1917, after major operations in Romania ended, with help from the Falkenhayn's 9th German Army and the German Army of the Danube under Mackensen.

Karl succeeded the Franz Joseph as Emperor on November 21, 1916, bringing with him a wave of change across the upper-echelons of the government and military command. One causualty of these changes was Conrad with Karl reported to 'not want a genius to command his armies' [5] but, following on the from the experience of the supremely gifted but often unsuccessful Conrad, rather someone who was just capable. Arz was acquainted to the emperor as not only a capable commander of troops but also possessed a concilatory manner which did not led the Emperor to think he was being patronised during discussions on military matters as was the case with other commanders. Arz also, unlike Conrad, was not overtly political, was wholly committed to the Central Powers and had full faith in the Emperor.

Arz made every effort to meet his Emperor's wishes once appointed in March 1917, but unlike his predecessor, Arz acted as personal advisor to the Emperor on army matters rather than as a driver of his own strategy as had been Conrad's hallmark. His tenure at the head of the army saw increasing German control over Austro-Hungarian forces and reduced independence of action, but also a number of notable victories in the spring and summer of 1917, including the clearing of Galicia and the Bukovina, as well as the breakthrough at Flitsch Tolmein and the great victory at Caporetto later in the year.

Arz (right) with Ludendorff (left) at Army Headquarters in Baden, 1917

Promoted to the rank of Generaloberst on 26 February 1918 and raised to the nobility in early the same year, Arz was ultimately responsible for planning the invasion of Italy which was to take place during the summer of 1918 with Russia now knocked out of the war and considerable veteran forces at his disposal. Whilst planning was underway both Conrad and Boroević demanded to lead the offensive and Arz nor the AOK were able to make a decisive decision and instead adopted the compromise suggested by the Emperor to divide forces and attack Italian positions on the front from two different directions, resulting in utter failure of the offensive at the Piave River in June 1918.

Arz offered his resignation and took full responsibility for failure of the massive invasion of Italy, which the Emperor refused to accept.[6] By late October 1918 he could see ultimate defeat for Imperial forces was inevitable and had drawn up plans for an orderly troop withdrawal in the event of an armistice so as to prevent unnecessary further bloodshed. An armistice with Italy was concluded on 3 November 1918 and was to come into effect 36 hours later, during which time thousands of Imperial troops were captured whilst believing themselves to be at peace due to poor communication from Army High Command.

End of the war

During the night of the 2–3 November 1918, Karl relinquished command of the armed forces and in a handwritten note which can still be found in the Vienna war archives, wrote:

Not wanting responsibility for handling the armistice, Arz declined the appointment, and Kövess took up appointment as commander-in-chief instead. Arz however undertook the position de facto until Field Marshal Kövess could take up his office.

After the collapse Arz lived in Vienna. With Transylvania and the Bukovina awarded to Romania after the war, he refused to return to his home in a country which he had played a significant role in the defeat of only a few years before. Technically a Hungarian citizen, although an ethnic German, he was initially denied a pension from the Hungarian government and lived in near poverty surviving on stipends from a support fund organized by former officer comrades to help officers in such situations. In 1926 Hungary granted a pension on condition that it be personally collected from Budapest at all times. During this time Arz wrote of his experiences during the war which, unlike many of his contemporaries, contained no element of self-justification or political statement.

During a stay in Budapest in order to collect his pension Arthur Baron Arz von Straussenburg suffered an heart attack and died on July 1, 1935. He was buried with the highest military honours at the Kerepester cemetery in Budapest.