Meron (Hebrew: מֵירוֹן‎‎, Meiron) is a moshav (cooperative village) on the slopes of Mount Meron, in the Upper Galilee in northern Israel near Safed, and within municipal jurisdiction of the Merom HaGalil Regional Council. Meron is most famous for the tomb of Rabbi Shimon bar Yochai, and is the site of annual mass public commemoration of Lag Ba'omer.[1]

The association of Meron with the ancient Canaanite city of Merom or Maroma is generally accepted by Archeologists. According to Avraham Negev, by the Second Temple period, Merom was known as Meron. Meron is mentioned in the Bible as the site of Joshua's victory over the Canaanite kings.[2] In the 12th century, Benjamin de Tudela visited Meron and described a cave of tombs located there believed to hold the remains of Hillel, Shammai, and "twenty of their disciples and other Rabbis." Until at least 1931, Meron consisted of an Arab and Jewish quarter (See also Mirun) . Meron's Arab inhabitants were driven out or have fled during the Israeli War of Independence. The modern village of Meron was founded in 1949 on the site of the ancient settlement by Orthodox soldiers discharged after the war.[1]

Among the local attractions are the Meron Vineyards. Meron is conducive to growing grapes for wine as a result of its 600-meter altitude and chalky soil. The vineyard was first planted in 2000 and is part of the Galil Mountain Winery.

The association of Meron with the ancient Canaanite city of Merom or Maroma is generally accepted, though the absence of hard archaeological evidence means other sites a little further north, such as Marun as-Ras or Jebel Marun, have also been considered.[3][4] Merom is mentioned in 2nd milleniun BCE Egyptian sources, and in Tiglath-pileser III's accounts of his expedition to the Galilee in 733-732 BCE (where it is transcribed as Marum).[3][4]

Soundings conducted below the floors of houses excavated in the 1970s indicate the presence of even earlier structures with a different layout. While these lower levels have not yet been excavated, the possibility that they date back to the Early Bronze Age was not ruled out by the archaeologists. A handful of artifacts dating to the Early Bronze Age, including seal impressions and a basalt bowl, were also found during the digs.[5]

According to Avraham Negev, an Israeli archaeologist, by the Second Temple period, Merom was known as Meron.[5] It is mentioned in the Talmud as being a village in which sheep were reared, that was also renowned for its olive oil.[6][7] The Reverend R. Rappaport ventured that merino, the celebrated wool, may have its etymological roots in the name for the village.[6]

Excavations at Meron found artifacts dating to the Hellenistic period at the foundation of the site.[8] The economic and cultural affinities of the inhabitants of the Meron area at this time were directed toward the north, to Tyre and southern Syria in general.[8] Josephus fortified Meron in the 1st century CE and called the town Mero or Meroth; however, Negev writes that Meroth, another ancient town, was located further north, possibly at the site of Marun as-Ras.[5]

A tower which still stands at a height of 18 feet (5.5 m) was constructed in Meron in the 2nd century CE.[7] In the last decade of the 3rd century CE, a synagogue was erected in the village. Known as the Meron synagogue, it survived an earthquake in 306 CE, though excavations at the site indicate that it was severely damaged or destroyed by another earthquake in 409 CE.[9][10] "One of the largest Palestinian synagogues in the basilica style," it is the earliest example of the so-called 'Galilean' synagogue, and consists of a large room with eight columns on each side leading to the facade and a three-doored entrance framed by a columned portico.[9][11] Artifacts uncovered during digs at the site include a coin of Probus (276-282 CE) and African ceramics dating to the latter half of the 3rd century, indicating that the city was commercially prosperous at the time.[9] Coins found in Mieron are mostly from Tyre, though a large number are also from Hippos, which lay on the other side of Lake Tiberias.[11] Peregrine Horden and Nicholas Purcell write that Meron was a prominent local religious centre in the period of late Antiquity.[12] Some time in the 4th century CE, Meron was abandoned for reasons as yet unknown.[13]

Denys Pringle describes Meron as a "[f]ormer Jewish village," with a synagogue and tombs dating to the 3rd and 4th centuries, noting the site was later reoccupied between 750 and 1399.[14]

In the 12th century, Benjamin de Tudela, a Navarrese rabbi, visited Meron and described a cave of tombs located there believed to hold the remains of Hillel, Shammai, and "twenty of their disciples and other Rabbis."[15] On his visit to Meron in 1210, Samuel ben Samson, a French rabbi, located the tombs of Shimon Bar Yochai and his son Eleazar there.[15] A contemporary of the second Jewish revolt against Rome (132-135 CE), Bar Yochai is venerated by Moroccan Jews, whose veneration of saints is thought to be an adaptation of local Muslim customs.[16] From the 13th century onward, Meron became the most frequented site of pilgrimage for Jews in Palestine.[12]

In the early 14th century, Arab geographer al-Dimashqi mentioned Meron as falling under the administration of Safad. He reported that it was located near a "well-known cave" where Jews and possibly non-Jewish locals traveled to celebrate a festival, which involved witnessing the sudden and miraculous rise of water from basins and sarcophagi in the cave.[17]

Palestine was incorporated into the Ottoman Empire in 1517, and by 1596, Meron was a large village of 715 located in the nahiya ("subdistrict") of Jira, part of Sanjak Safad. The village paid taxes on goats, beehives, and a press that processed either grapes or olives.[18]

Meron suffered relatively minor damage in the Galilee earthquake of 1837. It was reported that during the earthquake the walls of the tombs of Rabbi Eleazer and Rabbi She-Maun were dislodged, but did not collapse.[19] 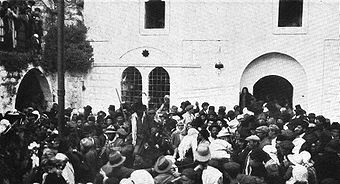 A number of European travellers came to Meron over the course of the 19th century and their observations from the time are documented in travel journals. Edward Robinson, who visited Meron during his travels in Palestine and Syria in the mid-19th century, describes it as "a very old looking village situated on a ledge of bristling rocks near the foot of the mountain. The ascent is by a very steep and ancient road [...] It is small, and inhabitated only by Muhammedans."[15] The tombs of Shimon bar Yochai, his son R. Eleazar, and those of Hillel and Shammai are located by Robinson as lying within a khan-like courtyard underneath low-domed structures that were usually kept closed with the keys held in Safad. Robinson indicates that this place was the focal point of Jewish pilgrimage activities by his time; the synagogue is described as being in ruins.[15]

Laurence Oliphant also visited Meron sometime in the latter half of the 19th century. His guide there was a Sephardic rabbi who owned the land that made up the Jewish quarter of the village. Oliphant writes that the rabbi had brought 6 Jewish families from Morocco to till the land, and that they and another 12 Muslim families made up the whole of the village's population at the time.[20] Karl Baedeker described it as a small village that appeared quite old with a Muslim population. By the late 19th century, Meron was a small village of 50 people who cultivated olives.[18][21] 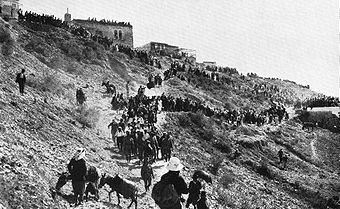 Towards the end of World War I, the ruins of the Meron synagogue were acquired by the "Fund for the Redemption of Historical Sites" (Qeren le-Geulat Meqomot Histori'im), a Jewish society headed by David Yellin.[22] Until at least 1931, Meron consisted of an Arab and Jewish quarter, with the former being the larger one and the latter being built around the tomb of bar Yochai. That year, there were 259 Arabs and 31 Jews. Sami Hadawi's 1945 survey, conducted toward the end of the British Mandate in Palestine, depicted an entirely Arab population. Meron had a boy's elementary school. Agriculture and livestock was the dominant economic sectors of the village, with grain being the primary crop, followed by fruits. Around 200 dunams of land were planted with olive trees, and there were two presses in the village used to process olives.[18]

Meron's Arab inhabitants were driven out or have fled during the 1948 Arab-Israeli war.[23]

On July 14, 2006, a Katyusha rocket fired from Lebanon exploded in Meron, claiming 2 lives - Yehudit Itzkovich, 57, and her 7-year-old grandson Omer Pesachov - and injuring four others. A new barrage of rockets hit Moshav Meron on July 15; there were no injuries.

Meron is most famous for the tomb of Rabbi Shimon bar Yochai, a first-century rabbi, who contributed greatly to the Mishna, is often quoted in the Talmud, and to whom is attributed authorship of the kabbalistic book of Zohar. During the annual mass public commemoration of Lag Ba'omer, hundreds of thousands of Jews make a pilgrimage to the site. During the celebrations attended mostly by religious Jews, a highlight is the custom to perform the upsherin. With torches, song and feasting, the Yom Hillula is celebrated by tens of thousands of people. This celebration was a specific request by Rabbi Shimon bar Yochai of his students. It is a custom at the Meron celebrations, dating from the time of Rabbi Isaac Luria, that three-year-old boys are given their first haircuts (called upshirin), while their parents distribute wine and sweets.[24]