Head is the soundtrack to the band's first and only theatrical release, Head. It was The Monkees' sixth album and their last to feature Peter Tork until 1987's Pool It! and the last to feature all four Monkees until 1996's Justus.

The original issue of the record (Colgems #COSO-5008) featured a front cover with a surface of aluminized PET film, meant to reflect the listener's "head" (face) back at him. With the movie having only a limited release (and virtually no publicity), the point was largely lost, and while the cover was innovative for its time, manufacturing was problematic; Micky Dolenz recalled years later that the cover was "actually ruining the printing presses at RCA!" A March 1985 LP reissue from Rhino Records (RNLP-145) was less problematic by using foil paper instead, the end result less reflective than the original. The presently in-print CD from Rhino (R2-71795), first issued 1994, has a grey cover that is not reflective at all.

Showing the growing influence of Frank Zappa on the Monkees' circle (Zappa even has a cameo role as "The Critic" in the film itself), the soundtrack album intersperses the six proper songs ("Porpoise Song," "Circle Sky," "Can You Dig It?," "As We Go Along," "Daddy's Song" and "Long Title: Do I Have To Do This All Over Again?") with bits of Ken Thorne's incidental music, dialogue fragments and oddball sound effects, for an overall effect close to Zappa's We're Only in It for the Money.[4]

The selection of music and dialogue approximates the flow of the movie itself, and was compiled by actor Jack Nicholson, who cowrote the film's shooting script. Nicholson recalled in Monkee Mania how he observed Michael Nesmith working on the album in the studio, asked if he could try some editing, and Nesmith let Nicholson take over the session, because "I just want to go home!".

On October 26, 2010, Rhino Records released a three-disc deluxe box set through its Rhino Handmade division. Along with the three discs, the set contained a 27 page booklet and a bonus 7" record that includes unreleased instrumental versions of "Porpoise Song" and ‚"As We Go Along."

The front cover of the box also features an authentic reproduction of the album's original front cover, printed on foil mylar to reflect the person's head. 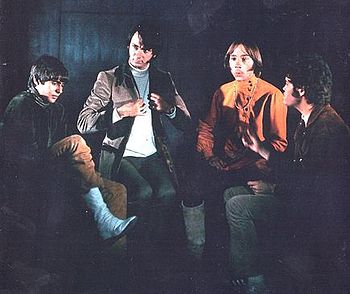 The Monkees during the filming of Head