Kosovo as a precedent

Further information: International reaction to the 2008 declaration of independence by Kosovo

In an emergency session of the UN Security Council Serbian President Boris Tadić asked the Council, "Are we all aware of the precedent that is being set and are we aware of the catastrophic consequences that it may lead to?" The Permanent Representatives of the United States, United Kingdom and France presented their opinion that the Kosovo case is sui generis in nature and could not be perceived as a precedent.[6]

The setting of a precedent was mentioned by many countries, such as Argentina,[7] China, Cuba,[8] Greece and Spain. India stated that Kosovo "can set a very dangerous precedent for similar cases around the world."[9] The then Russian President Vladimir Putin described the recognition by Western powers of Kosovo independence as "terrible precedent, which will de facto blow apart the whole system of international relations, developed not over decades, but over centuries."[10] He then went on to say, "[t]hey have not thought through the results of what they are doing. At the end of the day it is a two-ended stick and the second end will come back and hit them in the face."[10]

Some analysts at the time called ignoring Russian objections and the move by the United States and the EU-3 a mistake, with Ted Galen Carpenter of the Cato Institute stating that their view of Kosovo being sui generis and setting no precedent as "extraordinarily naïve".[11] It was also suggested that Russia could use the case of Kosovo as pretext for recognising Abkhazia and South Ossetia in the future.[11][12] Other analysts, including the Heritage Foundation, offer that Kosovo is no precedent due to its administration by the United Nations as a protectorate for seven years and was blocked from being admitted to the United Nations due to Russia and China being able to use their veto in the United Nations Security Council.[13]

In hearings before the United States House Committee on Foreign Affairs, California Republican Congressman and member of the Subcommittee on International Organizations, Human Rights, and Oversight, Dana Rohrabacher, said there is an "obvious analogy between Kosovo and what's going on in Georgia" and continued to say "Now the only difference is of course, we're Americans and they're Russians. And the people trying to breakaway there were pro-Russian."[14][15] This echoes sentiments he expressed in 2007, when he stated the United States "reflexively take[s] the anti-Russia position" due to that "the majority of US foreign policy establishment formed in the Soviet era, when they dealt with developing a strategy to surround, weaken, and humiliate Russia."[16]

In July 2008, in a speech to Russian ambassadors on Russian foreign policy, Dmitry Medvedev opined that "for the European Union, Kosovo is almost what Iraq has proved to be for the United States" and that they acted unilaterally in pursuit of their own self-interests and undermined international law in the process.[17]

In October 2009, Dmitry Medvedev said that parallels between Kosovo and South Ossetia are "inappropriate" and that "We are categorically against drawing parallels between the Balkan events and the events in the Caucasus. As concerns South Ossetia – it’s our unambiguous, absolutely clear position – it about repelling direct military aggression. And what was done by Russia after that, was done in full accordance with the UN Charter." and that Kosovo's unilateral declaration of independence and the events that followed "have confirmed the inadequacy of attempts to adjust the solution of complex international problems to considerations of notorious political expediency. We consider it unacceptable to do what was done in the Kosovo precedent – to use the lack of progress at negotiations as the reason for unilateral actions, including recognition of new international legal entities.".[18]

As a precedent in other disputes

"Russia will actively contribute to the peaceful solutions of all conflicts in the CIS on the basis of international law, respect for all principles of the United Nations Charter previously reached by agreement, in the search of agreement between the sides involved in the conflict. We will responsibly carry out our intermediary mission in the negotiation process, this in full measure concerns Pridnestrovia and Nagorno Karabakh. Everywhere has its own peculiarities, its formats and mechanisms of mediation. But the South Ossetian crisis does not create a precedent for them."[19]

He went on to give the following explanation for this position:

"Of those who are engaged in the regulation of Nagorno Karabakh and Pridnestrovie, none of them plan to violate international law, break off the existing agreements, violate the agreed format of regulation, bomb civilians and peacekeepers. There is no one there who would want to guarantee territorial integrity by means of the mass murder of people who they consider their own citizens, residents of their own country. There are no parallels possible. Thank God, Saakashvili is a one-of-a-kind phenomenon."

The recognition of Abkhazia and South Ossetia by Russia have rekindled hopes of a solution to the Nagorno Karabakh problem. The declaration was welcomed by the Nagorno Karabakh republic and many pro-Independence parties in Armenia. The French ambassador in Armenia Serzh Smessov commented that "the events in Georgia have changed the regional situation, and in that connection we hope that there will arise the possibility of rapid regulation of the Karabakh conflict."[20]

In Armenia six parties; the Union "Constitutional Justice", the Democratic Party of Armenia, the United Communist Party of Armenia, the Christian-Democratic Union of Armenia, Union "National Self-Determination" and the People's Party welcomed the moves by the Russian Federation.[21] The Union "Constitutional Justice" in a declaration stated that "today an unprecedented favourable situation for the international recognition of the Nagorno Karabakh Republic has come to head, and Armenian diplomacy does not have the right to delay. What Armenian and Karabakh diplomacy could not do in 17 years, Russia has done in 20 days." Тhe declaration went on to say that "in the conditions of the conflicts which have arisen on post-Soviet space the thesis of territorial integrity cannot be a method for solving conflicts. On the contrary, the continued repetition of this thesis can lead the conflict to military confrontation, and all of the consequences that entails."[22] The Armenian President Serzh Sargsyan, however, stated that Armenia will not formally recognise Abkhazia and South Ossetia as independent states any time soon but reiterated his support for their residents’ right to self-determination. He also said that Armenia will not recognise them for the same reason that it did not recognise Kosovo’s independence and that Armenia can not recognise another entity in the same situation as long as it has not recognised the Nagorno-Karabakh Republic.[23] Also, many have expressed concern for the national security of Armenia should it recognise the breakaway republics. Secretary of the opposition party Heritage Stepan Safaryan expressed the view that for Armenia to recognise would be dangerous as it could damage Armenia's good relations with Georgia and leave it with yet another hostile neighbour to the north.[24] 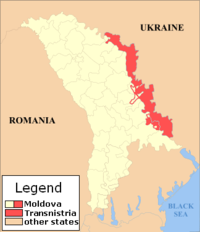 President of the unrecognised Pridnestrovian Moldovan Republic, also known as Transnistria, Igor Smirnov said that "the Russian leadership, in recognising the independence of Abkhazia and South Ossetia, has underlined the priority of the expression of the wills of the people for solving such problems."

On 27 August, the day after Russia's recognition, Dmitry Medvedev met with President of Moldova Vladimir Voronin, where the Russian leader made clear that Moscow is ready to make the maximal efforts to solve the Pridnestrovian problem in the framework of the sovereignty of the Republic of Moldova. Relations between Moldova and Pridnestrovia worsened after Moldova refused to support the independence of Abkhazia and South Ossetia, which Chişinău categorically rejected, considering that "as in the case of the recognition of Kosovo, this step only decreases amenability of the sides in the search for a compromise."[25]

Russia's recognition of the Georgian breakaway regions has given rise to talk of separatism in the Northern Caucasus within Russia's borders. According to a declaration addressed to the Council of Europe by Russian human rights activists, "the situation in the North Caucasus republics became greatly more agitated since the war between Russia and Georgia in the South Caucasus." In Ingushetia, Ingush opposition activist, Magomet Khasbiyev in an interview with radio station Ekho Moskvy called for Ingushetia to separate from Russia, claiming that "we must ask Europe or the US to separate us from Russia. If we aren't acceptable to this country, we don't know what else we should do."[26]

President Dmitry Medvedev does not express concern at the possibility of renewed separatist sentiments in the Caucasus and believes such scenarios can only arise from abroad. In an interview with Euronews he said that he "does not see any such danger so long as people abroad do not meddle in these issues, thinking up various scenarios for dismembering Russia."[27]

Georgian justice minister Nika Gvaramia claimed that “this will have very serious political consequences for Russia. We will overcome this crisis, I am sure; but what is Russia going to do with its own state – in respect of separatism, which is still a problem in Russia; I'm not worried much about it, but I am sure that it will lead to a total collapse of Russia if not today, tomorrow, for sure.”[28]

The Russian Federation argued that its decision to recognise Abkhazia and South Ossetia is based on the regulations of the United Nations Charter, a 1970 declaration on the principles of international rights relating to friendly relations between states, the Helsinki Accords and other international documents.[29][30]

Some experts[citation needed] have taken into consideration the history of the dissolution of the Soviet Union which has led them to the conclusion that the independence of Abkhazia and South Ossetia is entirely correct from a legal point of view. As a legal base they cite Articles 70 and 72 of the Constitution of the Soviet Union. Both Abkhazia and South Ossetia were autonomous inside of the Georgian SSR and had no right to declare their own independence from Georgia unless Georgia itself decided to abandon the Soviet Union. In that case the autonomous regions would have the right to decide their own statuses. These arguments were also used by Russian officials in the UN Security Council.[31]

On the other hand, the unilateral declaration of independences has been considered a violation of international law by many politicians and analysts, who argue that the recognition violates resolutions previously supported by Russia in the UN Security Council.[citation needed] When asked about these resolutions, Permanent Representative of Russia to the United Nations Vitaly Churkin claimed that "their use of force against South Ossetia clearly dashed all of those previous resolutions and created a completely new reality." However, France's deputy UN ambassador Jean-Pierre Lacroix countered that "there is no way you can dash or cancel or ... terminate a resolution of the Security Council by force."[32]