Birdwings are papilionid butterflies native to the Indian Subcontinent, mainland and archipelagic Southeast Asia and Australasia, and are usually regarded as belonging to three genera: Ornithoptera, Trogonoptera and Troides. Some authorities include additional genera. The exact number of species is debated, but most recent authorities recognize between 30 and 40. Birdwings are named for their exceptional size, angular wings, and birdlike flight.

Due to their size and bright colours, they are popular among collectors of butterflies, but all birdwings are now listed by CITES,[1] thereby limiting (and in the case of O. alexandrae completely banning) international trade.

Troides darsius, popularly known as the Sri Lanka Birdwing, is the National Butterfly of Sri Lanka.

Birdwings are typified by large size (up to a maximum body length of 7.6 cm or 3 inches and a wingspan of 28 cm or 11 inches in O. alexandrae), showy coloration (in contrasting shades of green, yellow, black, white, and sometimes blue or orange), and slender, lanceolate forewings. With few exceptions (i.e., the New Guinean O. meridionalis and O. paradisea), the hindwings lack tails. Sexual dimorphism is strong in Ornithoptera species only, where males are black combined with bright iridescent green, blue, orange or yellow while the larger and less colourful females are overall black or dark brownish with white, pale brown or yellow markings. 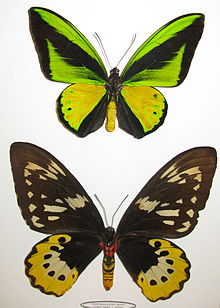 The male (above, dorsal surface) and female (below, ventral surface) Ornithoptera goliath are completely different, as is typical of species in the genus Ornithoptera.

The colours of most species are pigmentary (via papiliochrome); but two species, Troides magellanus and the much rarer T. prattorum, are noted for their use of limited-view iridescence: the yellow of the dorsal hindwings is modified by bright blue-green iridescence which is only seen when the butterfly is viewed at a narrow, oblique angle. This "grazing iridescence" is brought about through diffraction of light (after back-reflection) by the wings' extremely steeply-set, multilayered rib-like scales (rather than the ridge-lamellae of most other iridescent butterflies, such as Morpho species). Such limited-view iridescence was previously only known from one other species, the lycaenid Ancyluris meliboeus. In A. meliboeus, however, the iridescence is produced by ridge-lamellar scales and features a wider range of colours.

The close evolutionary relationship between Troides and Ornithoptera butterflies is well demonstrated by the fact that commercial breeders have produced numerous hybrid specimens between the two.

The final and smallest genus is Trogonoptera with just two species. They resemble each other, being overall black with iridescent green markings and a red head. Females are duller than males. 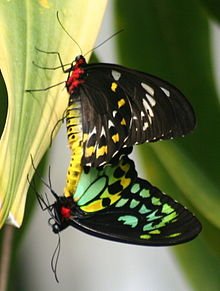 A mating pair of Ornithoptera euphorion (female above, male below).

Birdwings inhabit rainforests and adults are usually glimpsed along the forest periphery. They feed upon—and are important long-range pollinators of—nectar-bearing flowers of the forest canopy, as well as terrestrial flowers, such as lantana. They are strong flyers and seek sunlit spots in which to bask.

Breeding behaviour varies little between species: the female's role is relatively passive, slowly fluttering from perch to perch while the male performs an elaborate, quivering yet stationary dance 20–50 cm above her. After mating, females immediately begin to seek appropriate host plants; climbing vines of the genera Aristolochia and Pararistolochia (both in the family Aristolochiaceae) are sought exclusively. The female lays her spherical eggs under the tips of the vine's leaves, one egg per leaf.

The caterpillars are voracious eaters but move very little; a small group will defoliate an entire vine. If starved due to overcrowding, the caterpillars may resort to cannibalism. Fleshy spine-like tubercles line the caterpillars' backs, and their bodies are dark red to brown. Some species have tubercles of contrasting colours, or pale "saddle" markings. Like other members of their family, birdwing caterpillars possess a retractable organ behind their heads called an osmeterium. Shaped like the forked tongue of a snake, the osmeterium excretes a fetid terpene-based compound and is deployed when the caterpillar is provoked. The caterpillars are also unappealing to most predators due to their toxicity: the vines which the caterpillars feed upon contain aristolochic acid, a poisonous compound known to be carcinogenic in rats. The feeding caterpillars incorporate and concentrate the aristolochic acid into their tissues, where the poison will persist through metamorphosis and into adulthood.

Birdwing chrysalids are camouflaged to look like a dead leaf or twig. Before pupating, the caterpillars may wander considerable distances from their host plants. In O. alexandrae, it takes ca. four months to get from egg to adult. Barring predation, this species can also survive up to three months as an adult. 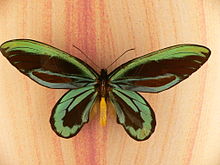 O. alexandrae has a very small distribution and is the only birdwing on Appendix I of CITES.

With the exception of Queen Alexandra's Birdwing (O. alexandrae), all birdwings are listed in Appendix II of CITES,[1] and accordingly their trade is restricted in countries that have signed the CITES convention. Exceptions are made for captive-reared specimens, which mainly originate from ranches in Papua New Guinea and Indonesia.[2] Most species of all three genera have now been reared in captivity, though with significant differences in the quantities reared of each species.[2] O. alexandrae is listed on Appendix I[1] and therefore cannot legally be traded internationally. At the 2006 meeting of the CITES Animals Committee some suggested O. alexandrae should be moved to Appendix II, as the conservation benefits of sustainable management perhaps are higher than those of the trade ban.[3]

Richmond Birdwing (O. richmondia) depend on the plant Aristolochia praevenosa which they need for their caterpillars. However, the very similar Aristolochia elegans (Dutchman's Pipe) which can be found in many Australian backyards, kills the caterpillars. 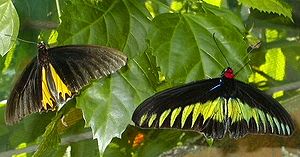 Troides helena (left) and a male Trogonoptera brookiana (right) in a Kuala Lumpur butterfly conservatory. Each represent a typical species from their genus. 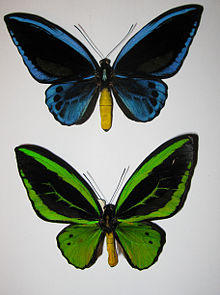 Males of the green O. p. poseidon and the blue O. p. urvillianus, showing some of the distinct variations in this species. The latter has sometimes been regarded as a separate species, but hybrids between these subspecies are fully viable.[4]

There are two Ornithoptera species, now regarded as hybrids: