Edward Laurence Doheny (August 10, 1856 - September 8, 1935) was an American oil tycoon, who in 1892, along with business partner Charles A. Canfield, drilled the first successful oil well in the Los Angeles City Oil Field, setting off the petroleum boom in Southern California.

At first he was an unsuccessful prospector in the state of New Mexico and Southwestern United States. Later Doheny became very wealthy through his California oil interests, and was also successful in the oil fields of Tampico, Mexico. During the administration of President Warren G. Harding, Doheny was implicated in the Teapot Dome Scandal and was accused of offering a $100,000 bribe to Secretary of the Interior Albert Fall in order to secure drilling rights without competitive bidding to the Elk Hills Naval Petroleum Reserve in central California. He was twice acquitted of offering the bribe that Fall was convicted of accepting. Doheny and his second wife and widow, Carrie Estelle, were noted philanthropists in Los Angeles. The character Vern Roscoe in Upton Sinclair's 1927 novel Oil! (the inspiration for the 2007 film There Will Be Blood) is loosely based on Doheny.

Doheny was born in Fond du Lac, Wisconsin to Patrick "Pat" and Eleanor Elizabeth "Ellen" (née Quigley) Doheny. His father was born in Ireland, and fled Tipperary in the wake of the Great Famine. Patrick tried whaling after leaving Ireland and arriving in Labrador.[1] His mother was born in St. Johns, Newfoundland, and was a former school teacher.[2] After Patrick and Ellen were married and moved to Wisconsin his father became a laborer, working construction, and a gardener.[3]

Doheny graduated from high school at the age of 15 and he was named the valedictorian of his class.[4] Following his father’s death several months after his graduation, he was employed by the U.S. Geological Survey, and in 1873 was sent to Kansas with a party surveying and subdividing the Kiowa-Comanche lands. The following year he left the Geological Survey to pursue his fortune prospecting, first in the Black Hills of South Dakota and then in Arizona Territory and New Mexico Territory.

He is listed in the 1880 United States Census as a "painter" living in Prescott, Arizona.[5] Later in 1880 he was in the Black Range in western Sierra County of southwestern New Mexico Territory, living in the rough silver-mining town of Kingston (about 10 miles (16 km) west of Hillsboro), prospecting, mining, and buying and trading mining claims. He worked in the famed Iron King mine, just north of Kingston, that drew men to the area. During his time in Kingston he met two men who would play important roles in his later life; Albert Fall,[6] the future Secretary of the Interior, and his business partner Charles A. Canfield.[7]

Doheny and Canfield together worked the former’s Mount Chief Mine with little success,[7] and thus in 1886 Canfield prospected further in the Kingston area, leasing and developing with great success the Comstock Mine (not to be confused with the Comstock Lode of Virginia City, Nevada). Doheny declined to join him in this venture, and whereas Canfield made a small fortune from it, Doheny was reduced eventually to doing odd jobs (including painting) to support his family.[8]

In the Spring of 1891, Doheny left New Mexico and moved to Los Angeles, California, attracted by Canfield’s success in Los Angeles real estate. Canfield had previously left New Mexico with $110,000 in cash from his Comstock Mine venture, a sum that he parlayed into extensive real estate holdings during the Los Angeles boom of the later 1880s. With the collapse of the speculative fever, Canfield lost his wealth and land holdings and, by the time Doheny arrived in Los Angeles in 1891, was deeply in debt.[9]

Briefly the two men tried their prospecting luck in the San Diego County area of Southern California, forming the Pacific Gold and Silver Extracting Company there, but without achieving success they soon returned to Los Angeles.[9] By 1892, Doheny was so poor he could not afford to pay for his boarding room.[10]

While in Los Angeles, Doheny found out that there were reserves of pitch (tar-asphalt) beneath the surface. Doheny obtained a lease near downtown with $400 in financing from Canfield, who had made some money from the mining industry. In the fall of 1892 Doheny dug a well with picks and shovels, and a windlass, looking for pitch, from which petroleum could be extracted. When the well (6 feet (1.8 m) x 4 feet (1.2 m) wide) reached a depth of 155 feet (47 m) Doheny devised a drilling system involving a eucalyptus tree trunk.[10] The well, when completed in 1893, reached a total depth of 225 feet (69 m) and produced 40 barrels per day (6.4 m3/d).

The first well dug in Los Angeles was in 1863, on Hoover Street, between Seventh Street and Wilshire Boulevard, by a man named Baker. But, Lionel V. Redpath, in his book Petroleum in California: A Concise and Reliable History of the Oil Industry of the State, states that the oil industry in Los Angeles began with the Doheny and Canfield[sic] well at the corner of Patton and West State streets. And although the well was a small producer, it pumped steadily for three years, and during that time period about three hundred more wells were sunk.[11] 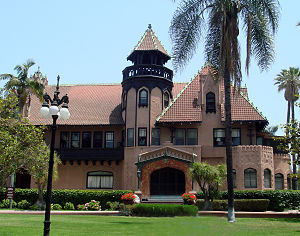 Doheny and Canfield soon made a fortune by drilling in the area and selling the oil to nearby factories. Later, they helped spur the California oil boom of the early 1900s by persuading railroads to switch from coal to oil as power for their locomotives.[10]

Doheny was also a pioneering oil producer in Mexico. His company drilled the Cerro Azul No. 4 well, which in February 1916 became the worlds largest producing well, pumping 260,000 barrels per day (BPD). When the well, drilled by Herbert Wylie, came in the sound could be heard 16 miles (26 km) away in Casiano, and shot a stream of oil 598 feet (182 m) into the air, sending oil in a two-mile (3-km) radius. Over the next 14-years the well would produce over 57 million barrels.[12]

He formed the Pan American Petroleum and Transport Company which would later become the Mexican Petroleum Company (PEMEX), to hold his two Mexican companies, Mexican Petroleum and Huasteca, and also his Atlantic and Gulf Coasts facilities in the United States, as well as his California holdings.[12] The company owned 600,000 acres (2400 km²) of land worth about $50 million and secured an additional 800,000 acres (3200 km²) in Mexico in October 1919.

He sold a majority (retaining a minority stake) of the family's shares in Pan American Petroleum & Transport to Standard Oil of Indiana, on April 1, 1925, but retained all the California assets, with which he formed his new company Pan American Western Petroleum Company. He essentially broke the company into two parts, Pan American Eastern Petroleum (the Mexico holdings, the Atlantic and Gulf Coasts holdings in the U.S., refineries, pipelines, and 31 tankers), which held the non-California assets, being sold to Standard. Pan American Western returning to its roots as an "upstream" exploration and production company.[13]

Doheny poses with his lawyer Frank J. Hogan in this 1924 photo

Doheny's reputation was somewhat tainted by a bribe paid to the Secretary of the Interior, Albert B. Fall. The "gift" of $100,000 was made in connection with obtaining a lease of 32,000 acres (130 km²) of government owned land used for the Elk Hills Naval Petroleum Reserve near Taft, California. The resulting scandal broke soon after that over similar bribes Fall accepted for leasing Teapot Dome in Wyoming. Doheny was charged with bribing Fall, but was acquitted. The scandal is also the inspiration for Upton Sinclair's novel, Oil!, based in part on Doheny's life.[10] The film There Will Be Blood (2007) was in turn loosely based on Sinclair's book.

Doheny, Sr., meanwhile, lived in his own mansion, which he had purchased in 1901.[15] Part of Chester Place, a gated community of Victorian mansions, Doheny ended up owning most of the houses, as well as the street, by the time of his death in 1935.[16] Built in 1899 in the French Gothic architectural style, this 3-story, 22-room residence was damaged in the 1933 earthquake but was repaired, and is now part of Mount St. Mary's College's campus, where it houses college departments, runs docent tours, and hosts chamber music concerts by The Da Camera Society.

The Dohenys also owned a great deal of coastal land in Dana Point, California, which was donated to the State of California for Doheny State Beach as a memorial to Edward's murdered son Ned. They also donated the funds for the construction of the original site of St. Edward the Confessor Roman Catholic Church, which has since moved to a bluff-top location overlooking Doheny State Beach. The original building is now home to San Felipe de Jesus Roman Catholic Church.

After he began basing his Mexican oil operations near Tampico, Tamaulipas in 1902, Doheny donated much money towards the construction and maintenance of the Cathedral of Tampico, also known as The Temple of the Immaculate Conception, located in Plaza de Armas.

The Doheny Estate has donated money for the construction of buildings and residence halls to Loyola Marymount University and the land for one of the campuses of Mount St. Mary's College south of downtown Los Angeles.

In 1944, Carrie Estelle Doheny suffered a hemorrhage, leaving her partially blind. Realizing the value of good vision, she created and funded the Doheny Eye Institute,[17] which today has become a world leader in vision research.

Doheny took his yacht, the Casiana (named after his first major producing oil well in Mexico, the Casiana No. 7), to Martinique to pick up a friend's brother who worked as a farmer on the island and who was seriously ill. Doheny brought him back to New York; the steam yacht was able to make the trip in only 5 days. 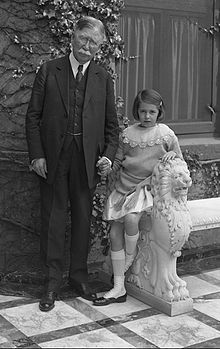 Edward L. Doheny and his granddaughter, Lucy Estelle, circa 1928

In 1883, in the Black Mountains town of Kingston in the New Mexico Territory, Doheny met and married his first wife, Carrie Louella Wilkins, on August 7.[18]

Their daughter, Eileen, was born in December, 1885.[18] Eileen was a frail child and died at the age of seven years old on December 14, 1892. Her death was caused by heart disease stemming from a rheumatism as well as a lung infection.[19]

Edward and Carrie's marriage was a fragile one, owing mostly to the harsh reality of mining life as well as their many financial problems.[20] Eileen's death further strained their marriage. Nearly one year after Eileen's passing, on November 6, 1893, Carrie gave birth to their only son Edward Jr, known as Ned.[21]

Edward and Carrie divorced in 1899, when Ned was six years old.[22] After losing custody of Ned and Edward's marriage to another woman, Carrie committed suicide the following year.[23]

Beset by shareholder lawsuits in the wake of Teapot Dome, and the death of Ned, Doheny became a recluse and invalid.[30] When she realized her husband needed an undisturbed home away for a while after the Teapot Dome travails and Ned's death, Carrie Estelle asked architect Wallace Neff to design and build the Ferndale Ranch complex on their Ojai, California property.[31] Hundreds of workers completed the 9,000 square feet (840 m2) house in less than six weeks, including Neff's blueprints, by working day and night.[16][32]

Edward L. Doheny died on September 8, 1935, of natural causes, a month after his 79th birthday. His funeral was in St. Vincent's Church in Los Angeles.[33]

Carrie Estelle Doheny, during and after her husband's death, was a major cultural philanthropist in Los Angeles, California. When commissioning new buildings for these civic projects she often chose the renowned Southern California architect Wallace Neff. Upon her death she left antiquities and funds to the Camarillo Catholic Seminary located in Camarillo, in Ventura County, Southern California

Edward and Estelle Doheny were the great-grandparents of Larry Niven (the science fiction writer),[34] and numerous Doheny descendants [35]