Matthew Paris (Latin, Matthæi Parisiensis, ie. Matthew the Parisian.[1]) (c. 1200 – 1259) was a Benedictine monk, English chronicler, artist in illuminated manuscripts and cartographer, based at St Albans Abbey in Hertfordshire. He wrote a number of works, mostly historical, which he scribed and illuminated himself, typically in drawings partly coloured with watercolour washes, sometimes called "tinted drawings". Some were written in Latin, some in Anglo-Norman or French verse. His Chronica Majora is an oft-cited source, though modern historians recognize that Paris was not always reliable. He tended to glorify Emperor Frederick II and denigrate the Pope.[2]

In spite of his surname and knowledge of the French language, Paris was of English birth, and is believed by some historians to be of the Paris family of Hildersham, Cambridgeshire.[3] He may have studied at Paris in his youth after early education at the St Albans Abbey School. The first we know of Matthew Paris (from his own writings) is that he was admitted as a monk to St Albans in 1217. It is on the assumption that he was in his teens on admission that his birth date is estimated; some scholars suspect he may have been ten years or more older; many monks only entered monastic life after pursuing a career in the world outside. He was clearly at ease with the nobility and even royalty, which may indicate that he came from a family of some status, although it also seems an indication of his personality. His life was mainly spent in this religious house. In 1248, Paris was sent to Norway as the bearer of a message from Louis IX to Haakon IV; he made himself so agreeable to the Norwegian sovereign that he was invited to superintend the reformation of the Benedictine monastery of Nidarholm outside Trondheim.

Apart from these missions, his known activities were devoted to the composition of history, a pursuit for which the monks of St Albans had long been famous. After admission to the order in 1217, he inherited the mantle of Roger of Wendover, the abbey's official recorder of events, in 1236. Paris revised Roger's work, and that of Abbot John de Cella, adding new material to cover his own tenure. This Chronica Majora is an important historical source document, especially for the period between 1235 and 1259. Equally interesting are the illustrations Paris created for his work.

The Dublin MS (see below) contains interesting notes, which shed light on Paris's involvement in other manuscripts, and on the way his own were used. They are in French and in his handwriting:

- it is presumed the last relates to Paris acting as commissioning agent and iconographical consultant for the Countess with another artist.

The lending of his manuscripts to aristocratic households, apparently for periods of weeks or months at a time, suggests why he made several different illustrated versions of his Chronicle. 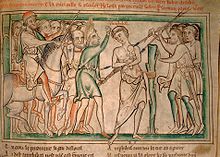 Martyrdom of Amphibalus from the Trinity College Life of St Alban. 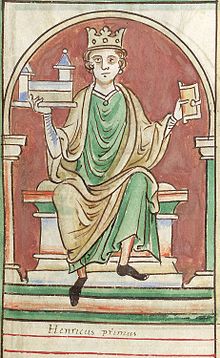 Henry I of England from British Library MS Royal 14.C.VII 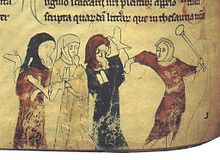 Paris's manuscripts mostly contain more than one text, and often begin with a rather random assortment of prefatory full-page miniatures. Some have survived incomplete, and the various elements now bound together may not have been intended to be so by Paris. Unless stated otherwise, all were given by Paris to his monastery (from some inscriptions it seems they were regarded as his property to dispose of). The monastic libraries were broken up at the Dissolution. These MS seem to have been appreciated, and were quickly collected by bibliophiles.[citation needed]

Also, Latin biographies of Stephen Langton and Edmund Rich, and a verse biography of Rich. Various other works, especially maps.

A panel painting on oak of St Peter, the only surviving part of a tabernacle shrine (1850 x 750 mm), in the Museum of Oslo University has been attributed to Paris, presumably dating from his visit in 1248. Local paintings are usually on pine, so he may have brought this with him, or sent it later.[12]

Paris as an artist 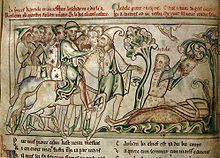 Framed tinted drawing of Heraclius taking down the head of Saint Alban, from the Trinity College Life

Recent scholarship, notably that of Nigel Morgan, suggests that Paris's influence on other artists of the period has been exaggerated. This is likely because so much more is known about him than other English illuminators of the period, who are mostly anonymous. Most manuscripts seem to have been produced by lay artists in this period. William de Brailes is shown with a clerical tonsure, but he was married, which suggests he had minor orders only. The manuscripts produced by Paris show few signs of collaboration, but art historians detect a School of St Albans' surviving after Paris's death, influenced by him.

In some manuscripts, a framed miniature occupies the upper half of the page, and in others they are "marginal" - unframed and occupying the bottom quarter (approximately) of the page. Tinted drawings were an established style well before Paris, and became especially popular in the first half of the 13th century. They were certainly much cheaper and quicker than fully painted illuminations.

Paris's style suggests that it was formed by works from around 1200. He was somewhat old-fashioned in retaining a roundness in his figures, rather than adopting the thin angularity of most of his artist contemporaries, especially those in London. His compositions are very inventive; his position as a well-connected monk may have given him more confidence in creating new compositions, whereas a lay artist would prefer to stick to traditional formulae. It may also reflect the lack of full training in the art of the period. His colouring emphasises green and blue, and together with his characteristic layout of a picture in the top half of a page, is relatively distinctive.

Paris as an historian

From 1235, the point at which Wendover dropped his pen, Paris continued the history on the plan which his predecessors had followed. He derived much of his information from the letters of important people, which he sometimes inserts, but much more from conversation with the eye-witnesses of events. Among his informants were Richard, Earl of Cornwall and King Henry III, with whom he appears to have been on intimate terms.

The king knew that Paris was writing a history, and wanted it to be as exact as possible. In 1257, in the course of a week's visit to St Albans, Henry kept the chronicler beside him night and day, "and guided my pen," says Paris, "with much goodwill and diligence." It is curious that the Chronica majora gives so unfavourable an account of the king's policy. Henry Richards Luard supposes that Paris never intended his work to be read in its present form. Many passages of the autograph have written next to them, the note offendiculum, which shows that the writer understood the danger which he ran. On the other hand, unexpurgated copies were made in Paris's lifetime. Although the offending passages are duly omitted or softened in his abridgment of his longer work, the Historia Anglorum (written about 1253), Paris's real feelings must have been an open secret. There is no ground for the old theory that he was an official historiographer.

Another elephant from the Chronica Maiora II, Corpus Christi College

Matthew Paris lived at a time when English politics were extremely involved. His talent is for narrative and description. Though he took a keen interest in the personal side of politics, his portraits of his contemporaries throw more light on his own prejudices than on their aims and ideas. Like most "historians" of the period, he never pauses to weigh the evidence or to take a comprehensive view of the situation. He admires strength of character, even when it goes along with a policy of which he disapproves. Thus he praises Robert Grosseteste, while denouncing Grosseteste's scheme of monastic reform. Paris was a vehement supporter of the monastic orders against their rivals, the secular clergy and the mendicant friars. He was strongly opposed to the court and the foreign favourites. He thought the king inadequate as a statesman, although had some feeling for the man.

He attacked the court of Rome with surprising frankness, and also displayed considerable nationalism. His faults are often due to carelessness and narrow views, but he sometimes invents rhetorical speeches which are misleading as an account of the speaker's sentiments. In other cases he tampers with the documents which he inserts (as, for instance, with the text of Magna Carta). His chronology is, for a contemporary, inexact; and he occasionally inserts duplicate versions of the same incident in different places. Hence he must be rigorously checked when other authorities exist and used with caution where he is our sole informant. Nonetheless, he gives a more vivid impression of his age than any other English chronicler.[citation needed]

The relation of Matthew Paris's work to those of John de Celia (John of Wallingford) and Roger of Wendover may be studied in Henry Richards Luard's edition of the Chronica majora (7 vols., Rolls series, 1872-1881), which contains valuable prefaces. The Historia Anglorum sive historia minor (1067-1253) has been edited by Frederic Madden (3 vols., Rolls series, 1866-1869).

Matthew Paris is sometimes confused with "Matthew of Westminster", the reputed author of the Flores historiarum edited by Luard (3 vols., Rolls series, 1890). This work, compiled by various hands, is an edition of Matthew Paris, with continuations extending to 1326.

Paris House at St Albans High School for Girls is named after him.