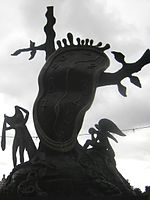 A sculpture of Dalí's The Persistence of Memory, in front of the Dalí Universe

Dalí Universe was a permanent exhibition of art works by the Spanish surrealist Salvador Dalí which was housed in a 3,000 square metre (32,000 square feet) suite of galleries at County Hall in London, England. It opened in 2000 and closed in January 2010. As stated on the website, it intends to re-open at a different location. Over 500 works were on display, including sculptures dating from 1935–1984, drawings, lithographs, gold and glass objects and a Dalí-inspired furniture collection. It did not feature major paintings except for a huge oil on canvas from Alfred Hitchcock film Spellbound (1945 film). The exhibition was originally curated by Beniamino Levi, who worked with Dalí on the development of his sculptures.

Dalí Universe was an exhibition at the County Hall Gallery, which also stages other art exhibitions, but it is better known under its own name.

Part of the collection is now in Venice for an exhibition still named Dalì Universe.

Dalí himself created the Teatre-Museu Dalí in his home town of Figueres in Catalonia. There is also a Salvador Dalí Museum in St. Petersburg, Florida, and a Salvador Dalí Gallery in Pacific Palisades, California, both in the United States. Paris is home to the Espace Dali, another independent gallery devoted to the works of the surrealist artist.