AlpInvest Partners is a private equity investment manager and at the end of 2009 globally managed over €42 billion (approximately $55 billion).

Founded in 1999, AlpInvest has historically been the exclusive manager of private equity investments for the investment managers of two of the world's largest pension funds Stichting Pensioenfonds ABP (ABP) and Stichting Pensioenfonds Zorg en Welzijn (PFZW), both based in the Netherlands. In 2011, the firm was acquired by a joint venture between AlpInvest management and The Carlyle Group.

AlpInvest has offices in New York, Amsterdam, Hong Kong and London with over 70 investment professionals and over 115 employees. 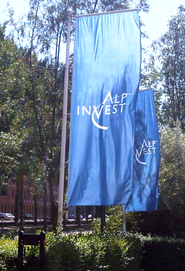 The company flag outside its office in Amsterdam

AlpInvest invests primarily in private equity limited partnerships and effectively acts as a fund investor, making commitments to private equity funds globally. Among the most notable firms with which AlpInvest is invested include: Kohlberg Kravis Roberts, Blackstone Group, Providence Equity Partners and TPG Capital as well as many of the leading middle-market private equity firms and venture capital firms.[5]

AlpInvest also invests directly alongside some of the largest private equity investors through an active co-investment program and will make mezzanine debt investments into companies owned by financial sponsors.[6]

Following this spin-off of its European middle market leveraged buyout platform, which was subsequently renamed Taros Capital, AlpInvest, by itself, no longer makes control investments directly in privately held companies, but rather invests alongside selected private equity managers.

ABP and PFZW collectively had assets of over $300 billion as of December 31, 2009 and are among the largest pension funds in Europe.

AlpInvest has not historically solicited capital from other investors or institutions.

The logo used by Alpinvest N.V., a publicly quoted investment vehicle and predecessor of AlpInvest Partners

AlpInvest as it is currently known, was established in 1999 as an initiative by its two sponsors, the Dutch pension funds ABP and PFZW (then PGGM), to create an independent and professional manager for their private equity allocations.[7]

AlpInvest's predecessor, NIB Capital Private Equity, originally operated as one integrated investment firm with distinct teams focusing on fund investments as well as lead buyout investments in mid-sized companies located in the Benelux and Germany. As the firm evolved, AlpInvest shifted its focus toward an expansion of its investment management business.

Today, AlpInvest focuses exclusively on its investment management business as a fund investor as well as secondary investor and equity and mezzanine co-investor and has grown into one of the largest investors in the private equity asset class.

The headquarters of AlpInvest in Amsterdam

The following is a timeline of significant milestones: 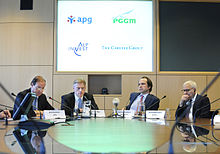 Press conference announcing the creation of a joint venture with The Carlyle Group.

In recent years, AlpInvest has won several industry awards based on its position as a leading limited partner.

* This award was initiated in 2005. AlpInvest was the first recipient.

AlpInvest is among the largest investors in private equity funds, globally, historically allocating as much as €4 billion per year to leveraged buyout (large-cap, middle-market, lower middle market), venture capital and special situations funds, among other strategies. AlpInvest maintains relationships with many of the leading managers in difficult to access segments of private equity. In many cases, AlpInvest is a strategic investor and tends to be among the largest investors in each fund in which it invests. AlpInvest follows a deliberate allocation process that includes a top-down segment analysis and bottom-up general manager selection. The firm's funds team is made up of more than 25 professionals based globally in Europe, North America and Asia.

The following is a list of selected, notable private equity firms, with which AlpInvest has disclosed an investment as a limited partner, through its primary and/or secondary investment practices (the total list includes over 250 firms):

In the secondary market, AlpInvest operates as an independent investment group with a large dedicated team, comparable to other leading secondary firms and is one of the largest buyers of private equity assets in the secondaries market.[23] AlpInvest's secondary investments include purchases of limited partnership interests, spin-outs of captive private equity groups, stapled secondary transactions, securitizations, joint ventures and secondary direct transactions.

Although most secondary transactions are kept confidential, the following transactions have been disclosed[24]:

AlpInvest traditionally invests alongside leading financial sponsors in leveraged buyouts and growth capital transactions. Since inception, AlpInvest has invested more than €3 billion in over 100 transactions and is among the most active co-investors in private equity transactions. The firm's dedicated co-investment team is made up of more than 25 professionals across its equity and mezzanine products operating in Europe, North America and Asia.

The following is a list of selected notable companies that AlpInvest has invested in alongside other private equity general partners, either as an equity co-investor or as a mezzanine debt provider: