Disney's Pop Century Resort is a resort at the Walt Disney World Resort. It is one of four hotels that make up the "value resort" group, along with the Disney's All-Star Sports Resort, Disney's All-Star Movies Resort, and Disney's All-Star Music Resort. The hotel is themed around different decades in American pop culture. Much like the other resorts within the value category, there are giant versions of various items built around the hotel.

The resort was originally planned to open in 2001, though the opening was eventually delayed to March 2002.[1] It was delayed once more before accepting reservations on April 22, 2003 and opening on December 13, 2003.[2]

Each themed area features motel-style buildings adorned in gigantic (over 3 meters) phrases and iconography of the particular decade being represented. The resort has 2,880 rooms in ten separate buildings, three pool areas, and one central area, named "Classic Hall", that houses the front desk, gift shop, arcade and food court. The buildings are four story versions of the three story All-Star Resort buildings.

Disney Transport buses provide scheduled service between the resort hotel and the theme parks, water parks, and Downtown Disney. The resort has laundry facilities and babysitting options available. It also has pizza delivery to guests' rooms as well as cable television. Internet access and refrigerators are available at a charge.[3]

In the Classic Years section of the resort, each area is themed with a specific decade and giant items related to that decade. This was originally one of two planned construction phases for the resort, but has become the only completed area of the resort due to a scaling-back of the project.

The Classic Years area has several shopping and dining locations, including the following: 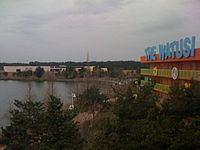 The original plans for the resort included a second phase of units themed to the Legendary Years, which would have included 1900-1940s themed areas. These rooms would have resided across a lake from the Classic Years section, and would be connected by bridge to that section. Construction for both phases were started at the same time, but after the September 11 attacks, Disney scaled back the hotel due to the reduction in tourism.

The Classic Years section opened in 2003, while the Legendary Years lobby building, to be called "Legendary Hall", and of few of its buildings were left uncompleted. Initially, the completed resort was to have an additional 2,880 rooms on the Legendary side, configured identically to the Classic side. The parking lot for the expansion was completed during the earlier phase of construction, and occasionally is used as overflow parking for the ESPN Wide World of Sports Complex.

On May 12, 2010, Disney Parks announced plans to complete the remaining section of the resort as a separate value-priced resort known as Disney's Art of Animation Resort.[4] It will be based on four of Disney and Pixar's most popular films: The Little Mermaid, The Lion King, Finding Nemo and Cars.[4] However, to distinguish it from Pop Century, the hotel will have 1,120 suites, designed for up to six people. The remaining 864 rooms will be a standard value-resort size.[4] The addition of suites was based on positive guest responses after a number of hotel rooms at Disney's All-Star Music Resort were combined to form larger accommodations.[4] Construction began in the summer of 2010, with the resort opening in 2012.[4]