Disney's Beach Club Resort is a beach-themed deluxe resort at the Walt Disney World Resort. It opened on November 19, 1990. The resort is owned and operated by Walt Disney Parks and Resorts. 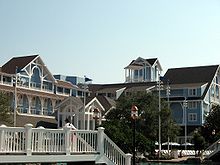 This hotel was designed by Robert A.M. Stern.[1] It is themed after seaside cottages found in Newport at the turn of the century, with the guest rooms following suit.[citation needed] The resort's light blue motif distinguishes itself from the distinctive gray siding with red and white striped awnings of Disney's Yacht Club Resort.

Boat transportation from the resort runs to Epcot and Disney's Hollywood Studios as well as Disney's BoardWalk Resort and the Walt Disney World Swan and Walt Disney World Dolphin resorts. The resort is about five minutes walking distance from Epcot, and roughly fifteen minutes walking distance to Disney's Hollywood Studios. Guests can use the International Gateway entrance to Epcot in World Showcase between the France and United Kingdom pavilions.

There are both standard rooms (two queen-size beds or one king-size bed) and suites. The resort also offers a fifth floor Concierge Level with private floor access, a concierge lounge, turn-down service, and other amenities. The Concierge Level is home to the resort's Presidential Suite. All rooms were renovated in 2009. 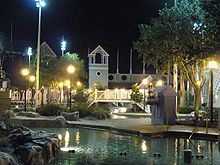