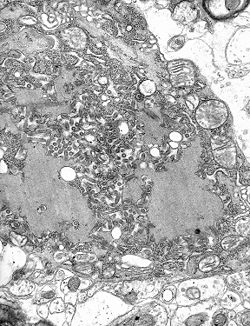 Description: This micrograph depicts the histopathologic changes associated with rabies encephalitis prepared using an H&E stain. Note the Negri bodies, which are cellular inclusions found most frequently in the pyramidal cells of Ammon's horn, and the Purkinje cells of the cerebellum. They are also found in the cells of the medulla and various other ganglia.

Negri bodies are eosinophilic, sharply outlined, pathognomonic inclusion bodies (2–10 µm in diameter) found in the cytoplasm of certain nerve cells containing the virus of rabies, especially in Ammon's horn of the hippocampus. Often also found in the cerebellar cortex of postmortem brain samples of rabies victims.

They are named for Adelchi Negri.[1]