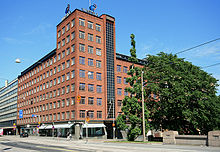 Wärtsilä is a Finnish corporation which manufactures and services power sources and other equipment in the marine and energy markets. The core products of Wärtsilä include large combustion engines. The company employed 17,528 workers in more than 70 countries at the end of 2010, and its headquarters are located in Helsinki.

The environmental services range from reduction of air emissions, such as NOx, SOx, CO and VOC's, to oily waste water treatment and other water solutions.

Wärtsilä was an important Finnish shipbuilder 1935–1989, building e.g. cruiseferries and a large share of the icebreakers of the world. The shipyards are now owned by STX Europe.

Wärtsilä is a leading provider of power plants in distributed and flexible power generation.[3]

Their product porfolio consists of installations up to 500MWs, running on most fossil fuels, such as diesel, oil, natural gas, fuel-oil, biofuel and liquefied natural gas (LNG). In addition for the reliability of traditional base power generation, the engines have the capability to start and stop quickly and they maintain their effiency in part load, which makes them well suited for peaking power production, smart grids and emergency power systems. They can also utilize the combined cycle and cogeneration to produce steam or hot water for heating, and trigeneration for chilled water, which can be used in e.g. air conditioning.

The Emma Mærsk is powered by Wärtsilä engines

Wärtsilä engines are mainly used for marine propulsion and for electricity generation. The engines that Wärtsilä produces range from the 4L20, a four-stroke, medium-speed engine producing 720 kW (970 hp), to the Wärtsilä-Sulzer RT-flex96-C two-stroke diesel engine series, which is considered the most powerful prime-movers in the world.[5] This model has a cylinder bore of 960 mm (37.8 in) and stroke of 2500 mm (98.4 in). The largest version produces up to 84,420 kW (114,800 bhp) in the 14-cylinder configuration. These engines are used to propel large container ships, such as those of the A. P. Moller-Maersk Group. The vessels are known as the E-class ships; Emma Maersk was the first.

Wärtsilä produces a full line of four-stroke medium-speed engines, many of which are multi-fuel capable (Diesel fuel, heavy fuel oil, vegetable oils, and natural gas), ranging up to the 20V46F, which produces 23,000 kW (31,000 hp) operating at 600 RPM.

All numbers are shown excluding non-recurring items and selling profits

2011 : Wärtsilä opens its global logistic center at Kampen, the Netherlands.

2010 : Majority of the propeller production and auxiliary engine production was moved to China.

2006 : The Ciserv-group was integrated into the Wärtsilä Services organisation. Wärtsilä let go the brand names Ciserv and Sulzer;

2003 : Wärtsilä Ltd is caught up in Sweden's largest ever bribery prosecution. Wärtsilä found not guilty in all instances in the so-called Gotland case.

2002 : The Ciserv-group, led by Mr. Pierpaolo Barbone, expanded in Singapore, Denmark, and Canada. Wärtsilä acquired John Crane-Lips, which operates within Wärtsilä under the name Wärtsilä Propulsion.

1999 : The split of the Cummins-Wärtsilä joint venture.

1997 : In April, Wärtsilä Diesel absorbed the former Swiss-based Sulzer Brothers Ltd. division called New Sulzer Diesel (NSD) to form Wärtsilä NSD. The reference to the name "Sulzer" is until q1-2006 used in the designation of engines Wärtsilä inherited from the absorption of New Sulzer Diesel. Wärtsilä NSD Corporation is created.

1991 : Imatra Steel is created when Ovako AB is split up between its owners, Metra and SKF.

1988 : A company is set up in India and floated on the Bombay Stock Exchange.

1938 : Wärtsilä signs a licence agreement and the first diesel engine is built in Turku in 1942.

1936 : Acquisition of the Onkilahti engineering workshop in Vaasa.

1898 : The sawmill and iron works company is renamed Wärtsilä Ab.

1834 : Establishment in the municipality of Tohmajärvi.