The Cupa României (English: Romanian Cup) is a football competition which was held annually since 1933-34, except during the World War II. It is the country's main cup competition, and it is open to all clubs affiliated with FRF (Romanian Football Federation) and the county football associations regardless of the league they belong to. Currently, the winner of the competition is granted a place in the play-off round of the Europa League. The cup is sponsored by the Timişoreana beer brand, hence the name Cupa României Timişoreana.

Most finals have been held at the Stadionul Naţional (formerly known as "23 August"), and occasionally at other stadiums in Bucharest. During the construction of the new Stadionul Naţional, the final was staged each year in a different major city of the country. In 2007, the final was held in Timişoara at the Dan Păltinişanu stadium, this being the second occasion when the last game was played outside Bucharest (the first occurrence taking place in 1989, when Braşov hosted the event). Then, the next three finals were staged in Piatra Neamţ, Târgu Jiu, Iași and again in Braşov.

The 2012 final is due to be staged on the newly-finished Cluj Arena.

On 22 July 2005, FRF and Samsung Electronics signed a one-year sponsorship deal. The name of the competition was changed to Cupa României Samsung.[1]

On 9 October 2006, FRF and Ursus Breweries (part of the SABMiller group) signed a sponsorship agreement for the next three seasons. Ursus Breweries changed the name of the competition to Cupa României Timişoreana, after the Timişoreana beer brand.[2][3]

The competition often suffered minor changes in format over the last seasons. The following format came in use in the 09-10 season. The main differences between the current system and the last one are the dates at which rounds take place, and the two-legged format of the semifinals.[4]

The competition at this phase is organized by the county football associations. 42 teams (one from each county) will advance to the next phase. 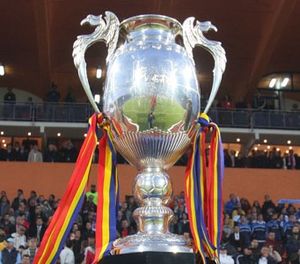 The competition at this phase is organized by the Romanian Football Federation. For the first five phases, teams are paired using geographical criteria in order to avoid long travel distances. The teams from a lower division or with a lower ranking in the last league season host the games.

Starting with this round a seeding system is used for the draw, as follows:

Every year, based on the national and international football calendar, FRF's executive committee may choose a two-leg or one-leg system for the Round of 16, quarterfinals and semifinals.[5] Games at these stages are, when played using a one-leg system, hosted by a neutral venue. The final is held at a pre-established venue, normally in Bucharest.

The following table sorts cities by the number of Cups won by local teams. Bucharest, hosting the three most decorated sides in the competition and having staged the majority of the Cup finals, is easily the most prolific city.