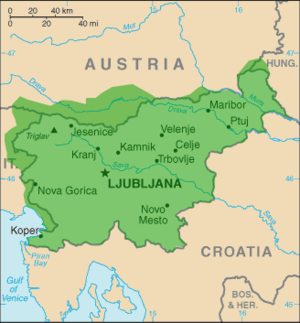 Slovene Lands or Slovenian Lands (Slovene: Slovenske dežele or shortly Slovensko German: Slowenische Länder or archaically Windische Länder Italian: Terre slovene) is the historical denomination for the whole of the Slovene-inhabited territories in Central Europe. It more or less corresponds to modern Slovenia and the adjacent territories in Italy, Austria and Hungary in which autochthonous Slovene minorities live.

Like the Slovaks, the Slovenes preserve the self-designation of the early Slavs as their ethnonym. The development of a separate Slovene ethnic identity is due to Primož Trubar (1508–1586). But the term Slovenia ("Slovenija") was not in use prior to the early 19th century, when it was coined for political purposes by the Slovenian romantic nationalists, most probably by some pupils of the linguist Jernej Kopitar.[1] It started to be used only from the 1840s on, when the quest for a politically autonomous United Slovenia within the Austrian Empire was first advanced during the Spring of Nations. "Slovenia" became a de facto distinctive administrative and political entity for the first time in 1918, with the unilateral declaration of the State of Slovenes, Croats and Serbs, that Slovenia.[2]

Although Slovenia did not exist as an autonomous administrative unit between 1921 and 1941, the Drava Banovina of the Kingdom of Yugoslavia was frequently called simply "Slovenia", even in some official documents.[3][4][5]

Consequently, most Slovenian scholars prefer to refer to the "Slovene Lands" in English rather than "Slovenia" to describe the territory of modern Slovenia and neighbouring areas in earlier times. The use of the English term "Slovenia" is generally considered by Slovenian scholars to be anachronistic due to its modern origin.[6] 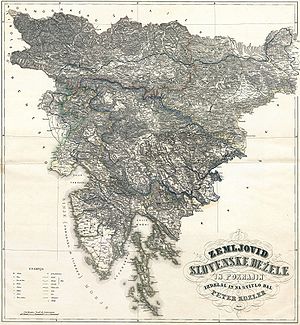 In the 19th century, the territories regarded as part of the Slovene Lands were:[7]

The Žumberak and the area around Čabar, which today belong to Croatia, were long part of the Duchy of Carniola, and thus generally regarded as part of the Slovene Lands, especially prior to the emergence of Romantic nationalism in the 19th century, when the exact ethnic border between Slovenes and Croats had not yet been specified.

Not all of the territories referred to as "Slovene Lands" have always had a Slovene-speaking majority. Several towns, especially in Lower Styria, maintained an German speaking majority until the late 1910s, most notably Maribor, Celje and Ptuj.[8] The area around Kočevje in Lower Carniola, known as the Gottschee County, had a predominantly German-speaking population between the 14th century and 1941 when they were resettled in an agreement between Nazi German and Fascist Italian occupation forces.[9] A similar German "linguistic island" within an ethnically Slovene territory existed in what is now the Italian comune of Tarvisio, but used to belong to the Duchy of Carinthia until 1919.[10] The city of Trieste, whose municipal territory has been regarded by Slovenes to be an integral part of the Slovene Lands, has always had a Romance-speaking majority (first Friulian, then Venetian and Italian).[11] A similar case is that of the town of Gorizia, which served as a major religious center of the Slovene Lands for centuries, but was inhabited by a mixed Italian-Slovene-Friulian-German population.[12] The towns of Koper, Izola and Piran, surrounded by an ethnically Slovene population, were inhabited almost exclusively by Venetian-speaking Italians until the Istrian exodus in the late 1940s and 1950s, as were large areas of the comune of Muggia. In southern Carinthia, a process of Germanization started by the end of 1840s, creating several German-speaking areas within what had previously been a compact Slovene territory. Since the late 1950s, most of southern Carinthia has had a German-speaking majority, with the local Slovene minority living in a scattered pattern throughout the area.[13]

On the other hand, other areas with historically important Slovenian communities, such as the Croatian cities of Rijeka and Zagreb, as well as the Slovene villages in the Somogy county of Hungary (the Somogy Slovenes) were never regarded to be part of the Slovene Lands.[14] The same goes for the Slovene communities in south-west Friuli (in the villages of Gradisca, Gradiscutta, Gorizzo, Goricizza, Lestizza, and Belgrado in the lower Tagliamento area) which extinguished themselves by the end of the 16th century.[15]